Two rides in one

I left for my ride a little early today. *NOW* it's beautiful out. Then it was cloudy and cool. I thought it would be perfect, but I didn't realize how windy it was outside the city.

The first 19.1 K (out to 22) took an hour, trying to keep the heart rate low. I was getting an ear ache listening to the wind. Even though I'd worn a long sleeved shirt I was wishing I'd worn another layer. Then I turned around, and made it home again in 38 minutes, hardly pedaling at all, it seemed. At one point I was doing 40 Kph, pedaling easy, heart rate below target, and it was dead calm for me. I'm guessing the wind was between 30 and 40 Kph.

Coming back was sure a nice ride, even if a guy tried to kill me at the lights as I was turning left at 37 st. Here's a screen shot of the intersection. 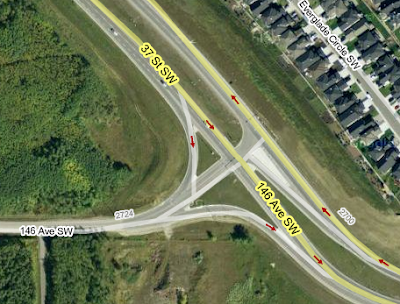 Sitting there, with his left turn signal on, the light turns green, and I'm coming down 146th. I get tucked in and all ready to follow him around and to the left. Then he turns right. He didn't look, he just did it. Fortunately I was just far enough away that I could move to the left to get around him and there was no traffic behind us. If I'd been 10 feet more forward I'd have been in his blind spot and I'd have been creamed. Just a reminder, pay attention to the traffic!

5 min for an easy relaxed transition.

Then I got set up, and started an easy run. I was thinking about the various elements of Chi Running, and it worked out fairly well. It seemed slow because I was trying really hard to keep my heart rate below 125, and didn't quite make it. Mostly it was between 125 and 130. It took a while to settle into an easy run, but I could feel the rust flaking off. The 5 K took 38:21. It felt good, but I wanted to run just a bit faster, and I think it would have been easier to settle into a stride.

Walked after and did some stretching and core for 30 minutes.