Last year as an experiment I stained one of the gates to our back yard. We weren't sure how it would look or wear. A year later we're pretty pleased. I finally got around to finishing off the can from back then and did the pergola thingie above that gate, then worked my way along the top weather edge of the fence. I got almost all the way around.

Last week I got two more cans. I figured one can for the other gate and pergola thingie, and the other for the rest of the fence that we decided to do. It didn't work that way. I'd pressure washed the fence and blew off most of the guck, so it sucked up the stain like nobodies business. I started with the pergola thingie, and got half the gate done with the first can. That was a good time to stop for lunch. The other can finished the gate, and got me most of the way around the fence.

Linda had arrived home, and picked up another can on her second round of errands. That finished the fence, plus some spots I'd missed, plus some spots that had really sucked up the stain and could use a little more.

After a shower I've been sitting out in the shade, drinking a beer, and working on my novel. Sort of. Then this blog. Mainly the beer, and looking at the one pergola thingie that's right in sight, wondering if I missed a spot or if it's just a trick of the light.

My work contract at work is drawing to a close. The contract goes till the end of the month, and I've already been told it won't be renewed. That's fine. I think we're in hand to have it done. It's been interesting, both from a data perspective and from a process perspective. It's been nice to have a contract where there is a defined deliverable.

The data piece is a classic example of what happens when you implement a database without a plan. They ended up with overlapping data in the source and target databases, had trust issues with both sets of data, and the ID numbers that related the two databases were, shall we say, not as easy to work with as one would like.

The process piece was just observation on my part. I didn't have to come up with the process, just follow it. Much of it makes sense, given the limitations they were working under, but had I been involved earlier I would have pushed hard on the limitations.

It's been good, I've enjoyed it, I've met some interesting people, I've been getting paid, so it's a big win all around. There is a related project that is firing up, so it will be interesting to see if they want to involve me in it. If they don't, it will totally break my heart to be not working during the summer. I can see where my camera is going to get a lot of use. And if they do, we can talk about the exact circumstances.

I've thought lots about databases of things, over the years. The ones I'm most familiar with are for things in the oil and gas industry, pressure vessels, tanks, and safety valves, along with a side of pipeline. You'd think it would be easy. All of them but the pipeline have, or had, nameplates that include unique identity information. The manufacturers provide huge binders of information about them. Some of the things move, but that's a bit of a big deal needing paperwork to track it. These things all need periodic inspection and servicing. You'd think there wouldn't be issues about this, but every company I've worked for has had me figuring out how to improve their data integrity.

I recall one company that was supposedly sending us data about vessels. One of the numbers is very important. It starts with the letter A with a circle around it, and there are a set number of digits. It's stamped bigger than all the other numbers on the name plate. Sometimes it's stamped into the vessel itself. This company was giving us all the numbers in a spreadsheet, and I wasn't believing them. for a start, they weren't including the A number, and some of the other ones looked funny. Then we found a photo of the name plate for one of the vessels in their xl file. The name plate had the A number, prominent as usual, and they'd ignored that and made a mistake on the serial number. Plus, they missed the biggest single thing on the lease, a vessel about 20 meters long and 3 meters in diameter. We didn't use their data and argued about paying them for it.

It's surprisingly difficult to get the data into a database correctly, and to keep it up to date. I suppose when you have about 100,000 of those things it's easy to have some slip into the cracks and hide. But as I say, if they didn't have problems doing this, I'd have to get a real job, one that probably wouldn't pay as well and be harder to do. Plus lots of people seem to have difficulty in comparing large data sets. I do spreadsheets to help explain, and that seems to make their eyeballs spin. So I suppose if I wasn't doing it, someone less good at it, who didn't enjoy it as much, would have to do it, and it would probably leave a stain on their soul or something.

You might be scrolling down, wondering when you're going to get to a photograph. I'll take that as a compliment. I've been a bit remiss on Instagram, and one of my family yanked my chain about it. It's just that it's such an enormous pain in the behind to put a photo on Instagram from a desktop computer. That's where my good photos are. I hardly take any photos with the iPhone anymore.

Part of that is that the iPhone is pissing me off a lot lately. It doesn't like my fingerprint anymore, but if I bend over the wrong way Siri is saying she didn't get that. Or my credit card comes up because it thinks I'm trying to pay for something. I don't have the first idea how to use Apple Pay intentionally. I'm beginning to think it's overkill for what I need. Texting is the big thing I probably use the most. I mostly delete the emails I get, unless it's something important. I get so many crap emails because of subscriptions. I've got them filtered on the home computer, but why can't I do that on the phone? Fortunately deleting them is fast.

Let's see. A little bit of phone Facebook goes a long way. The calendar is important. Every now and then the map is useful, or I need a calculator or access to the internet to ask Mrs Google something. I use the parking app every work day. It's still a remarkable device, but somehow it trying to be helpful just annoys me. Like when it pops up to suggest a route home, when there is nothing on the calendar about going home, and I know the way perfectly well.

So what have the Roman's ever given us?!

Yes, I know, you're waiting for the photograph, and losing patience. Tough. My shoulder's are feeling cranky just now, and I don't feel like sitting inside at the desktop computer to edit photos. I'm outside, just finishing my well deserved beer. Darn right it's well deserved! 2.5 quarts of stain in the hot sun. Imagine that, actual quarts. I'm not sure how they get away with that. A liter is a much more convenient size. Did you know there is a word for two quarts? Really. A gallon is 4 quarts, some of you know that, if you're my age or almost so. But 2 quarts is a pottle. Really. And I didn't even have to ask Mrs Google.

The whole Imperial measurement system is a crock, and we need to finish the job of moving to SI. If we'd done it back in the 70's it would all be over now. Only the geezers would know what a quart is, or how many pecks to a bushel, or the difference between Imperial and American gallons, or how far a mile is, or how many furlongs in a mile, and all sorts of useful stuff. (Hint, I'm being sarcastic.)

Oh all right. Here's the pergola thingie I was talking about, or one of them. I suppose the best part about today is that I didn't fall off the ladder while staining them, or give myself any slivers, or get a sunburn. So it's all good. I've been waiting all this time for the devices to talk to each other, and finally! You'll just have to wait for the flowers, and more abstracts. 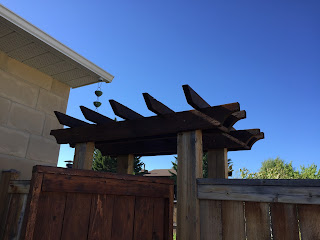