It's a beautiful quiet evening, perfect for BBQ (rack of lamb, if you were wondering) then sitting outside relaxing. I'm writing, Linda is reading. It's been a busy day.

How did this first day of retirement go? Fun. It started at 3am. Yes, the middle of the night for many of you. I was downtown in East village a little before 5am to help a buddy with a photo-shoot. A local politician is already working on campaign materials. Probably they all are. We shot in East Village, Kensington, Crescent Heights, East Village again, and a SW office building.

It was a lot of fun! Mostly I was a Sherpa, packing and carrying and holding. A couple times I was a photo prop "Look at Keith, walk towards Keith", but (thankfully) wasn't in any of the photos. There was real talent for that.

Then into the pool, chasing my buddy Katie. I think she was taking it easy today, since I was able to keep up for 100 m at a time, with a long rest while she swam another 100 m. Then to Resolve to get a print organized for a buddy. I love dealing with them.

Home, a quite time with the cats, then the BBQ. Well, there was some photos in there of my own, and some editing. Buildings are hard, trying to get the right perspective when you're looking up. I've been looking down on these cranes for 5 months, and yesterday I walked around them a bit before going into work. 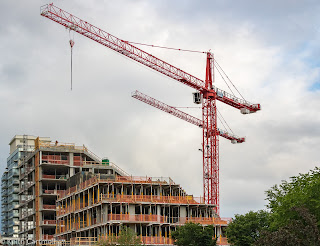 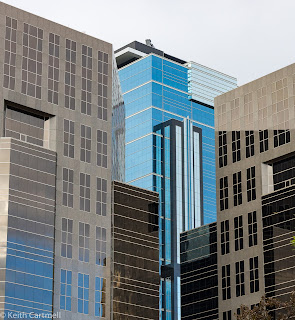 Tomorrow is going to be the ceremonial sleep in. Count on it. Hope to see you out and about celebrating tomorrow. It's odd, I can clearly remember some of the 100 year celebrations stuff, reading about it and seeing it on TV. The song is running through my mind right now. 50 years has passed so quickly.

Somewhere about then I remember a discussion with my mom about how old we would be in 2000. That seemed like forever away. She did the math, and said I would be 42; an incomprehensible number for a kid. She wasn't even 42 then, since of course she would be 28 in 2000. And her mom was still alive then, and (last I checked) is still around, closing in on 100.

Which got me thinking, and I found the obituary for my great-grandmother. I had not known this. There could have been, but I don't think there is, a photo of her and me, with the intervening generations. Now there could be a photo of my grandmother, my mom's sister, my cousin, her daughter, and her daughter's son. There is a photo with 4 of them.