That's what the sign says. The problem is that some of those roads look so darned inviting! Sometimes before the end, there are spectacular views. You never know. I was out for a photo tour today. Down Road to Nepal, past Leighton, across 22, out near Priddis Greens, down 762, out 549 to off road vehicles, down 762 some more, found 546 after some meandering, tried to do the Millerville half backwards from the midpoint, took the scenic route to the starting line, then found the course does not follow the roads, picked it up at the halfway point, along the road they fixed so I'll ride on it now, up Road to Nepal, and home again 123 photos later. Nice, clear succinct directions if you want to get some spectacular mountain photos. Mine aren't, wrong time of day. But get there at the right time of day, on the right day, and you'll get your socks blown off. Or you might freeze to death or get eaten by a bear. You never can tell.

Some people would have shifted their camera a little to the north to avoid that stack. I like the contrast between the somewhat tamed nature, the raw mountain nature, and a gas plant nestled in the middle of it all. Quirk Creek, if you're interested. 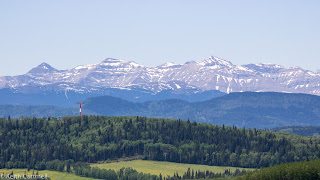 This is part of the half marathon I'll be (insert the optimistic verb of your choice here) on the 17th. This won't be my view though. That hill in the distance will be lost in the heat shimmers. No, the finish line is nowhere in sight. Not even close. 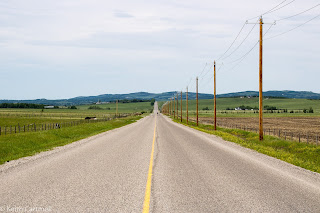 Here's a couple more along the way. I love the promise of the mountain between the trees and over the hill. 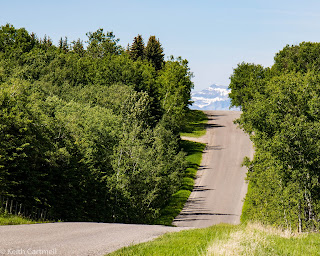 Other than being a raptor of some kind, I've no real idea what kind of bird this is. A hawk? 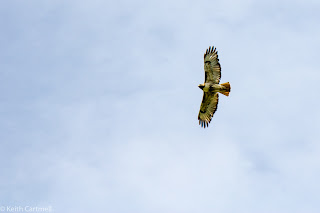 I loved driving along the mostly quiet roads, singing along to the tunes, looking at the ever changing view. Stopping every now and then for photos. I've got a bit of a backlog. I'll get to it soon. Promise. As soon as Curtis stops using the trackpad for a pillow. Really.