Driving to the mountains?

It looks like this road loops around a bit, and will take you to those beautiful mountains. 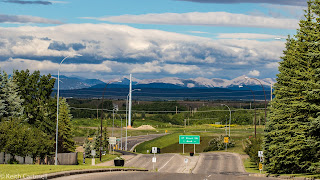 Looks can be deceiving. That sign that indicates you have to turn left or right is not kidding. Just past where the road dips down, you come to a T intersection.

Technically, I suppose the road continues on and curves around to the right, but there's some big concrete barricades to prevent traffic. This will eventually become a business access road for the Tsuut'ina, but thats all tangled up with the ring road construction. They say they are going to build a huge medical centre there. If it takes as long as the road negotiations, it will be too late for me. Hopefully they'll get it built just about the time I need it.

Traffic is going to be hell here for the next few years. There are only 2 ways out of Woodbine. One is the road in the photo above. There is major freeway construction already happening. The other is 24th St onto Anderson road. Anderson is going to be widened to 6 lanes over the next few years. Why yes, I'm glad to be retired and not likely going anyplace in a hurry.

In one sense it will be nice to have the ring road done. They've been talking about it for most of my lifetime, and now it's time to spend the money. I suppose with the improvements in technology we will get a better road, and the environment will be treated more respectfully now than say in the 70's. Back then the plan was to bulldoze anything in the way of a direct route and it didn't matter if it was a natural area or a neighbourhood.

In another sense, it's symptomatic of our car culture, and the sickness of it in Calgary. That new road won't take me anywhere I need to go. At best it might take some cars out of my way for the places I do want to go, but I'm not likely to notice. I suppose once it's built it will be easier to get up to highway 1 to go towards Banff. But I'll bet money that it will quickly become just as clogged as all the other roads in town. More roads generate more traffic.

But really, I'm getting my head to a place where we shouldn't be burning fossil fuels. Not for propelling vehicles, or heating buildings or generating power. Solar and wind power are coming on huge, and Alberta gets lots of wind and sun. The quicker we get the coal fired plants shut down, the better. That's not to say I think the oil industry will go away. Certainly not! We need it as feedstock for the bazillions of materials we use in a modern society. And fertilizer to grow food, let's not forget that. And practically speaking, we're going to be burning the fuels for a while yet.

Electric vehicles are getting more and more common. Don't listen to the nay-sayers saying it won't happen. I remember them saying that putting shoulder belts in cars was unnecessary. That nobody would pay for airbags. That fuel injection was impractical for ordinary vehicles. That cars would never drive themselves. The list goes on.

I would be willing to bet that within the rest of my lifetime, gasoline powered vehicles owned by individuals will not exist and it will be illegal for a human to drive a vehicle in city limits except in case of emergency. Anyone want to take me up on it?

Email ThisBlogThis!Share to TwitterShare to FacebookShare to Pinterest
Labels: Thoughts