I craved a beach

I was channeling my east coast buddies on Sunday. Craving a beach and the smell of the sea. In case you were wondering, there is no sea here. If you came for the waters, you were misinformed.

There are several private lakes, surrounded by expensive homes and guarded by community association employees. If you have buddies, it's possible to be a guest, or you can get in on the practice swims put on by the races.

Then there's Sikome, a public "lake", which I'm pretty sure I could throw a rock across, and I'm a shite pitcher. In years past it was a great place to get a loathsome disease caused by sick kids using it as a toilet.

If you don't mind driving out to Canmore, there's tiny little Quarry Lake, and it's equally tiny beach. Nice water though. Don't argue with the moose or bears that like to visit for a drink. If you 're prepared to freeze your ass off, there's Ghost Lake. Seriously, even in a wetsuit you're going to be cold.

Then there's Glenmore Reservoir. It's a beautiful body of water, no doubt of that, and would reasonably be called a lake if found in nature. It's 3.84 Km2 surface area, and contains 17 million M3 of water. From various places around it you can see the mountains, and downtown, and sometimes both at the same time. However, it's south Calgary's main source of drinking water, and they don't allow swimming. Various forms of non-motorized boating yes, stand-up paddle boarding no, swimming is a big no-no.

Right now the water level is way down in preparation for spring run off. Four years ago we had a huge flood here, and they don't want it to happen again. I went for a walk on what is normally underwater, and channeled being on a beach. Let's just say the experience was less than completely satisfactory, in comparison to Nova Scotia.

It's kind of a pity they don't install a beach there, and charge for admission to cover the costs, even if there is no swimming allowed. There's lots of things to do at a beach that don't involve getting wet.

In any case, here's some photos, showing how deprived I am. How much I miss the two times we rented that beach front cottage in Nova Scotia. 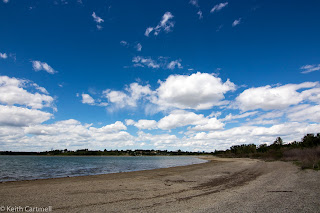 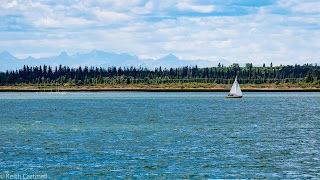 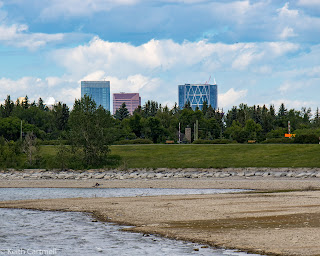 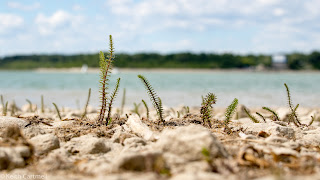 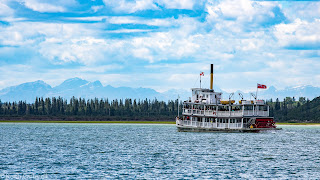 Yes, that really is a paddle boat on the reservoir. It's a replica of the S. S. Moyie. I've never been on it myself.

I had a nice walk for a couple of K on the "beach". It didn't smell quite as nice as the ocean, but it was still a nice watery smell. Afterward I went down to Fish Creek and enjoyed a quiet walk along the river. It's too small to swim, but some people like to splash in it. This is about as big as it ever gets. 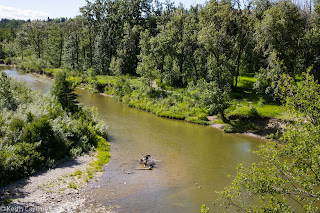