Once upon a time Star Trek was the most amazing thing on TV. I'm talking way back in the day, the one with Shatner, Nimoy, and Kelly. The Enterprise went between the stars at many times the speed of light. There were sensors, tractor beams, phasers, photon torpedoes, and many other staples of science fiction. While never a Trekker, I always looked forward to getting home from school to watch it on a black and white set. There were some spin off books I read and liked.

I watched the first episode of TNG, and wasn't impressed. I'd drifted away from the science fiction community by then and was busy with other stuff. The movies came along at some point, but after I fell asleep during the first one (so disappointed!) I didn't pay much attention. Well, there was the whales one, it was ok at best. There were other spin offs, and I passed over them too, though I did see a bit of Voyager while on vacation. It didn't give me any desire to get the DVD's and work through it. I don't think I'd recognize Deep Space Nine if I saw it without the opening credits.

We were in the library the other day looking through their selection. Let's just say it's eclectic and move on. I found these. (detour because, of course per Saturday's rant, the photos are not on this laptop. Grrr.) 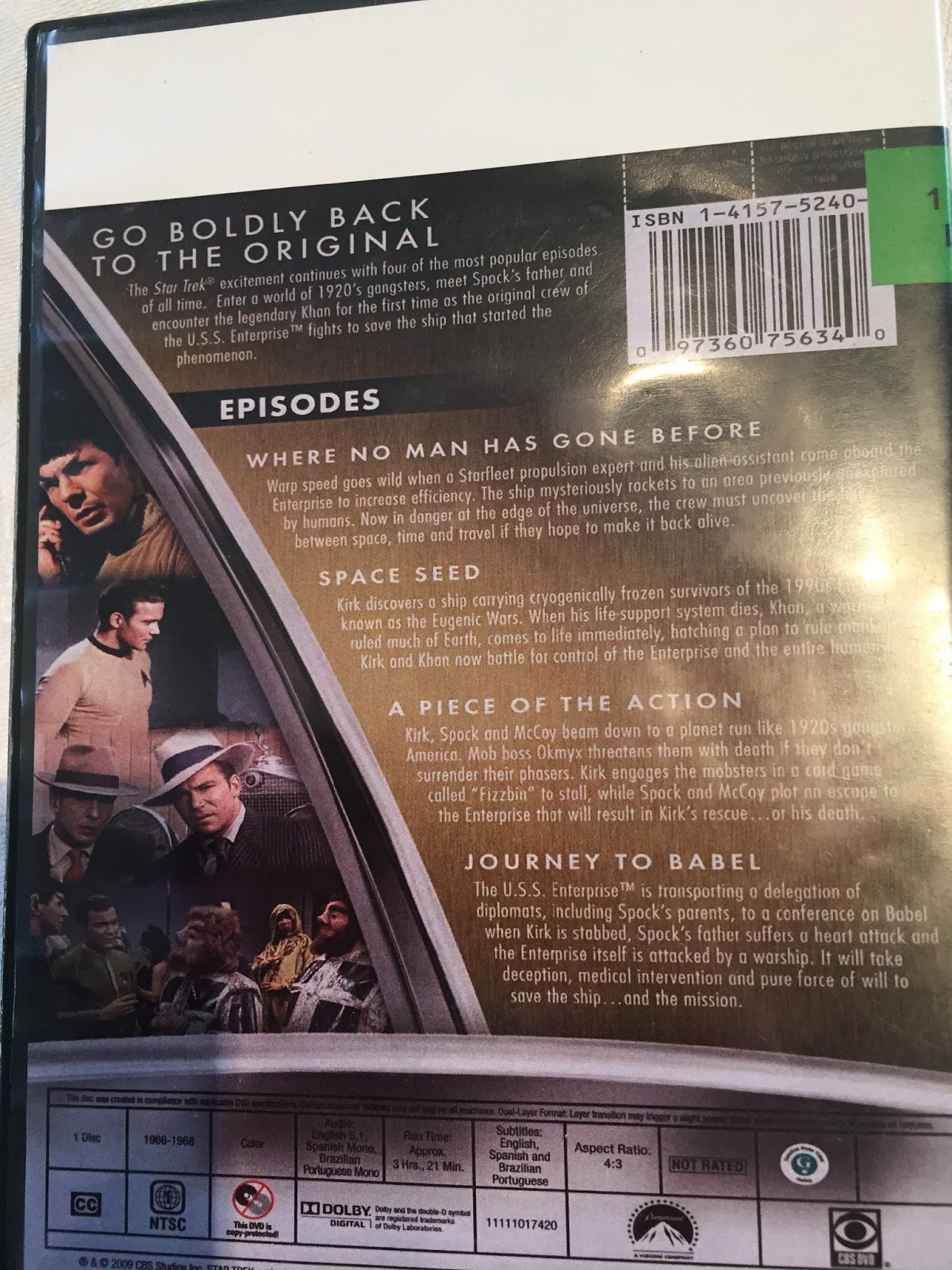 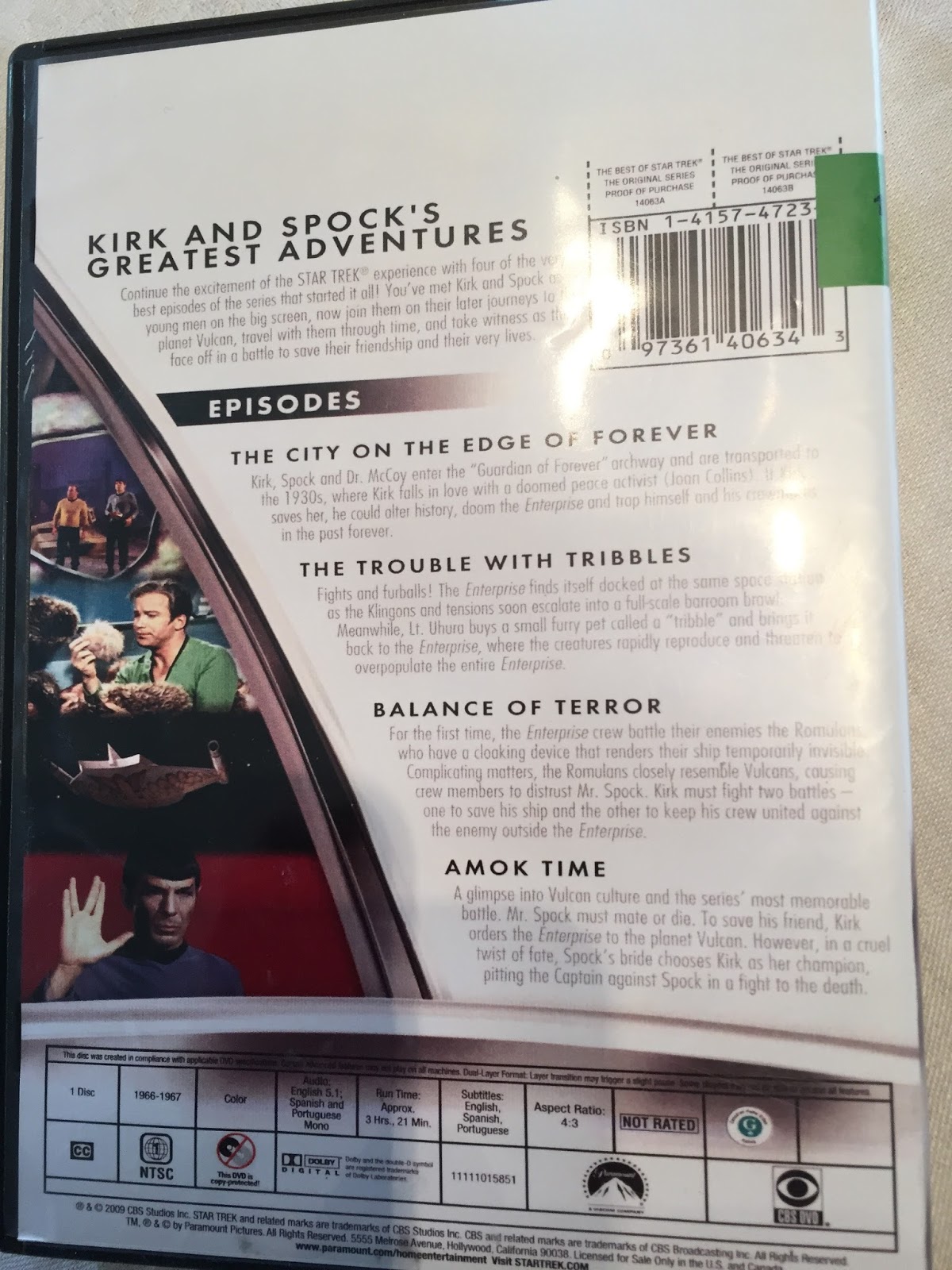 I picked them up without hesitation. It was great watching in colour. In a kind of horrified way I enjoyed watching Kirk strut about. What little we could see of the corridor design made much more sense than the starship in SG-1. But I couldn't get over the buttons! Buttons everywhere! Mechanical buttons that clicked! I'd forgotten how often the control panels blew up, implying the designers had forgotten about fuses. The sliding doors were so cool, and now every supermarket has ones that work better. Why would you only have one way on or off the bridge? And those communicators (A Piece of the Action) looked clunky even in comparison to the rest of the tech around them.

Aside from a warp drive that we don't know how to build, we could make a much more modern looking starship now. There are a bunch of places where the story goes clunk, but part of that is TV show conventions from then. Still, I thoroughly enjoyed myself, drinking wine, inhaling most of a large pizza, and binge watching a show from my childhood.

One of the reasons I was so hungry was being in the water for almost a couple of hours, mainly doing drill. The fun part was watching Michelle put together her best swim to date. For the last part we worked getting her to bend her elbows as she swims. She is looking more and more like a swimmer every time.

Monday was a sleepy day to start, which is really nice. Eventually I was inspired to run by the enthusiasm of the cats. 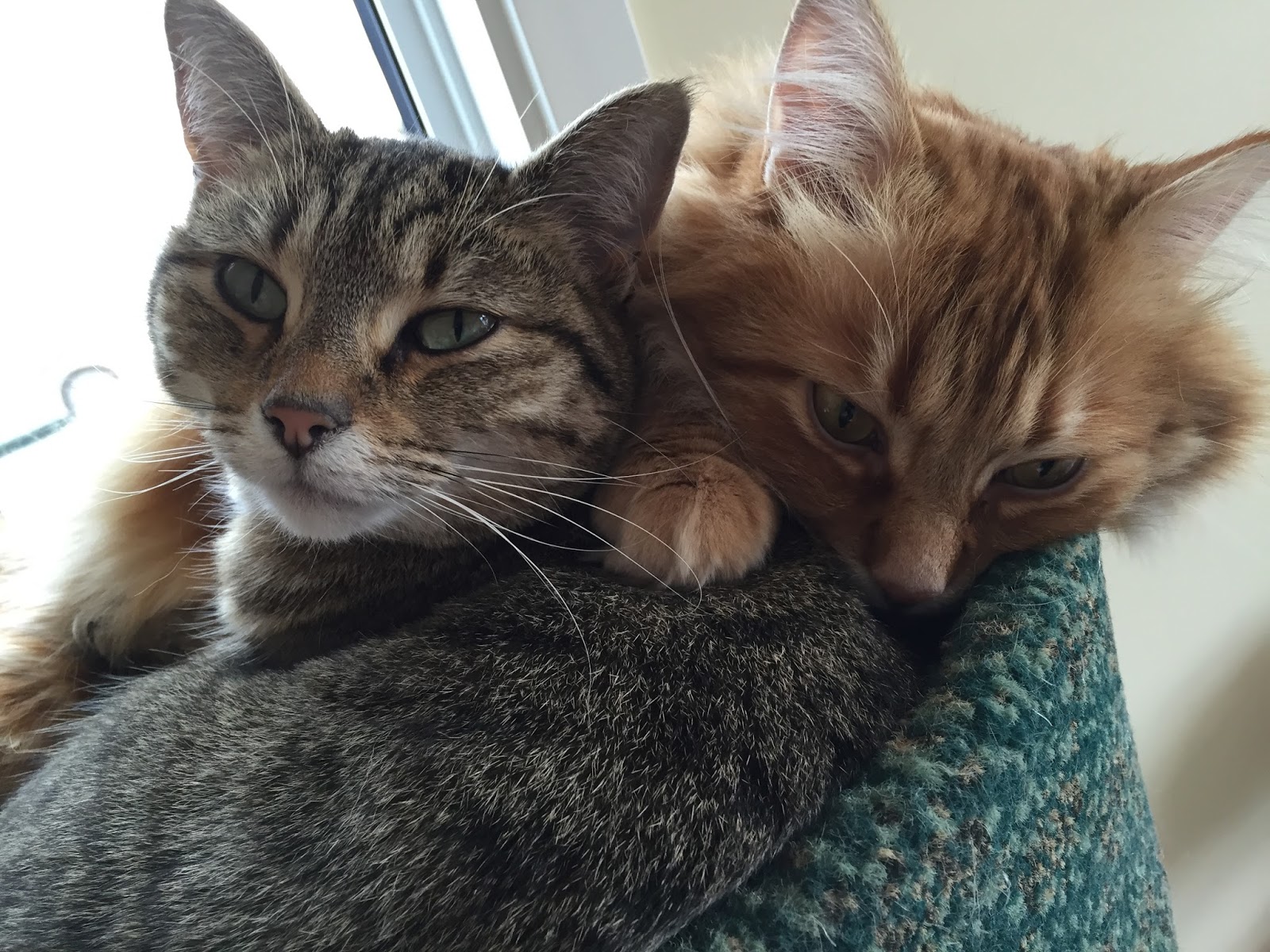 It turned out I guessed right about what to wear for the run. This is a complicated issue here, sometimes. Tights, jacket, gloves, cap and glad of it. There was a stiff wind out on the bike path. I wasn't sure what to expect, but 5K in 36 minutes totally exceeded my expectations. My feet felt light for almost all of it, though oddly enough I wasn't feeling really strong. I chugged along and throughly enjoyed it. There was the slightest niggle in my right hip, but barely noticeable.

When I was running regularly, this would be a so-so run, not too far, not too fast. But in the context of not running regularly since mid-Novemember, I'm really happy with this one. So nice to be out and feeling pretty good. Let's see if my hip is cranky with me in the morning. Here's the run splits. Considering I wasn't trying to run fast at all, this is good. My breathing was just slightly beyond chat chat pace. I'll have to see if my run buddy will put up with me some more, to keep me honest about pace. 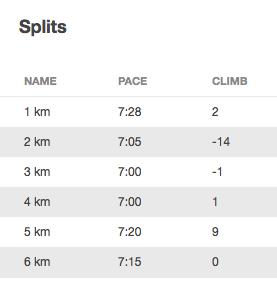 The rest of the day was enjoying an extra day off, and puttering with reorganizing The Bone in the Digester. I thought I had a grip on what needed to be done, but I didn't. I have struggled with this one right from the beginning. Elixer is straightforward, though a couple readers have said there's lots to keep track of. There's a few little bits to add here and there. Bone to Elixir is still very raw, with some scenes I'm not so sure about. It's a bit tricky since it starts where Bone leaves off, and I don't have Bone nailed down yet. It's also the most science fiction-y of the 3, and will be the jumping off point for an entire series, if I get up the energy and imagination.

I think I need to go back to pen and paper and sketch out the story for Bone. I know who dunnit, and how, even why, so it ought to be easy, right? Not so much. Then again, I've been working on this a couple decades, what's a few years more?