Organoleptic again, with an e-rant

A little while ago our book club read The 100 year old man who climbed out the window and disappeared. It was delightful. Last night, completely by accident, we discovered it had been made into a movie. Even better, the move is equally delightful. If you haven't read or watched, do so. Both. Thank me later.

One of the fun things about making wine is the process. It's generally the same for all kits, though there are subtle differences. They would have you believe that you have to follow the instructions exactly to get drinkable wine, and their process is specially tuned to that exact kind of wine. As if.

Consider it as an overall process. Each kit starts with grape juice, some bentonite, and yeast. Later on there are some agents to help settle and stabilize the wine. Some kits have oak dust, oak chips, special yeast nutrient (that I suspect is sugar), whole or crushed raisins, or wine sweeteners or finishers. How much different can the process be? As long as everything gets added in the right order, about the right time, it will all work out. Give the wine time to do it's thing, keep your equipment clean, and all will be well.

Today is the day to transfer a Meglioli Nebbiolo kit from the primary to the carboy. Their kits have all sorts of extra instructions, and I find they are poorly written. Most kit instruction are very clear.

The extra in this case was some dried raisins added at the start. They should be crushed and the juice added back to the wine. This adds to the oranoleptic qualities of the wine. It says so right there in the instructions. 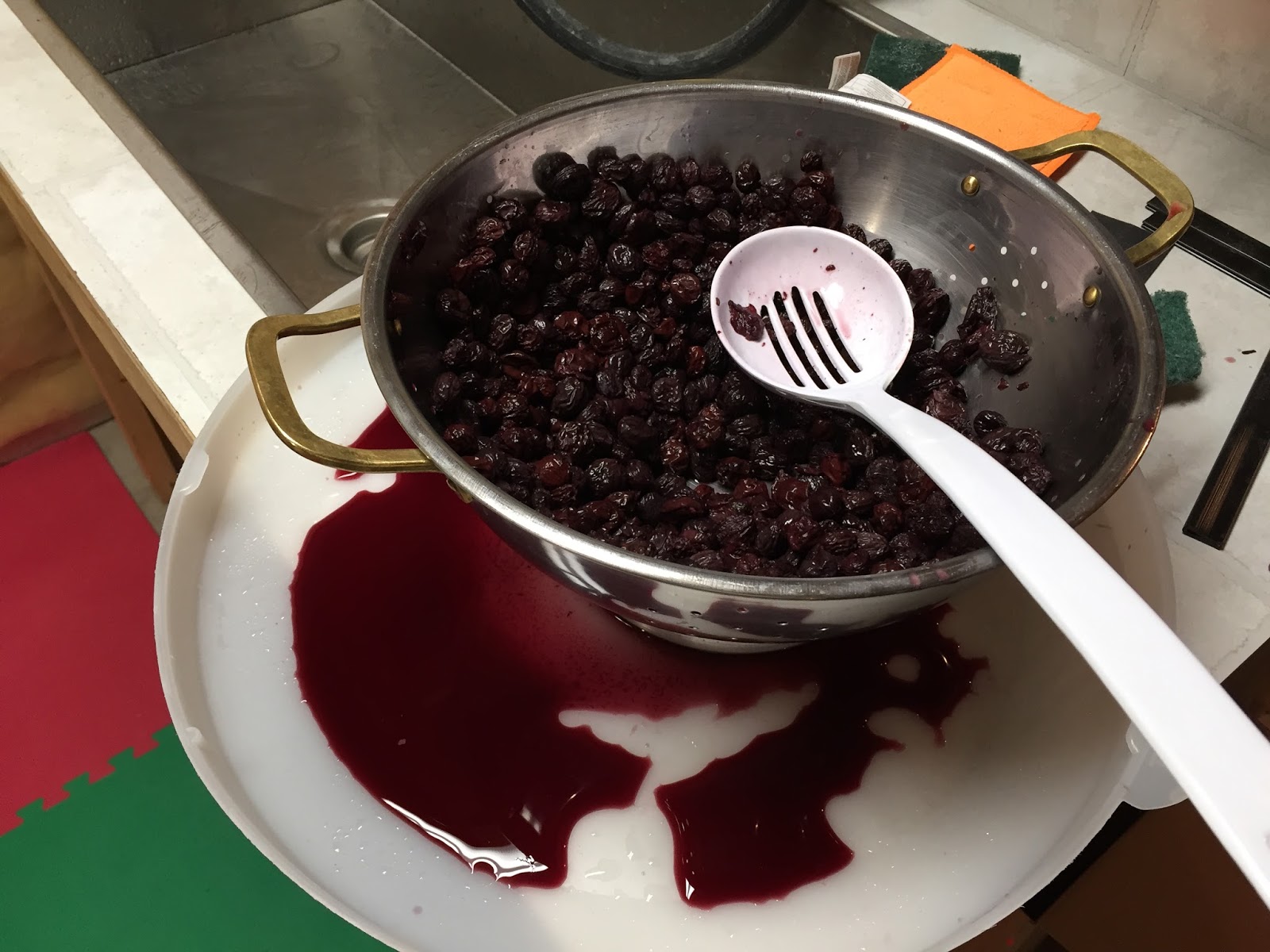 The first few times doing that, many years ago, were a little fraught as I was trying to figure out the best way. Today that all went smoothly. The Brunello started the degassing process. As always, using the right tool makes the job so much easier. 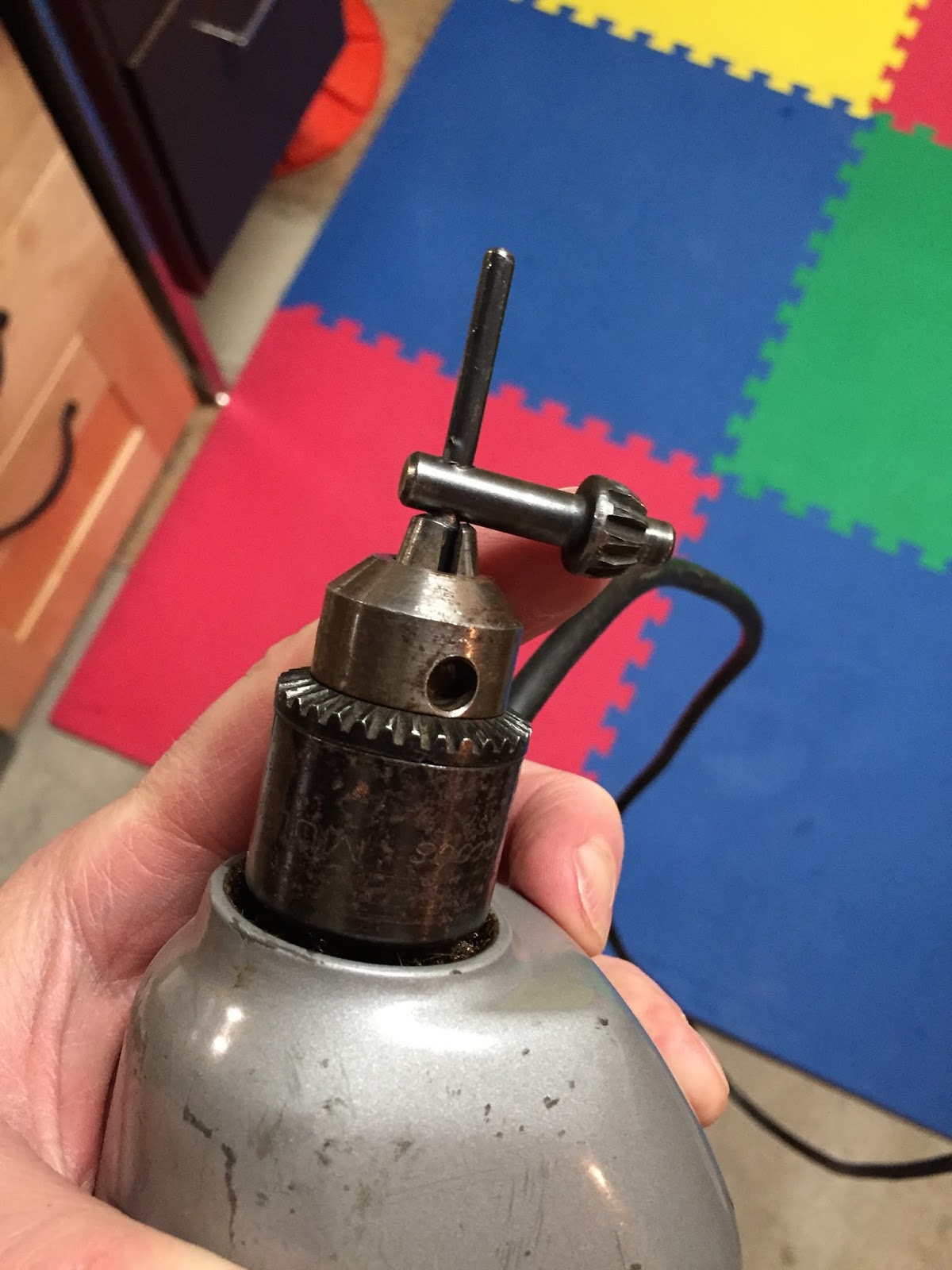 Putting the chuck in the drill itself is a little trick I learned years ago. I once spent the better part of a weekend looking for a chuck, when I knew perfectly well I had three. Somehow three, in spite of only owning one drill.

It's nice out and my hips are feeling pretty good, so I tried a run. That was just over 2 K, feeling heavy all the way. Nothing actually hurt, but it was work. More work than I like, so I called it off. Walked and stretched after, no big clicks.

Settling in for a quiet afternoon puttering about.

Back again after a very frustrating event. I had promised Gerald I'd send him some photos we have of Bernard. They are in my iPhoto. I'd flagged them so they were handy. This was on my laptop. First surprise is that they are not flagged on my desktop where there is email. Second surprise was that I couldn't deal with them as a folder. I didn't like any of their sharing options. After a bunch of floundering around I managed to get a folder of photos on my laptop desktop. From there, eventually after more floundering, onto dropbox. This was all a lot harder than it needed to be. From there I made it public and sent a link. Even that was hard. I had to copy the link to another app, so that I could open another browser window to get at Twitter. At some point we will find out if that actually worked. If I must, now I can email them one at a time. I think. I hope.

I can see why people get so frustrated with computers and related technology. I'd just assumed that iPhoto kept my laptop and desktop folders synchronized along with the photos themselves. Now I need to go and see what organization has been done in various places. I've been meaning to get Photosweeper and do a major clean up on iPhoto, and make sure, again, the photos are backed up in a normal folder.

The problem is that there is a new photo app coming, and I'm terrified. I barely understand iPhoto some days, and this is all cloud related, which I most emphatically do NOT want. I do not want my photos in the cloud. I do not want to be shelling out a few dollars a month for all eternity to keep my photos, and paying cellular rates every time I want to look at one when I'm away from home. I want them on a hard drive I own. Call me old fashioned if you must.

Back in the day when you had to plug in your phone or camera, and iPhoto transferred things, I understood what was going on. Mostly. Things went where they were supposed to go. Mostly. Every month or so I'd plug into the computer and update things. Life was good. Mostly. The advantage was that you knew when it wasn't. Now we walk along, our head in the iCloud, never knowing when we will bump into something, or what to do about it when it happens.

Now, there are days I seriously contemplate life without the whole digital thing. I have to forcibly prevent my devices from updating themselves. My laptop nags me, and it doesn't seem to understand that I LIKE IT THE WAY IT IS NOW!!! I don't want it to change. Change means getting a new, abominable version of iPhoto. Change means having to learn new ways of operating programs or apps, when I've barely mastered the old ways.

I now have zero patience with apps. If they don't work, or I think the interface is stupid, I delete it. I used to like Evernote. The idea is brilliant. The problem is they keep changing it. Every time I want to use it, I have to figure out the interface again, and it isn't easier, it's harder. I haven't deleted it yet, but I've come close.

Back to photos and iPhoto. I take pictures on my iPhone 6. Linda occasionally tries to take photos on the old 4, and adventures happen. Rarely, I take pictures with the iPad, but I will occasionally dress up photos using Snapseed on the iPad. The saved photos go into the camera roll, and are supposed to go into my photo stream. Mostly they do, except for the one that I want to use in my blog, which I write on my laptop. Then I'm trying to force it to update. Or I'll save the blog, check the desktop, if Linda's not on it, see that the photo I want is there, and finish the blog. Such a pain the behind. The only way I know of to force photo stream to update is to turn it off, then turn it back on again, and wait while it refreshes the last 1000 photos, or whatever it does. I will admit to not fully understanding it.

One of the things that bugs me is that the file numbers are starting to overlap. Why can't we tell our devices to use a particular numbering system for photos? A file name like KCIP6_20150205_0001.jpg is perfectly nice but there are others. It should be a configurable setting.

Once upon a time I could pick something up and know how to use it in a few seconds of playing with it. That time is long past. I once stared in baffled anger at an "updated" phone bill I could no longer understand. They had stopped listing the date, time, phone number, and cost of each call. There are days I love and loathe my various electronic devices. I have much more sympathy with people who ask their children or grandchildren to explain "the google" once more.

Don't even get me started on damnyouautocorrect. Just don't.

I know you've had e-adventures, and probably recently. Feel free to vent in comments.