I don't get a lot of spam comments. Maybe that's tempting fate, but since they are all moderated out I don't mind. Blogger hasn't made a mistake in a long time, and dealing with spam hasn't been a chore at all. I hope you don't mind it might take a few hours to have your brilliant comment displayed to the world. Have I ever said how much I like to get comments?

Most of the spam is pretty inane, but this one amused me. I tried to copy paste it, but that didn't work, and I wasn't so amused I wanted to retype it. I can't tell if this is someone running another language through a machine translator, or if it's a computer set to work to composing the spam from scratch. There's a certain artfulness about the use of the language.

This might actually become the slogan of my blog, "You managed to hit the nail upon the head and defined out the whole thing with no need side effect."

In Acadia pool this morning. Still murky. I don't know if this done special for the morning swimmers, or in preparation for all the kids coming in after we leave. I am suspicious of small kids in the pool. There was one time swimming in Weyburn that comes to mind. I'm sure that you'll know exactly where that is if I say about half way between Moose Jaw and Estevan. Yeah. The water there was not just murky, but murky green. A huge number of kids got out just before I got in. It was much too warm. I showered very, very thoroughly afterward, both at the pool and my motel room.

But today was good. Very good. I had received some tips from a swim buddy and worked really hard in trying them out. My arms behave now, almost all the time. I think that right arm getting off the reservation was just laziness. Today I was thinking of scratching my ears with my thumb as I was recovering. It also seems to lead to a cleaner entry and a better catch. Much better rhythm and better roll.

The other thing was kicking a bit better. My kick sucks. More laziness. There were several times when I was swimming faster than expected, with less effort from my arms, and the water feeling a bit different on catch. So far so good. I was a bit shorter of breath, but that shouldn't be a surprise.

The breathing out throughout the strokes is a bit harder for me. I'm not sure how much of a difference it made. Normally problem solving theory is that you change only one thing at a time. That way when it works, you know what fixed it. Mostly.

But today I was changing several things at once as I merrily passed everyone swimming in the two center lanes. The one woman was there again, polite as ever about letting me by. A couple other people were less than polite and had to be passed. We were doing up the rope and down the middle, and some people seemed to lose track of which lane they were swimming in. One guy was doing a sort of figure 8 pattern near as I could tell.

None the less, my inner shark was totally enjoying it. One girl in the next lane pushed off as I did, and headed up the pool flat out. I passed her, nice and relaxed. One guy (I think he's the usual big dog of the pool at that time of the day) was going all out trying to keep ahead. My inner shark basked in the draft, then we got tired of it and blew past him. He didn't get the message though, and the next time I caught him I had to do the same thing all over.

So much fun doing some sighting and defending my space from people that don't swim a straight line, even when looking at the lines on the pool bottom. The water wasn't THAT murky. The downside of changing a bunch of things at once is that I don't know which thing has the biggest impact, or none at all. Oh well. I'm swimming faster and you've gotta love that.

Coffee after was one of the best conversations I've had in a long time.

After all that activity, what do I see when I get home? They didn't even notice. Such is the life of being cat staff. 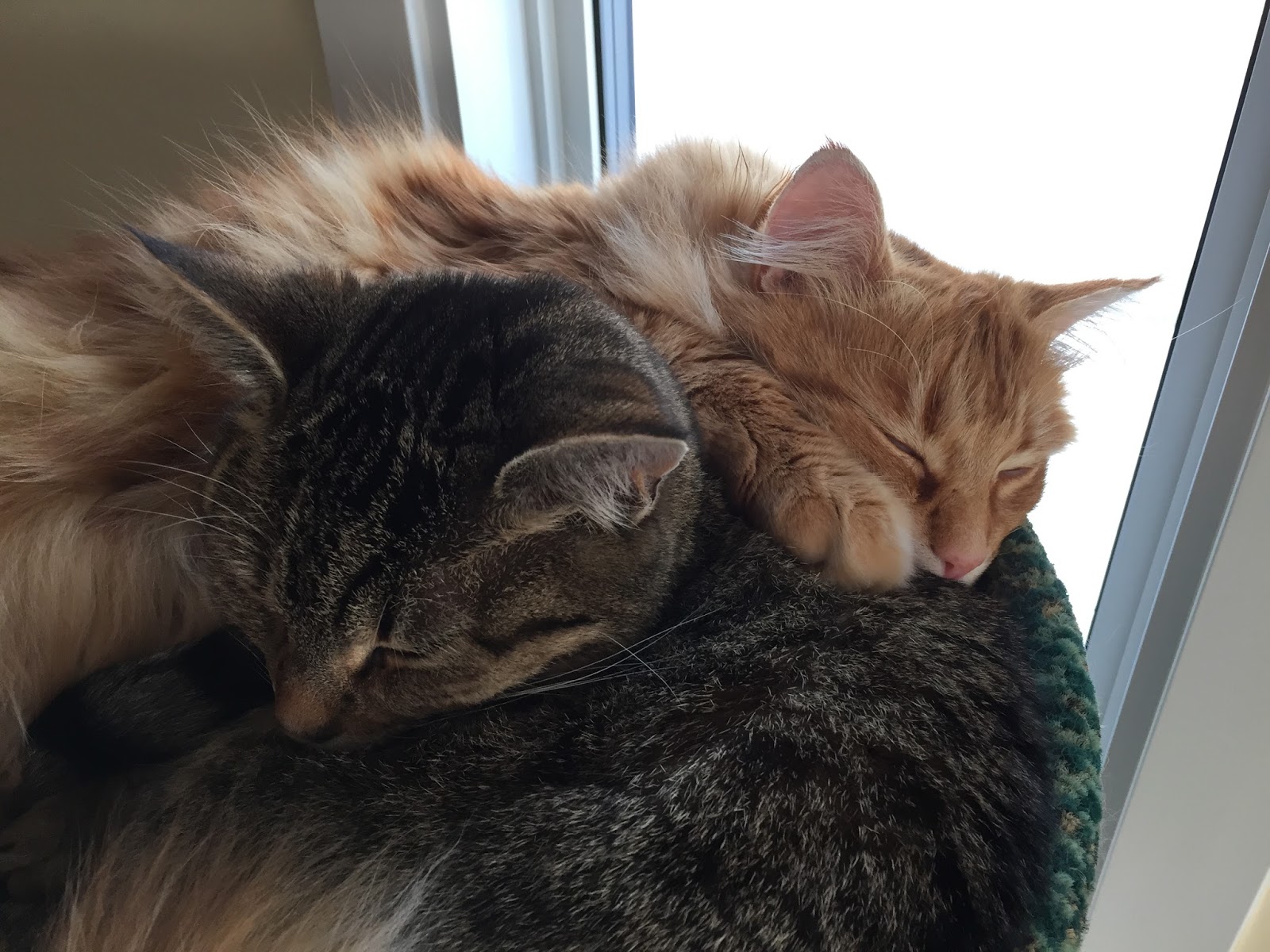