Some of you may have noticed that I'm partial to big orange kitties. First was Sebastian, before even we bought this house. He lived a good long time. There are no digital photos of him, but picture a very big, muscular, dignified orange cat, and you'll have the right idea. He was an in and out cat and bossed the local neighborhood. I once watched him run off a german shepard dog. No histrionics, he just got up and trotted towards the dog, totally, "time to go beat up a dog, ho hum". The dog turned and ran.

I still miss him.

We got Amelia to keep Nefertitti company after Sebastian passed on. Then it was Nefer's turn and Amelia was alone. We though she wanted company when we saw her meowing at a cat outside in what seemed to be a friendly lonely way. 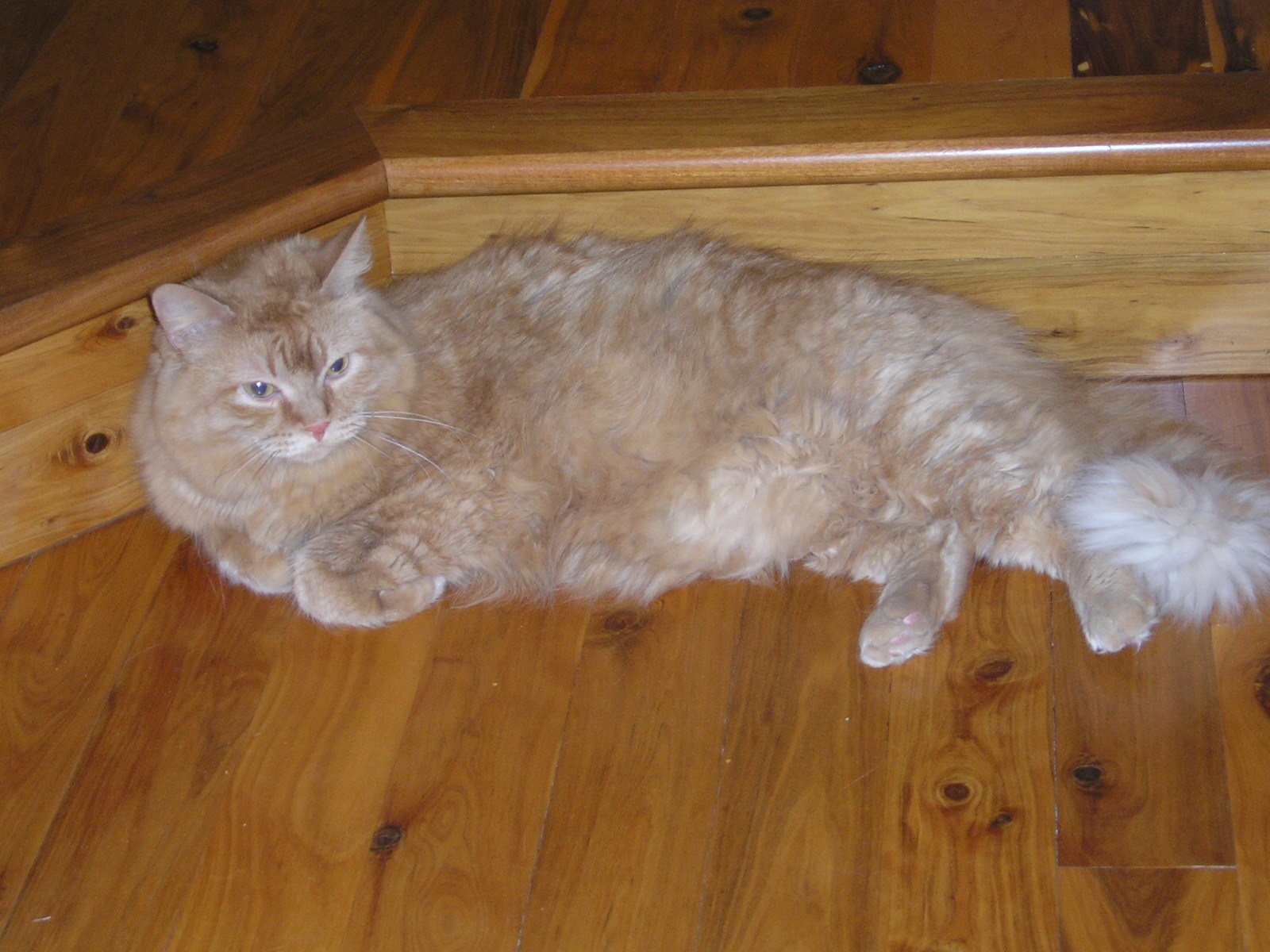 Unfortunately he and Amelia didn't get along. It started a bit rocky, which is not unexpected. Then it got a bit better for a while, then started going downhill. Bernard turned into a bit of a bully where Amelia was concerned. She was generally a very amiable sweet kitty, and just couldn't cope. She was never the same after.

For a while we were keeping them separate, one upstairs, one in the basement, alternating. The changeover was fraught. We hoped they would learn to get along.

Then one day we were having friends over for dinner. Friends that were mildly allergic to cats, but they assured us that without carpet they would be fine for an evening.

Linda got home first and phoned me in horror. Somehow the basement door had got opened, and the two had fought. All over the house. There was a bit of orange fur here and there, but mostly it was black and white fur, along with blood, dribbles of urine, and even a bit of poop.

I left work early and we worked like dogs to clean up the house and the cats. The dinner was fine, and our guests didn't mind, but it was the last straw. We started looking for a new home for Bernard. There was lots of discussion leading up to that.

Enter my buddy Gerald. He had mused about looking for a cat. We got the two of them together, and Gerald did a very credible interview with Bernard. We sent them off together. What was annoying about the whole affair after the fact, is that Gerald got a room mate, who had a cat, and those two cats got along fine. We visited Gerald periodically, and it was always nice to see Bernard again. I'd like to think he remembered me, but you never know.

Big orange cats are prone to kidney disease, and that's how this story ended tonight. Gerald took him to the vet mid last week, and he never came home again. The lab tests said there wasn't much they could do. The fluid was building up in his lungs and he would start to choke. I went to visit to say goodbye to an old friend and give Gerald some company.

Bernard would have been about 16 or so. Up till last week he was his normal self, and I wish I could have seen him once more like that. But we don't know. All we can do is enjoy them will we have them, and do that final favour when the time comes.