That was not as much fun as I had hoped it would be. The plan was to ride 6 hours, run for half an hour. I picked Highwood Pass because I've been wanting to do it for a while. I've never been out that way.

Saturday was spent taming the lawn jungle, bottling another wine kit that I think is going to be a real winner, and getting ready for the ride. Six hours is about the furthest I can go on an unsupported ride and I was thinking that if the hills are tough I might run out. My thinking was to park the car somewhere so that I do an out and back to the top of the pass and then I can refuel if necessary or at least top up on water. Then ride for however much longer was needed, whether it's back up the pass or toward Longview.

The day started nice enough. Here's the view from Longview to the west. Can't really see the mountains, but they're there. This is serious ranching country. 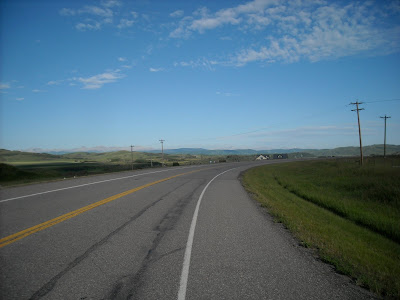 I reset the car odometer at Longview. 24.2 K to the Highwood River Inn, flat as a pancake. 44 K to the park gates where they shut the road for the winter, still pretty flat but some hills. 82 K to the summit of the pass, with some serious hill. What's special about the Pass? It's the highest elevation you can get to in Canada via a paved road. Here's an elevation profile and some info about biking it. And this bit, saying the final climb to the summit is Category 1 on the Tour de France. I feel much better now about how slow I was.

On the way back down I figured I'd park at the gates, but it turns out there's a bit of gravel road and a really, really crappy Texas gate so I drove a little further along and found a nice spot just off the side of the road. There were still signs - No motorized vehicles past this point, and, Notice to Anglers.

I got ready and started riding. What else was there to do? Right from the start I wasn't terribly comfortable and settled on my bike. My left hand was going numb quickly. I found it really hard to get into a groove. It felt like I was pedaling in molassas. At my first pee break I even checked to make sure my brakes weren't rubbing or anything else. Just me, not at the top of my spin game. Not even close.

Still, the scenery is pretty good. And hardly any cars! Maybe a dozen passed me. Lots of motor bikes though, including one that scared the crap out of me because it was so quiet. 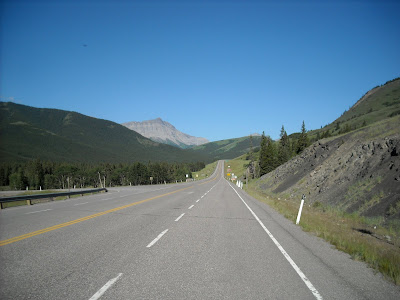 At the start of the ride it was sunny and warm. After about an hour it started to cloud over. It was nice to ride in the shade and cool. As I got closer to the summit it seriously clouded over, and there were some rain spatters. About 5 K from the summit it started actually raining lightly. I'm pushing through, determined to get to the top. The last bit is hard, several K of what they say is 7% grade. I got to within sight of the summit sign. That also put me  within sight of a wall of rain. I weenied out, turned, and pedaled up to about 70Kph, hoping to get out of the rain soon. This is what the summit looked like in the morning. 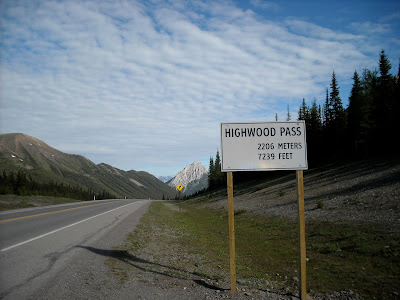 I had to slow to dodge a pair of scruffy mountain goats on the road. That and a zillion fat gophers were the only wild life I saw while on my bike. I'm very glad I was in the car when I saw the grizzly bear. It was just standing there on the shoulder of the road, watching me pass. I moved right over and gave it lots of room. It was a beautiful cinnamon colour, and it was huge!! I was glad it looked fat and in good health, so it didn't feel any pressing need to rip into a car to eat the driver. Once I drove past it padded across the road. Holy crap. That's the first time I've seen one that close. I did not want to annoy it by stopping long enough to turn the camera on and take his picture. Maybe he's a recluse and doesn't want his picture taken, and that would be enough to persuade him that a midmorning snack isn't such a bad thing after all.

The ride down was miserable. It rained 3 times more. Once there was some hail in it, which hurts at 60+ Kph. I was looking for shelter. Not. The wind started getting gusty. I started getting nervous. From the gates to where I turned around at the top was 2:25 or so. I got back to the car about 3:45. Only 80 K total ride, and I was knackered. There was no question of carrying on. I was on track for nutrition, but I've learned to respect Alberta weather. I bailed. Here's what it looked like. 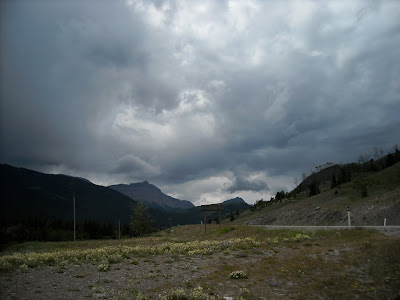 I still did the brick since that wouldn't get me too far from the car, and even then the wind was pushing me around. The run felt pretty good even though it wasn't fast either.

Would I do it again? Good question. I'm not sure. Weather is a huge factor on this ride and can quickly turn a nice ride into a miserable one. Plus it's a bit nervous making to be so far from emergency pickup in an area with no cell phone coverage.

I've got another long ride next Sunday, and I'm thinking about riding down to Black Diamond, then across to Okotoks, south, then west to Hartley, (maybe a detour down to Longview) back to Black Diamond and home. This has the advantage of being in cell coverage the whole way and a gas station in Black Diamond for water or snacks. This will be about 160 k or so, and if I remember my schedule it's supposed to be a 7 hour easy ride. Anybody wanting in can email me.