So many titles to choose from

The day started well with a good swim. Warmed up, and could feel my grip on the water. My roll was better and stroke better coordinated, and it seemed I was moving faster with less effort. Did some drill, then 2 sets of 5 x 100. Most of these were 105 to 110 seconds. I think one was right on 100, but I was having trouble focussing on my watch. It felt really fast. The last one was a hair over 110, like, 111.5. I blame tired arms being slow to get both hands together to click the button on the watch. Did some golf drill throughout, and oddly enough, this was total shite. Yet my 100's felt strong, and I wasn't out of breath at the end. Was it Julie who said "if you don't think for a second you need a bucket at the end of the interval, you aren't going hard enough!" Did some more drill and cool down.

During cool down I stopped to let the other guy go by, since he was catching up. We both stopped a little while later, and laughed when he told me was just catching up to practice drafting! Serves me right for being polite!

This was a good strong swim, the first time I've maxed out my speed and effort since before I was sick. It felt really good. 1 hour in the pool, and another .25 hr doing core work in the dive tank.

The plan was to come home, take a quick look at email, and zoom out of for my run. The weather looked like it was closing in. The best laid plans.... Work had a few things for me, and one of the files I rely on has been eaten by my computer. It was fine yesterday. And of course, what I needed it for had been done since the last backup. Sigh. I had to recreate it, which is more of a pain than particularly difficult.

Here's the weather forecast I read just before going out. 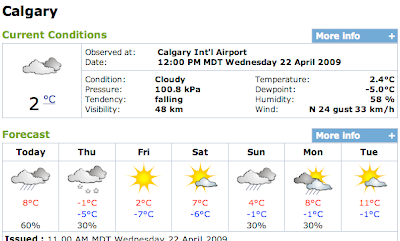 Almost by accident, I put on my jacket, thinking it might rain, and in any case it was really windy. Well, I got lucky there. Ten minutes into my run it started snowing. At first it was just a few flakes. Then it got much worse. By the time I got back there was about a cm of snow on the ground, and you couldn't read signs that faced north. Not cold, particularly, maybe just 0 C. But I was sure wet when I got home.

The run went really well. IG is pushing the run a bit, and I have to say I'm running faster and further than I ever believed possible so soon this year. Last year this time running 7.5 Kph was doing good. I think I've made a bit of a step change in the last few weeks. Now I'm up to about 9 Kph. Today I walked and jogged to Anderson and 37 st path, then ran 15/1 all the way to the top of the Weaselhead hill in North Glenmore park. I ran UP the hill! The first interval I probably pushed a little too hard, going right to the top of my aerobic zone, but I was pushing into a strong headwind. The rest of them I settled down to a slightly slower pace. I began to get a bit tired on the way back, and the last interval was a bit of a struggle. I ended up being about 600 m short of my starting point when I reached 96 minutes. Jogged that very easy, then walked home.

I promptly devoured a banana slathered in peanut butter and Nutella, with a glass of milk on the side. Put my feet up against the wall for 15 min. They were a bit sore and tired. Showered, and feet up some more. Later I'm going to do this still more and I promised my feet some time in the foot fixer and more stretching. I am thinking that I really should take along some nutrition on anything over about 1:20, maybe a Gu or something.

There's one spot on the pathway we'll be on for the Police Half Marathon, just past the little bridge at the bottom of the hill coming down out of South Glenmore park, that still has some ice on the path for a few yards. The centre is bare, and there's no problem with runners in single file. The ice on either side of that looks pretty slippery.