Even the stud-liest of you gardeners never thought to

use a carpentry hand saw and a pair of vice grips as gardening tools.

Today was an adventure I've been dreading for some time. It's getting to be yard clean up time here in Calgary. My neighbour is retired, and his lawn and gardens are immaculate. We feel very inadequate, since lately we don't pay much attention to the lawn. I mow it once in a while. I never water it, or put fertilizer on it, because then I'd have to mow it more. Mowing comes out of training time. Periodically I'll try to repress the dandylions.

Every spring I trim back a mint plant. It isn't much of a problem as long as you aren't in a rush. Normally I get it when it's already started to sprout, and I'm too much of a weenie to trim back living growth. So the ball of dead stalks has grown and grown. Linda advised cutting it back to ground level while the cutting was good. This is what it looks like after the easy trim, and the ball that remains. You can see the mound of branches I've already trimmed off. 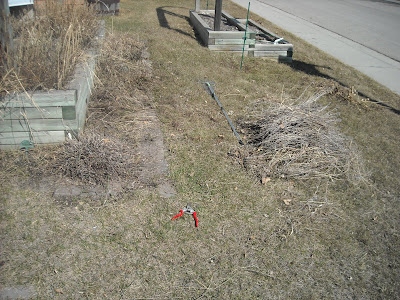 This is after I took the handsaw to it. I only used it because I didn't have a chainsaw. 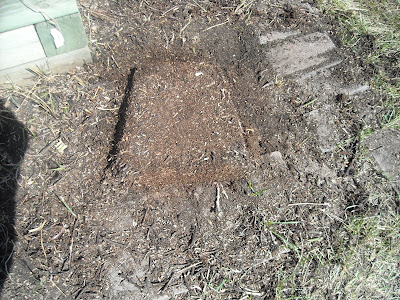 Next up was the rose bush. The wild Alberta Rose that self seeded. We never put it there. An Alberta Rose isn't some namby pamby pampered nancy-boy of a tea rose that needs tender loving care to make it through the winter. These things can take anything an Alberta winter can throw at them for climate, and the thorns can deal with anything else. See what I mean? 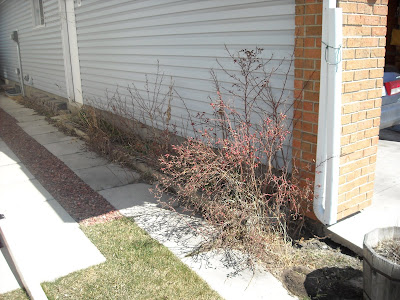 Here's a close up of the thorns and tangled mess. 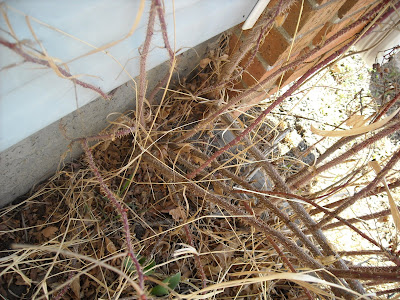 What complicated matters is that there is some other stuff growing there that Linda didn't want removed. Normally, I'm pretty much from the thermo-nuclear school of gardening. Rip it all out and start over. Here's the vise grips at work, trying to get a grip on a thorny bit. 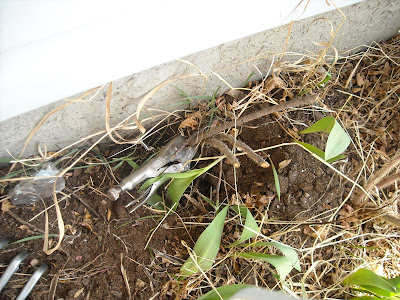 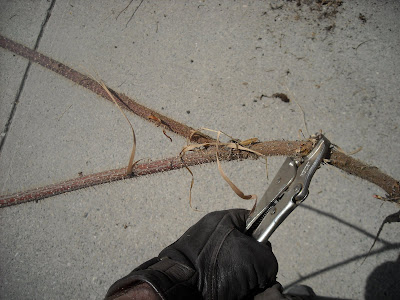 And yes, I conquered! Who could doubt it, with the studly use of vise grips, and other tools? And better yet, no blood was spilt. No triathletes were killed or damaged in the making of this afternoon. 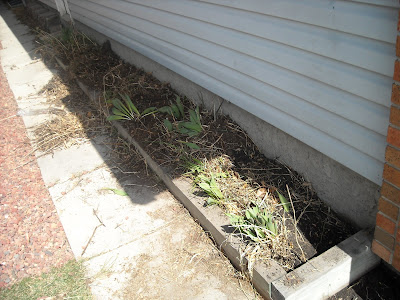 Here's the mound of what was left, after uprooting and before chipper shredding. I admit the chipper isn't quite as macho as it could be, since it isn't gas powered, an only takes stuff up to an inch or two in diameter. 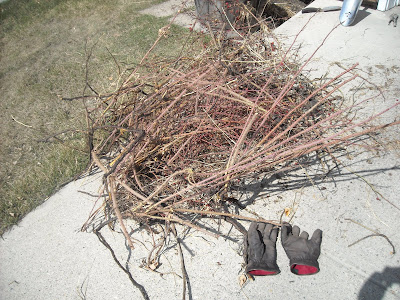 Technically, today is a rest day. I wonder if wrestling with such a tough plant counts as a workout?