The birth of a Spanish Tempranillo, or

The Road to Nepal Kicked my Ass.

Another swim this morning, but not quite the zoo it was yesterday. Today the 3 guys that swim faster than me all showed up and took over one of the fast lanes. There were two slower swimmers in the other fast lane. I actually stood there and timed the fast guys to see if I would fit in. Not.

Got started in the other lane, and was happy to find the other people were very considerate. I did a bit of warmup, some drill, then settled into an easy 1 K in 19:35. Worked on kicking more, or kicking harder, whatever. Did some more drill, including some golf. I'm down to 81 again, which is about where I normally was before I was sick. Did some core work. 1 hr in total.

Home, and started on the next wine kit. I thought I'd follow this process from opening the box, to bottling it. Those who think I've defiled the purity of a blog that's mostly about triathlete stuff can send their complaints to keith@bitemybutt.com.

This is what the box looks like when you open it. You can see what is going to be a white wine in the carboy in the background. Looks pretty murky now, but it will clear. 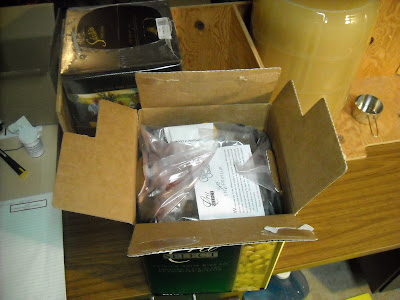 This what you get when you spread out all the little packets of stuff. 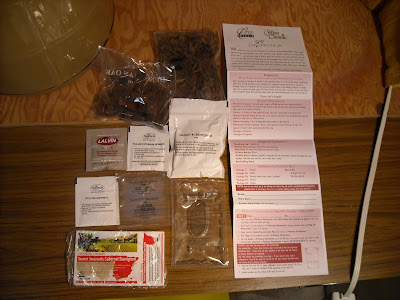 Letting the bag of juice warm up a little, since the basement is cool. It wants to be 20 C or so before adding the yeast. 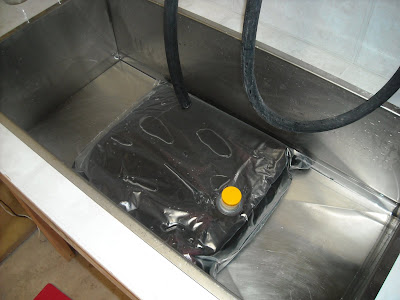 Mixing up the Bentonite. 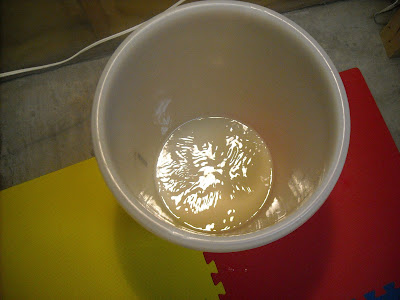 The special tool you need to get the cap off the wine bag. It's on there good. There are other ways, but this is easiest. 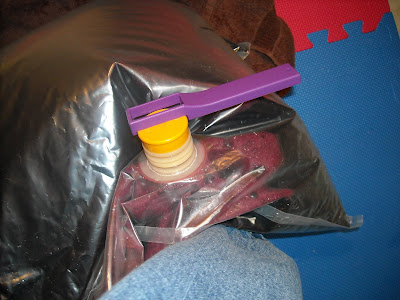 Once you pour out the juice, there's still some left. You paid good $ for it, so you want it all. 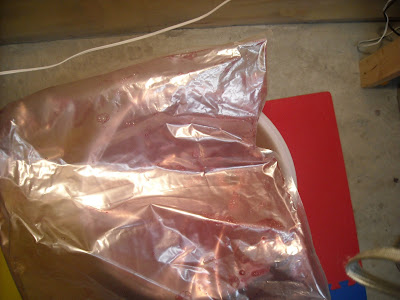 The solution is to add a bit more water and swish it around a little and add that to the primary. 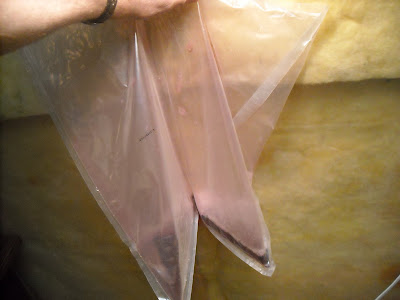 Some kits come with extras. This is some oak chips to make up for this wine not sitting in an oak barrel to age. 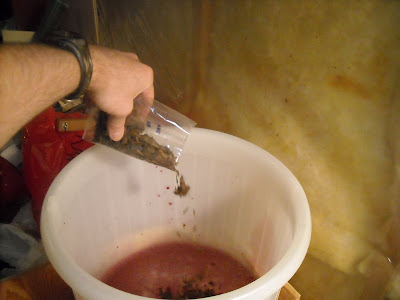 Top it up with water. Filtered water, not tap water. Tap water has chlorine in it, which inhibits the yeast growth and leaves a funny taste. Trade secret here, fill to the top of the 5, not where the line is. Stir. 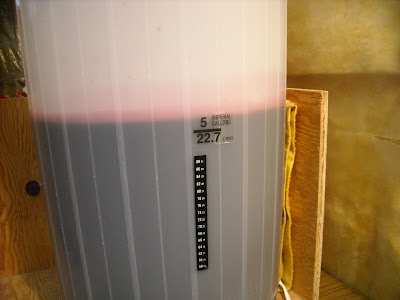 Last, you add the yeast. This is what it looks like. The foam settles and the yeast starts eating the sugar in the juice to produce alcohol. I'll keep the temperature between 20 and 24 C for the next 5 or six days. 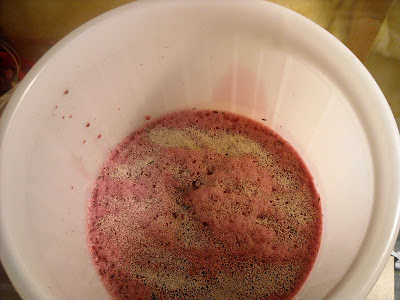 One of my favourite rides is called the Road to Nepal. Follow this link to see a map and elevation from a blog post a little more than a year ago. One day I'll have to get some photos.

There were two lessons today.
I learned I didn't work out hard enough on the spin trainer this winter.
I re-learned what a tough ride this is.

The Environment Canada website said it was 4 C when I left, and 8 C when I got back. (39 F and 46 F, respectively, for the metrically challenged.) I think it was a bit warmer than that, but it was hard to tell because of the gusty winds. I figure 15 to 20 Kph. It's clear and sunny, and warm if you're out of the wind. I thought it would warm up more on the ride than it did, so I was a bit cold throughout. Should have worn another pair of socks, and maybe a vest with arm warmers. The long sleeve tech shirt and wind jacket weren't quite warm enough. I also wore gloves and tights over bike shorts.

The jacket flaps a lot more in the wind this year than it did last year. Other times I'd take that as a compliment, but it was annoying today. I wanted to try to spin up the hills as much as possible. As I said earlier, they are bigger and longer than I remember. I was kind of tired coming back.

The ride was nice, but long. I was happy to be back home again. Here's some numbers.
2:27 ride time
51.2 Km trip distance (There's probably a slight difference between bike computer calibration.)
20.8 kph average
73.2 k max speed (Too chicken to go faster with the wind and flappy jacket.)

After my bike, I spent a lot of time looking at this. My massage therapist tells me this is an excellent thing to do after a workout, particularly running or biking. It help drains out your legs. I spent probably 20 min or so looking at the ceiling and relaxing. Did some other stretching as well. 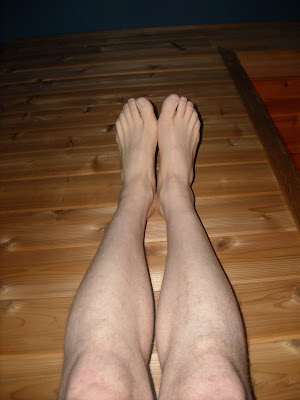 And now the day is mine, mine, MINE! (muhahahahahaha)

I'm ready for a nap.