With yesterday being crappy weather, I think all the people that missed their swim showed up this morning. It was a total zoo. I didn't even try to get into a lane. There was 3 lanes, with 3 people in each, with a perfectly imperfect mix of fast, medium and slow. It begs for organization. I went into the dive tank, and kept an eye on the pool. Normally, shortly after 7, things calm down. Not today.

After a bit, I slipped into a lane with another girl that swims about the same speed, and life was good with just the two of us. Then this ditz plopped into the lane. Didn't even look, just started swimming. Very slowly. Very, very slowly. I chatted to same speed girl during the interval breaks. Both of us are touching her toes and lapping her, quickly, and she didn't get the message that maybe, just maybe, she was in the wrong lane. Eventually, when we were almost done, she moved into the next lane. With a girl that was swimming the same speed as us. The other guy noticed we were leaving when done, and slid into our lane. He caught our eyes, gestured at the slow one, and rolled his eyes.

The actual workout was a warm up, and a short session of drill. Then 5 x 250 m, essentially on the 5 min. Took 30 seconds rest each time. Cooled down. 45 min. Did core work and stretching in the dive tank before and after the swim for another 15 min at least, and probably more.

The run today was really good. I was planning to redo the route I did last week, and take some photos. Well, there was a hitch there, but I still got photos. Here's the map of where I went. 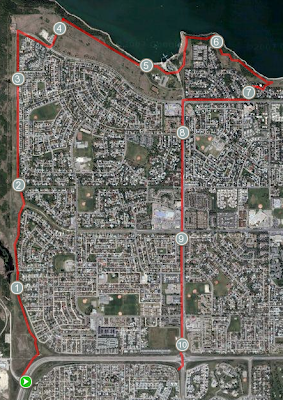 Walked out to where the pathway starts at Anderson and 37. This is what it looks like. The first one is a view of the mountains, and the second shows the traffic lights where I started my run. 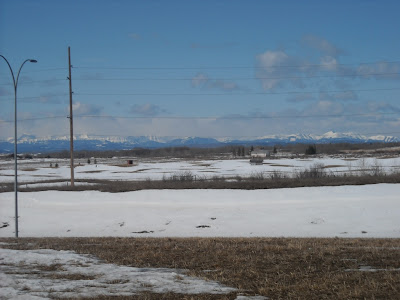 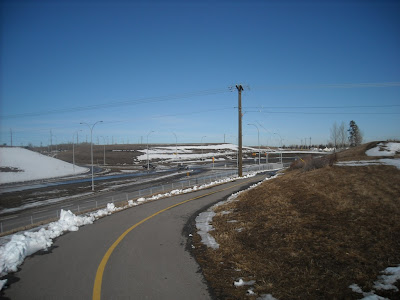 My thought today was to run easy, being careful of footing. There's some icy patches on the paths. I remember Kelly saying she wanted to follow the path I showed in a photo a while ago. That goes south. I'll get pics of them when the ice on the path melts. This is going north. Here's a series of photos showing the path. 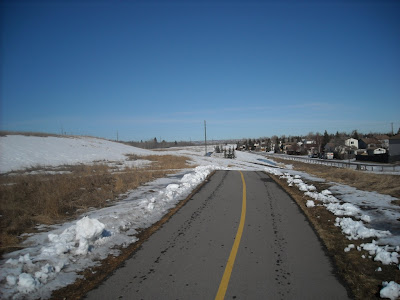 The space off to the left is a huge off-leash dog run area. 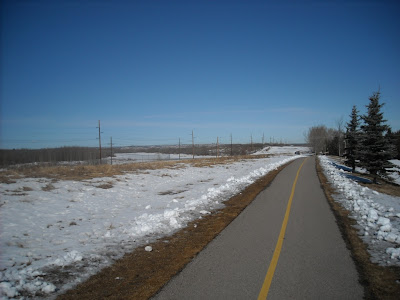 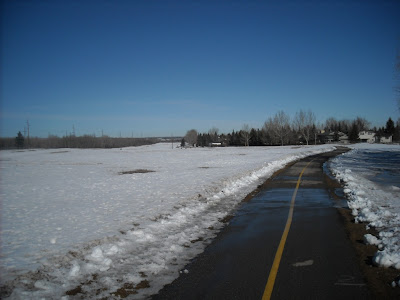 This is just one of the puddles. I think I get extra points for the run, having to leap over the smaller puddles, run on snow and ice drifts, and stride carefully on ice. 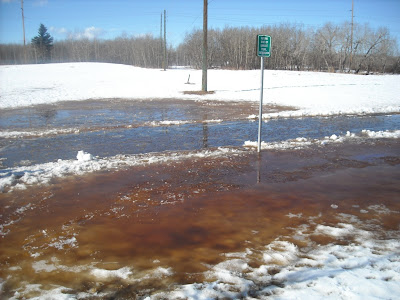 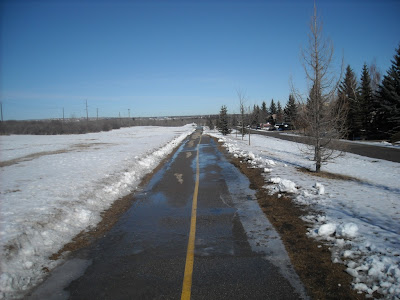 I was surprised to find the path I wanted to go on to get to Glenmore closed. They were doing something with Osprey nests. I thought it was a really pretty helicopter. 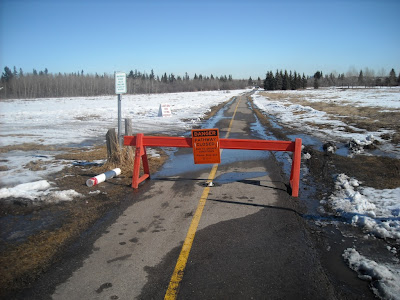 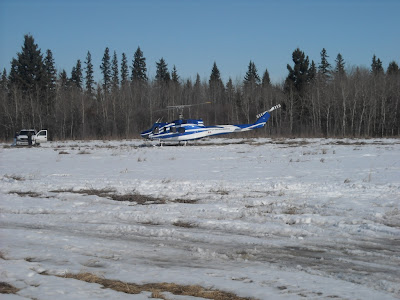 I took an alternative route to get to the pathway around the reservoir. Here's some views of the reservoir, and across it, you can see some of the taller buildings downtown. 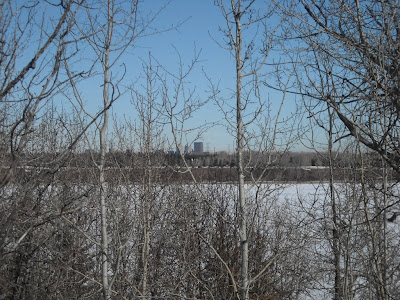 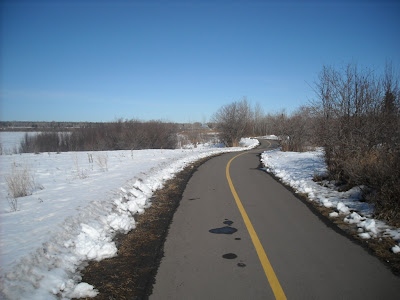 From the map you can see where there is a point of land jutting into the reservoir. From there, you get a great view of the mountains across the reservoir. 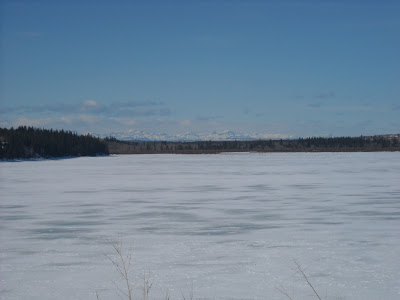 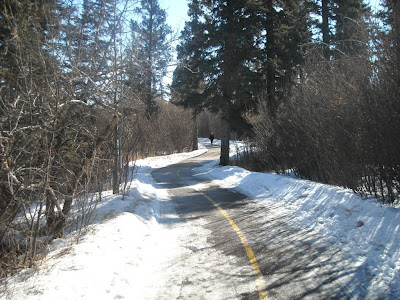 This is where I turned around last week. You can see I'm a bit slower here. In the background is Heritage Park. 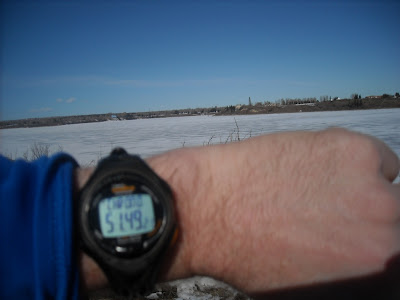 Rather than go back the way I came, I followed the bike path through a semi-ritzy neighbourhood to get back to 90th Ave. This is one of the roads that Calgary never plows. The ice on this street is at least 6 inches thick. 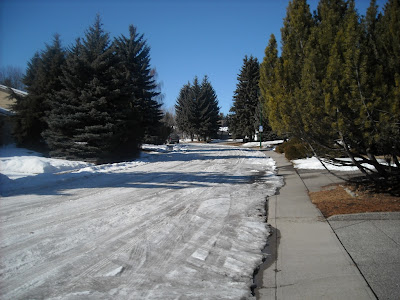 Ran back to 24th St and headed south to get home most directly. I have photos of this, but it's just sidewalks on a busy street. This last photo shows how Calgary is at least consistently inconsistent. Just like they don't plow all the road, they don't plow all the bike paths either. This is a small park not far from my home. Can you see the paved path starting where the road stops? No, I thought not. 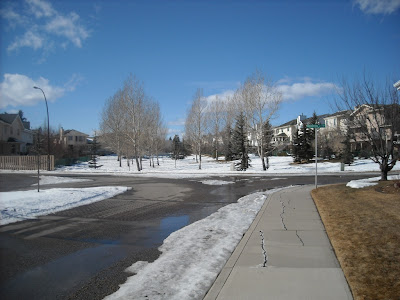 Aside from a few scitters on icy bits, it was a good run. Mapmyrun says 10.25 K in 80 minutes. There was starting about the hour mark where I couldn't find a stride. My right foot was hurting a bit, feeling tender, so I was wanting to limp on it a bit. After a while I found another stride, clumping along like one of those big horses that pull the beer wagon. Couldn't ask for a nicer day to run! Stretched after a 10 min walk home, and stretched a bit more throughout the rest of the afternoon.

Must say, I'm not thrilled with how blogger behaves when you want to add lots of photos. Grrr.