The word raw has many meanings. It's often used to describe a place or situation that has been untouched by humans. Which, as an aside, isn't much these days. Even remote places are affected by climate change at the very least.
There's also a meaning of unrefined. When one is contemplating making a change, we normally think about the completed change, the end state. Most people get stuck in, flailing away trying to shape the situation into their desired state. Often they fail.
There's two reasons. Usually the main one is that they have not fully considered the existing state of things. I've learned that it's always more complicated than you first thought. Or in a related sense, they have not fully considered the desired result, and once they get close enough to start seeing it, they realized it isn't quite what they had envisioned. The other main reason is not understanding everything that is necessary to achieve the change. They get bogged down in the details, or made a mistake in a transformation, or got sidetracked into an irrelevancy, or they get overwhelmed and just stop in the middle.
One of the conscious decisions we made when we built this house is that we didn't want a huge mansion. We didn't have much stuff back then and it seemed like we'd have lots of room. We didn't fully appreciate that our stuff breeds when we aren't looking. Not just us, everyone. That's why when I go for a walk and look into our neighbour's open garages, they're usually so full of stuff that is not a car, that they can only get one car into a double garage. Some can't get any cars in. We have a single garage, and there is barely room for our little car.
The basement used to be a big enough empty space that I could ride a bicycle in it. That was a long time ago. Various areas have been repurposed over the years, most prominently when we were doing renovations on the main floor and had to move stuff out of the way. Just in case you didn't know, books are a pain the butt and back to move.  I don't want to think about having to move the wine bottles.
This is why we've said that our only move from here is going to to be into an assisted living facility. Somewhere between that day, and today, a great deal of stuff is going to have to be dealt with. We have no children that we can inflict it upon. Much of it will be of no real value to anyone, I suspect. It will end up being another example of the transience of life.
More to the point, I've been contemplating some photo projects that require a bit of space for me to set up a scene, and play with lighting and cameras. Not a full blown studio, just a table top. An empty tabletop. Which is a harder thing than you might think. Horizontal surfaces seem to be a prime breeding ground for stuff. Like this. This is the table I'm wanting to use, and it's current state. 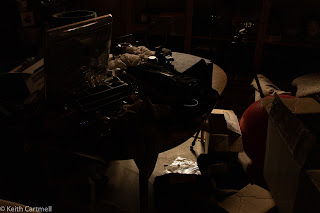 Yes, I could have turned on all the lights, and let you see every speck of dust. This is it's natural state. Dark. Mysterious. Even I'm wondering what some of that is, and how it got there.
When I'm actually working on it, I will of course turn on the lights. After all, I have to see what's there, and consider where to move it. And in a recursive thing, where I want to put it probably already has stuff, which will need to be moved or re-arranged. Which in turn, blah blah blah, you get the idea. Which is why you are not seeing the end state photograph here. Stay tuned for photo results using this space, but don't hold your breath. It's a work in progress.
Of the Day
Driftwood 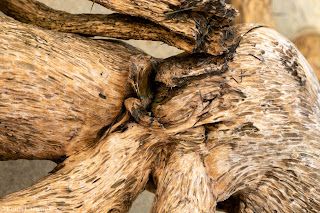 Peony
This years peonies are up and seem to be happy. Soon I'll have some to show you, while there are still lots of last years. Maybe I'll do a peony blowout blog. 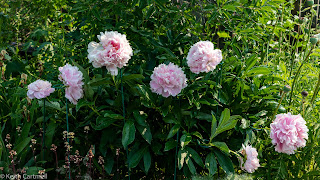 Flower serendipity. The lily is from 2017, a little later in May. 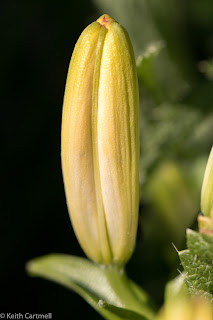 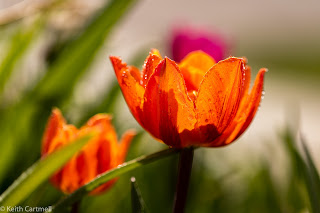 Film news, if not a photo. Some of you know I spent some of my first CPP payment on more photo gear. I'm hoping more 35mm film shots will be showing up soon. They're at the lab now. Stay tuned!