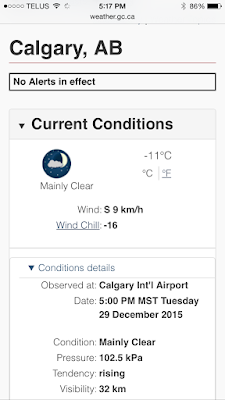 Yet I had the hankering to do, and eat BBQ. Linda had some chicken in the fridge, soaking up marinade. I just had to. Here's the starting view from the back door. 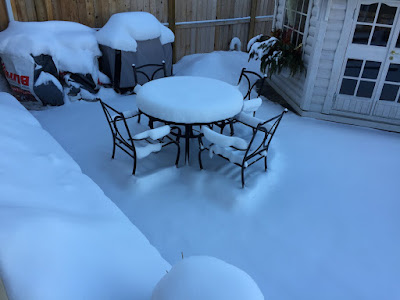 After some shoveling to get to the barbecue. See the smiley face? 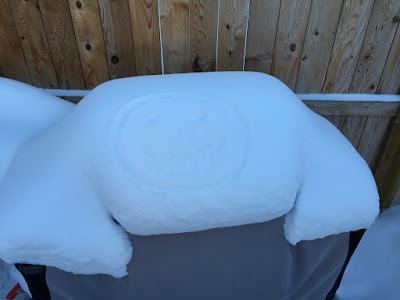 And there's the path to get to it without wearing boots. This is the snowfall in the last day or so. 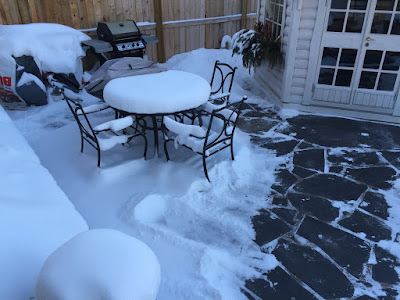 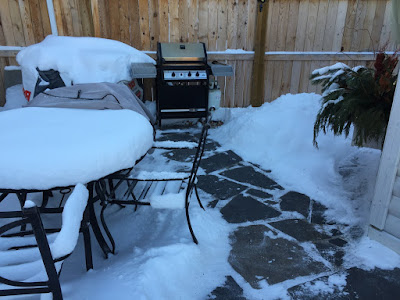 Much of the snow went onto the flowerbeds to help insulate the plants from the chinook that is coming. Nobody knows just when, but it will come. Non-gardening Calgarians will be happy. The roads will turn to crap, and the beautiful snow will be gone. The gardeners worry about the plants waking up and starting to grow, thinking it's spring.

Chicken thighs, with a maple syrup based marinade. Greek salad. Fresh baked scones with orange zest in them for dessert. The only thing hard about this is making sure to wear a jacket, and knowing when meat is done by poking it with the tongs. Because it's dark, that's why.

The swim that started today was great! From the first strokes I knew my arms had recanted their Pastafarianism. 500 m, 8:50!! Yay me! This is a new record for that distance. (First time I've timed that distance at race pace, but hush.) 3x100 on 2, all sub 100 seconds. 100 m in 88 seconds. Lots of noodling around, working on stroke, playing with swim toys. Coffee after had a side of Australian accent.

I was beginning to wonder what I had got myself into, though. I saw geezers on the way into the pool. The locker room was full of them. One of them had on a shirt, tie, jacket, socks and shoes, but was all too noticeably lacking underwear and pants. I was beginning to wonder if he'd totally forgotten and was going to leave like that, and was wondering even more if anyone would say anything. A couple guys leaving as we got into the pool but I'm not sure they were actually geezers. A super-not-geezer swam in the next lane for a while. We watched a geezer drive her car into another one while parking, to the distinct tinkle of something breaking. More geezers at the mall where I dropped off my jacket to have the zipper repaired. I fear that one day I will have become a geezer and not notice.

Onto the bike afterward for a short, moderate spin to wake up my legs, lots of stretching after.

More words. Since Monday a week ago I'm up to just under 19,000 words. This is comfortably over NaNoWriMo pace. I love my characters. They constantly surprise me. Dwen foils a kidnapping attempt because she smuggled a large caliber handgun into a formal meeting, hidden under a ruffly blouse, and used it. I hadn't known that she knew how. I'm wondering what she gets up to next.