So I actually did it. Really!

When people figured out relational databases, they had a party. After they had a few too many they designed SAP and Maximo. Then they got into the shooters and dubious dietary choices, and designed the database I'm trying to decipher. Properly speaking it isn't a database at all, it's a mutated spreadsheet pretending it's a database. Badly pretending. Plus, I have to work in T SQL, in a Microsoft environment, instead of PL SQL in Toad. Lets just say it was a primitive day, and leave it at that. I'm going to drink more coffee tomorrow. It's that or booze.

Things started out really well with a very nice swim. 1K 18:45 nice and easy, shoulders feeling good. 5 x 100 m on 2 minutes, each in102 seconds, plus or minus a second. Pretty pleased with that. Coming out of Talisman I was treated to this beautiful sunrise. What a great way to start the day! 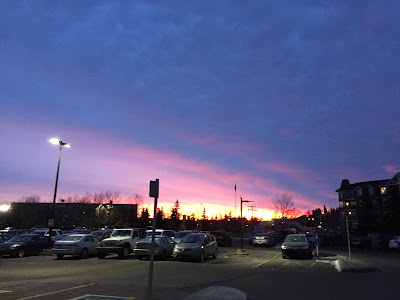 After work I was out for a short run, mainly to shake out my legs. 3.5 K 25 minutes. It felt pretty good, and I called it at the first bit of my legs feeling tired. It's supposed to snow tonight, and wanted to get it done while it was still warm.

Try not to get too excited at a glimpse of my leg and it's new toy. It's a way brighter and deeper red than the photo shows. It's battery powered and has either a steady glow, or a flashing glow. It's quite bright. It's made of some memory plastic so it curls around ankle or wrist. I didn't even notice it. 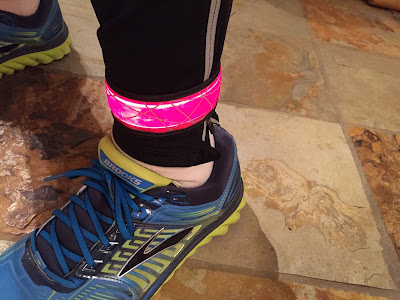 To backtrack a bit, Monday night was a 30 minute easy spin, with some core after, including 90 second plank. That was a bit too much. Ouch. Just before the bike I got this sunset photo for my buddy Susi, the clouds were all purple. 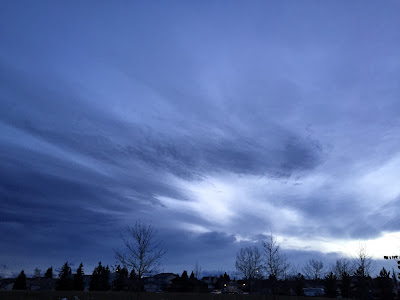 I can hear some of you grumbling, get to the point! What have you done and are there embarrassing photos? Well, if you looked carefully at my blog, you'd know already. I signed up for the Talisman 10 mile Tri in March. This will be my first solo triathlon since my Chinook Tri in 2012. Yay me!

This is almost exactly 13 weeks out, which is a surprisingly short time. Are you burning to know my training plan? Me too. I figure I can get through the swim in good time, then slog the bike, and try not to trip over my feet on the indoor run. 15 laps, I'll probably get dizzy.

Still, I'm enthused about it, and have been feeling a little keener about training. If that means you think I'll be turning this back into a workout blog and nothing but, fear not. I'll be using a high tech innovation. 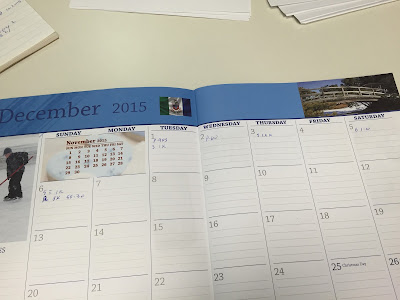