As my long time readers know, I've often referred to my running style as "T Rex caught in a tar pit, poor thing." Maybe I need to stop doing that.

When Michelle and I ran indoors at Talisman the other day we were talking about running, and I'd mentioned that image. She totally got it. Well, no, she didn't. Said it looked fine, both feet off the ground and everything. I was gobsmacked. By then it was too late, but we agreed that next time we'd shoot some video.

By golly, she was right! Here's a couple screen shots from the slo-mo video. 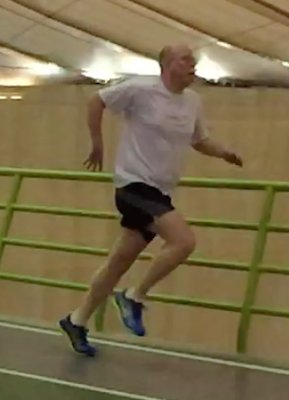 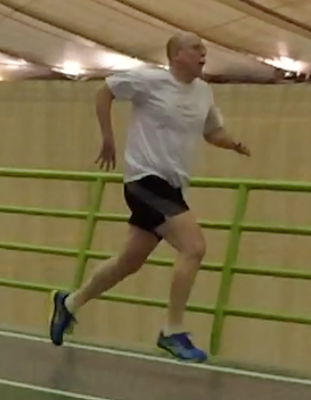 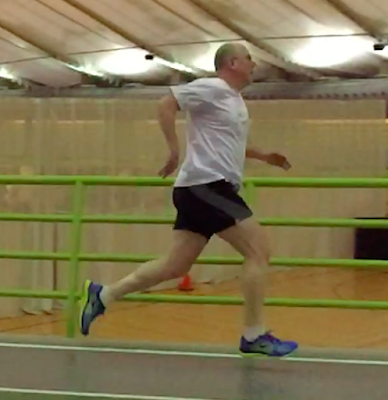 The movie was enough of an ordeal today that I won't try to embed it here. Maybe tomorrow. For a company that is supposed to make things easy, this was remarkably difficult. Michelle held the iphone 6 while I ran, and I held her 5S while she ran. That much was easy. Our mistake was shooting in slow-mo.

We were so eager to see the video on the big screen we rousted Ken and fired up theirs. Well. We got Michelle's up on screen pretty easy. No video flicker. We eventually, eventually, got mine up on screen, and winced at the flickering lights and clock. Really bad.

Once home I tried to Airplay it from the phone to the tv. Nope. Other videos played, but it's like it timed out waiting for the slow mo video. But I was determined. I synched the phone to the iMac, which was overdue anyway for a backup. Watched the video on the iMac and it was dreadful. But that iMac can't do airplay. (The poor thing is 7 years old, cut it some slack!)

Put the video into dropbox, and after it synched, I downloaded it onto the the Macbook. Watching it on the Macbook wasn't much better, but at least I could airplay it and get screen shots. Still really bad flicker, but watchable.

All the while through this Curtis is trying to help, because this task clearly had to be done quicker to get on with the important task. Feeding him. He came THAT close to being stepped on. Watching him, watching a movie of him, was funny, as I was trying to troubleshoot things. I think he realized it was another cat, but I'm wondering if he knew it was him, through some human deviltry.

And Michelle was right! I am getting both feet off the ground! Yay! At my long slow run pace the float time is a tiny fraction of a second, but when I'm running faster it's easy to see, as evidenced by the screen shots above. I'm seriously thinking of running the video back and forth to get a really good one, and maybe that will become my new profile shot. I need to look at it more carefully, and see what I can learn.

Now that we talked about the video, the actual run was just under 5 K, in 36:30. I'm a bit more confident of that number, and Sunday's number. We looked more carefully at the phone maps, and Michelle's is a bit weird in places, it's like the phone was missing a few points at the south end of the track.

Yesterday was an easy spin on the bike, about 45 minutes with some core after. Then a walk to the vet to get more cat food, discovering my neighbours suck at shoveling their sidewalks. Glad I'm running indoors. But along the way one of my characters started telling me about this fancy calligraphed invitation she got for a formal diplomatic reception. 3100 and some words later, I've got up a bit of a head of steam.

If this is retirement, maybe I won't go back to work in January after all. This is awesome! I'm sleeping better, I'm productive in several ways. Workouts are fun, (both feet off the ground running!) and I'm feeling strong. Anytime the words are flowing for writing is a good time. (Edit later, write now!) Plus I'm puttering around the house getting stuff done. Life is good.

Plus I've had some good news, but the details aren't filled in yet. More news when that happens.