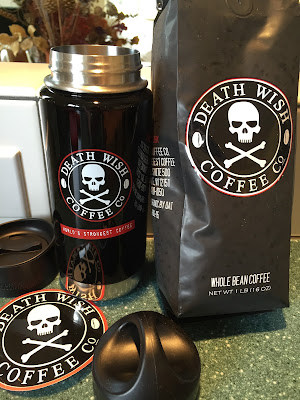 I didn't want to rush it by having to slug it down before work. Today I had lots of time, since my bike ride wasn't starting till 8. (that's a whole other blog, this one is coffee, coffee, and coffee.)

It smells wonderful even without opening the bag, and after opening, wow! The beans are dark and oily, which is how I like it. The instructions say to use 2.5 tablespoons per 6 oz cup. I had to look up those archaic measurements and find out how much it is in grams and litres. It turns out to be lots more than what I usually use.

For regular coffee made in a 1 L French Press, I'll use 50 grams of beans, and for a 1.5 L press, 75 grams. If made per their instructions, that's more than 100 grams of coffee per Litre. That's twice as much coffee as regular. Wow. Given the claims to have the most caffeine I decided to make 1.5 L of coffee, and I used about 60 grams of coffee.

Here's some photos of the experience. This is the beans. I hope you can see the glisten of oil on them. 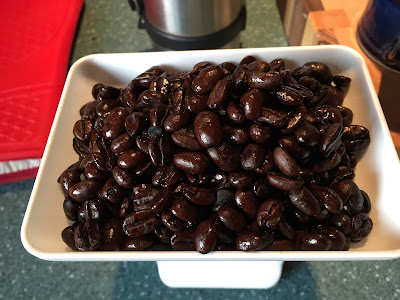 The grinder settings were unchanged. The Baratza grinder is set at 23, and produces small chips. Here it is in the receiver. 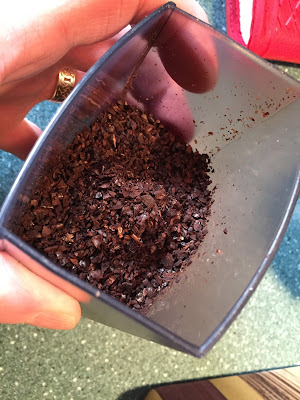 And dumped into the bottom of the French Press. 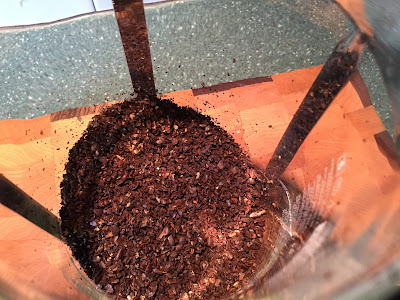 I hadn't thought this through. Normally I stir the coffee as I pour water over the grounds. It's just a bit difficult to pour boiling water, stir, and take photos. I hope you appreciate my struggles on your behalf. 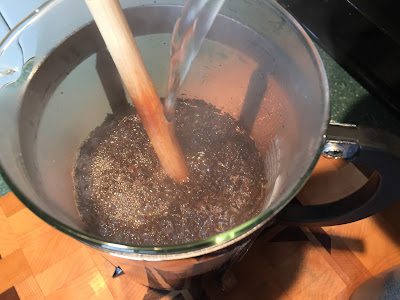 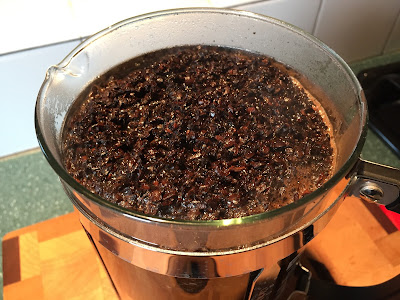 And the drinking. This is one tasty coffee! Yes it's strong, but it doesn't club you over the head. I drink it black, and liked it a lot. I had just the one cup, then was off for a bike ride. Normally on a Saturday I'd have 2 mugs worth.

My wife liked it, though she put in a bit more milk than usual. My riding buddy liked it as well. She had what was left in the thermos after the ride, still tasty.

Even with the coarse grind there are still some silty grounds that settle out in the cup. I deliberately took a sip that included them, and was surprised to find that they aren't the least bitter.

Will I try it made to the suggested strength? I'm not sure. Half strength made a very nice cup of coffee. Full strength might be more of a jolt than I need. Except for some days. If I haven't run out I'll try it.

So far so good. We normally buy our coffee at Crickle Creek in Priddis. There's lots of choice, and they deliver a very nice coffee to our door, and I'm very happy with that. Occasionally we will see them at the Millarville Market and I'll buy directly. I'm a big fan of buying locally where possible.

Here's the downside of Death Wish coffee. It's expensive. Amazon.ca is selling a pound for $47.60 just now, plus another $7 for shipping. Direct from them it's $20 a pound, plus exchange, plus shipping, plus border stupidity. I love my coffee, but holy doodle, this would add up fast, especially made to their instructions. The $20 per pound is fine, it's everything else on top gets out of hand.

I'm glad I tried it, and if some local buddies were looking to do a big order, say splitting a couple of 5 pound bags, and sharing shipping, I might get in on the action. But the price per pound makes it a special order for special occasions.