I'm writing this after a wonderful dinner of BBQ salmon w herbs and a sauce made with fresh organic  bruschetta left over from yesterday, complete with a nice salad, a deep amber Pinot Grigio, and I LOVE ROCKY ROAD ice cream. (Yes that is sung to Weird Al.) Eaten in the back patio, looking at garden with lots of blooms. The cats are on their harnesses strolling around with their little sniffers going full speed.

The temperature is perfect for sitting and finishing the last of my wine. I can hear the traffic out front of course; there's a lot of it because of a kid's soccer game, but right now it's somehow distant. There is a faint sound of jet planes. The only thing that would make it better is the sound of a big old radial engine aircraft droning along. That's something I remember from childhood and it's one of the things that means summer to me.

It's been a busy month at work as the project team winds down. Penn West has most of next week off, what with the stat and the office closed the next two days. Most people are taking off the Monday and Tuesday as well. I'll go into the office Monday since I'll be downtown to swim anyways, and I'll be leaving early Tuesday. Lots of people are out in the field this week, so right now it's sort of a peaceful interlude, like taking a deep breath before diving into the temporary madness that is Stampede. The tourists are already invading.

So I'm glad to sit and write quietly. Now I can hear bees buzzing as they work on the flowers. That's a very soothing sound. Celina doesn't yet realize she is tangled, and so is sitting there peacefully. The white peony has begun to bloom. I need more time like this. 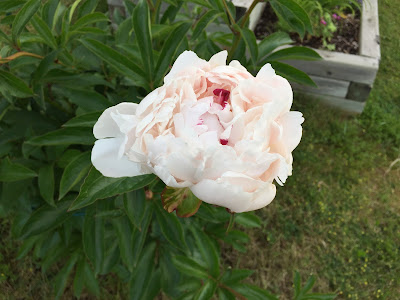 Just lately it seems like things have been moving faster and faster. Every 5 minutes I'm plugging something into my phone calendar, and if I ever lose it I'm doomed. Usually that's a sign for me that I need to take some time off, unplug, and relax a bit. Maybe the extra days off next week will help, but Stampede isn't exactly relaxing time. I think back to the various forms of foolishness I've witnessed over the years (none of it in a mirror), and wonder what it will be this year. I'm sure it will be something. Maybe I need to spend more time sniffing the peonies.

No doubt there is more. All I need to do is survive my 70.3 swim. This is my only race so far this year, and I'm not feeling any pressure to sign up for more. I have the best race buddy ever, and it's  going to be awesome.

We were all distracted in the office today for a little while. First there was the roar of motorcycles. About a dozen of them zoomed down 9th ave, then a motorcade of 7 cars, with some following police cars. Then a little later they zoomed up 1st street and swooped in to double park in front of the Palliser Hotel. We were all wondering who was going to get out, or get in. But no, it was just motorcade practice for the police. Either it's been a slow week, or important guests will be coming soon. 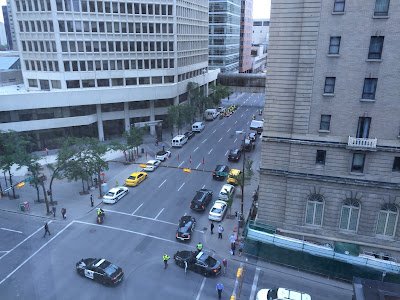