I was getting changed for a run after getting home from an open house about upcoming construction. There I was swinging my right leg gently back and forth, and I got a quiet, but distinct good click from my back. Then as I was limbering up my knees doing a squat, there was a click out of my left knee. Standing up it felt like a very bad click. My first couple of steps were very wonky as I walked around the house.

It settled down, and after a few more niggles and a bit of complaining I headed out, first walking, then running easy. I was getting some odd sensations in my quads, but nothing bad, and no further complaints from my knee.

30 minutes, 4.35 K. I never felt really smooth, but chugged along, gradually speeding up. At 3 K I picked up the pace a bit, but that only lasted 250 m or so. Overall it felt pretty good.

There is a lot of construction happening in our area over the next several years. The upshot is that if you like running or biking along the 37 St path between the reservoir and Fish Creek, or in the Weaselhead, you'd better get your fill this year. A freeway is going to go in starting 2016 sometime.

The only surprise about this is that its happening, but the theory has been there since the mid 60's. Discussion has happened in fits and starts, but mostly waiting, until very recently. Then the province and the Tsuu T'ina cut a deal on a land swap to clear the path.

We went to the open house to see information about a pedestrian bridge over Anderson Road. This is the first we've heard of it. The last plans I saw had the bike path integrated with the various fly over lanes somehow. The location is marked on one of the maps below. It's quite a nice bridge, and will be better than the current level crossing. It should be done by the end of 2016. Me and some run buddies might have to do some planning and checking before heading out starting the end of this summer.

There was also lots of information about the ring road. Here's some photos on the parts nearest us, but there's a lot more to the project. I was going to comment on them, but then I realized if you live here, you know the area. And if you don't live here, my telling you about it isn't going to help. 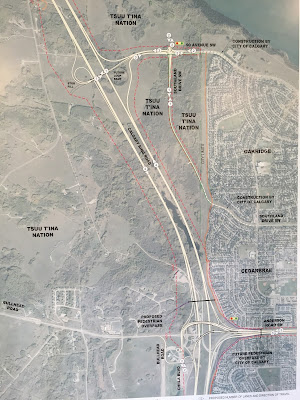 The bridge being put across Anderson looks quite nice. I voted to paint it plaid, but I don't think that went over very well. I think our house looks quite handsome in this photo. 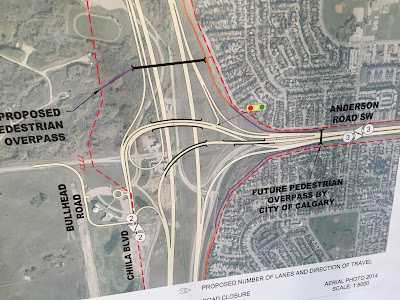 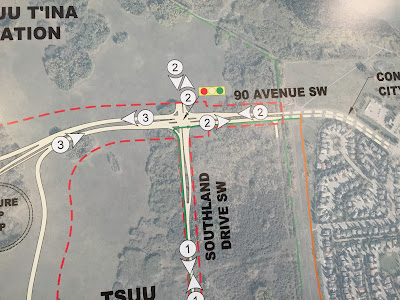 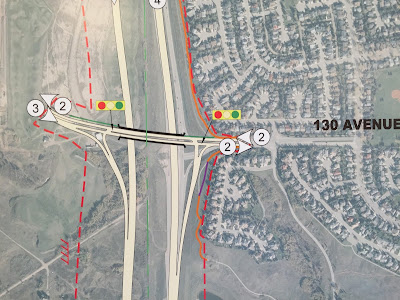 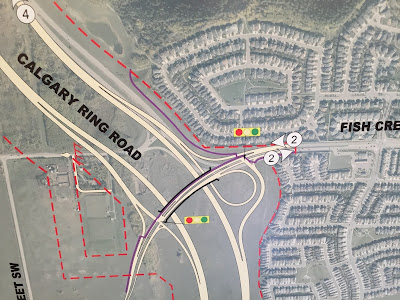 This one is the one that worries me the most. Just where the red line crosses 22X in the lower centre part of the photo is exactly where a zillion bike riders park and want to start their trip down Road to Nepal, or out 22X. The old 37 St is going to be closed. This is good in one sense, since it's the scariest piece of road I bike on. But after all this is done, it's going to be very difficult to ride from our house down to a part of 22X that isn't a superhighway. In fact, I think it's going to be impossible. 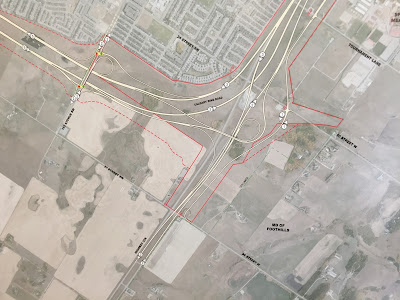 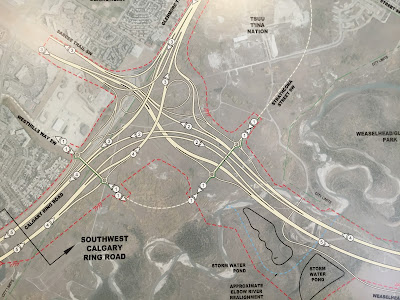 The only upside for all this is that our commute downtown isn't going to be impacted.