He was speaking at the Outdoor Adventure show here in Calgary today, looking for volunteers for his new adventure, Lacrosse Quest 24. The One In Charge has officially denied me permission to participate as a player, but I have sent in an email to be a volunteer. There are several other efforts he's working on, including one in the Cook Islands in September, and to break the record for the longest soccer game in October. 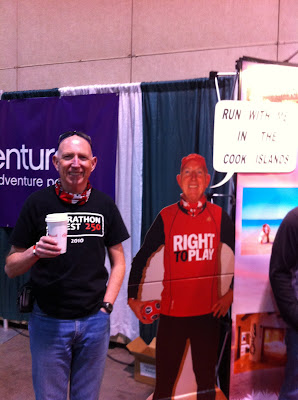 Neil Z found me, and after listening to Martin, we wandered around the show. It wasn't as big as I thought it was going to be. Lots of interesting displays though. There was a helicopter on display and I chatted with the pilot for a while. I brought home lots of stuff about potential vacation spots. There was even a pair representing the Iceland tourist industry trying to encourage people to come visit. I love Nordic accents, though hers was very faint. Iceland would be fun, I think. Maybe that's the next place to go.

Other than walking around the show, there was no workout today. Last night we visited buddies in Okotoks after we all went to an art opening there. Bob and Connie Pike do a variety of artwork. About half our dinnerware is by Connie. You may have seen it in some of my food photos, the green and copper plates. Her pottery is really nice, it's a pity there are limits to how much one can use. Bob does interesting metal work that calls to me. It's interesting, and very well done, and I like looking at it, but so far none of his work has impelled me to reach for my wallet. Many of his pieces are a good size and I don't know where I'd put them even if I did buy one.

Part of the problem is my really particular art tastes. At this show, in the other half of the building there is a display of paintings. Gord was looking at one of them in a puzzled way. Gail was chatting with another guy nearby. As I walked in I was going to say to Gord, in a near conversational level voice "So, is this shit art or not?" At the very last second something the other guy said to Gail made it clear that he was the artist. That would have been a whoopsie for sure. I still don't know if it's really art and I'm a Philistine, or it's someone trying to create an art market for themselves. He certainly had strong opinions about it being art. At least with Bob and Connie's work, I know it's art, and almost all of it is practical, which is more important in my books.

The next question is what art do I like, and what qualifies me to say what's art and what's not? Good question. (Have I ever mentioned that I don't like it when an interviewee says "Good question?" It means they're trying to evade the issue.) One of my plans for next week is to go on a ramble through the +15 system and take pictures of public art. I've posted some pics of public art, most of which has been temporary displays. If anyone wants to join me on this ramble, let me know. Maybe I'll even run a contest out of it. My thought is to comment on the art.

Sadly, the good stuff that happened on Thursday afternoon wasn't quite good enough. But that's the way the world works. On to the next thing.