There was a young lady named Bright

This is the only clean limerick that I know, and it relates to todays ride.

There was a young lady named Bright,
whose speed was much faster than light.
She set off one day
in a relative way,
and returned on the previous night.

Take a look at the weather forecast just before I went outside. 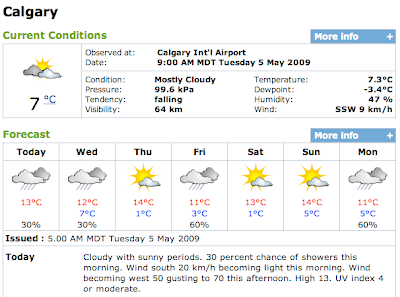 I really, really don't want to go on the trainer again till near the end of this year. If the choice is cooler and dry, or cool and maybe wet, I'll take dry. I need to learn to ride in the rain sooner or later, but not today. I drove out to 37st and 22X to get a last chance of seeing what the weather was really doing out there. The forecast is for the airport, and that's a very long way from where I was going to be riding, and things change fast in the Foothills. I brought several choices of stuff to wear.

In the end it wasn't that bad at all. No rain. Wind 20 to 30 Kph. I think that temperature is about right. I wore two long sleeved tech shirts and my reflective wind breaker that flaps in the wind, tights, gloves. My toes were just getting a little cool at the end of the ride.

Started out heading west, nice and easy to warm up. Into the wind, I might add. Rode 46 min, started workout set, turned around at 1 hour, having gone about 20.8 K. I was back at the car 35 minutes later. ZOOM! The wind was really something. I was treating it as a training exercise, trying to keep a good line in spite of being buffeted, and staying strong going into it.

Training set was 4 x 4 min hard (peaking into Z4), then 3 min easy. Let me tell you, it's hard to be 'easy' going uphill into the wind. But such is life. The rest of the ride was warmup, steady aerobic at comfortable pace, which I interpreted to be faster than just riding along, but slower than race pace, and then cool down. That last doesn't take long.

Had a snack, then stretched. My calves are a little twingie, and I promised them some love. Rather than put down some crazy decimal number of hours, I'll say 1.5 hrs.