No, I didn't drink 90 bottles before the photo ramble. I got what will become 90 bottles of wine, plus or minus a few, plus 6 weeks or so. Driving to Red Deer for the wine kits saved us $120. Well worth a few dollars of gas money and a bit of driving.
Between COVID and some recalcitrant work SQL (I blame the data), I've been pretty much a shut-in for much of this year. I wanted to take the scenic route and see if I could find any nice photos. It so happened a buddy had suggested a walk in Fish Creek, but was happy to change plans. Being of a similar age and mostly in the same business, we talked of many things during the drive.
I'd been to Dry Island Buffalo Jump Provincial Park (Kenney hasn't sold it, yet) in the summer a year ago with Neil Zeller, and had wanted to go again. What with winter and COVID, I wasn't sure of whether the park would be open, but I knew the view point would be open, and there's some lovely rolling foothills territory between there and home. The plan was to zoom up to Red Deer, get the wine,  head out to the park,  eat lunch, see what the photo situation was and make the appropriate decisions.
I'd sort of thought that even if the road to the river was closed we might choose to walk down. Several other empty cars were parked at the top, and I'm guessing the people in them had done just that. It turned out to be pretty cold, with a raw wind. We didn't hang around all that long up top. Both of us still want to go back in better weather, and explore the river valley. If you are thinking of going, choose a day when it hasn't rained in a while. The kind of clay there makes the road impassable when wet.
We stopped several times along the way to explore potential photos. Some of the scenery fits in well with some of the themes that Sean is working with. I'm not liking any of the big hay bale shots I took along the way.
Even though the light was really flat, and we were thinking that all the photos would be converted to B&W, I was surprised the colour showed up as well as it did in this panorama of part of the river valley.

Some more shots of the day. You can see why we thought B&W, but that looks even more dull. I liked the lines of trees. 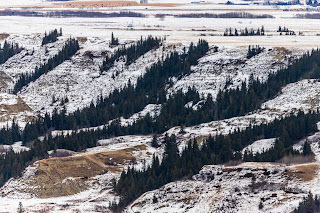 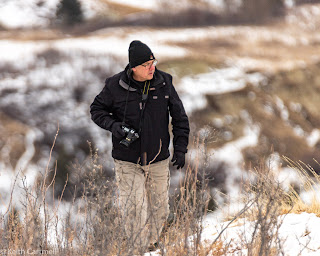 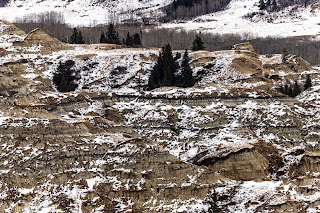 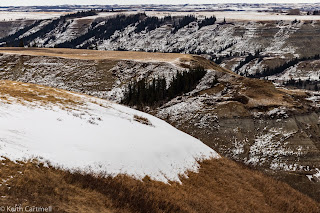 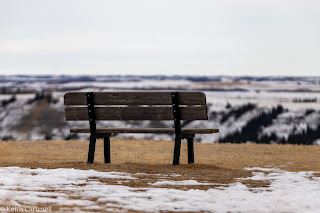 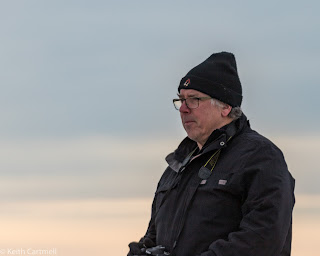 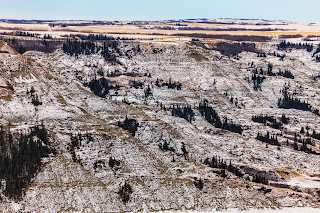 We had seen this shed, and another nearby on the way in and made a point of stopping on the way out. There's another version of this I'm working on where it looks like the trees are disappearing into the mist. 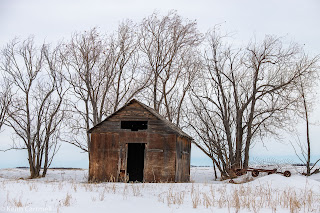 We had to stop near Torrington to let emergency crews finish cleaning up what looked like a head on collision. The road was covered with blowing snow there and it was really slippery. Shortly after we got started again we watched a little red car driving way too fast lose it on another patch of snow and disappear into the ditch in a cloud of snow. While stopped I admired the wind farm. I hadn't known there was one there. 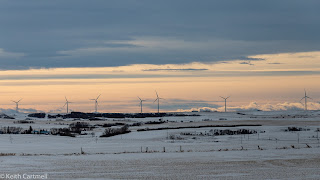 The big sky. There's lots of places in Alberta where you can look out from the road and see nothing but fields and sky. 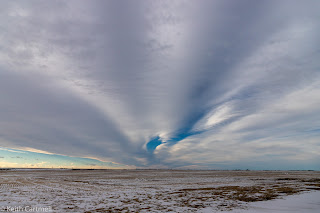 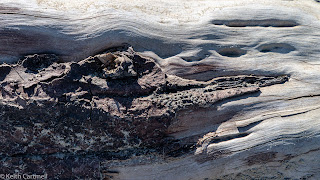