Yesterday was a first, I'm pretty sure. In all the many photos I've taken, dogs are only an incidental feature. I'm not going to scroll back and check, but I don't think a dog has ever been the actual subject of the photo. Many cats, including big wild cats. Foxes, various deer-like creatures, a bear, a snake, lots of dragon flies (and a great many photos that are almost of dragon flies) and many other animals, even though I don't think of myself as a wild life photographer. But no dogs. I'm not really a dog person.
I've seen lots of dogs and dog owners out for a walk, and my main hope was that they wouldn't react badly to my running past them. Even when I was walking, the humans say hi, the dogs tend to be a little more enthusiastic as they greet anyone around them, but then everyone would go about their business.
It's different when you're walking with a dog. Or rather a pair of cute dogs. I was invited to meet Ruby and Midas, a pair of 5 month old Rotties. They are even cuter in person than in the photos, but then, this wasn't a photo session. This was a stroll with friends. It took the camera, mainly because it's been jealous about the attention paid to the work computer. It gets more of an outing later today.
I needed the airing out. For a guy that's supposed to be retired, this particular data migration is taking a lot longer than anyone expected. I won't get into a complicated table structure, a non-existent primary key, and really poor foreign key, nulls where there should be data and SQL operations that have to account for nulls, all in MS Access. Oh, and don't forget, this is all in a Citrix window. Yeah, I know, only a couple of my readers feel my pain. I chant to myself, I get paid by the minute.
Back to the dogs, which is why you are here. 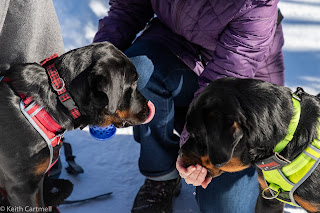 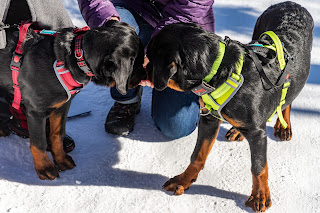 Lots of other people walking dogs slowed or stopped to chat. The dogs are pretty well behaved, but they're young and still learning. I don't know if it was because I was with dogs, or it was just the right time of day, but there were a lot of dogs and people. The two parking lots were almost full, and the paths were busy. Maybe I'm not the only person with cabin fever.
Other than edit the photos, the rest of the day I did nothing. I needed a day of nothing.
Of the day
Driftwood 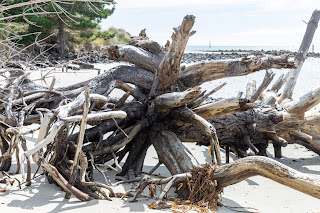 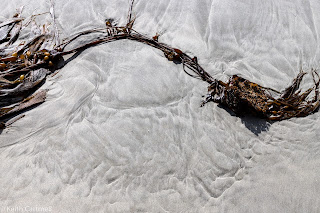 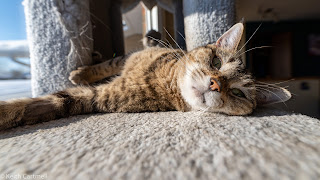 A semi-domestic coyote in South Glenmore park. It was just trotting along, not far from the main path, not bothered by all the people around. 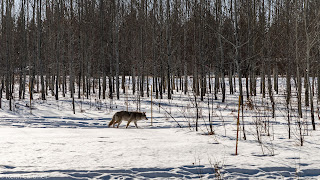