So that couch to 5 K thing, plus an emergency vehicle

How's that going, you ask? (Actually, I know nobody has asked that. Bear with me.)

Two runs, two days apart, 4 K each, both just under 29:30. Both feeling pretty good. This is about the pace that BRBE would run at, though for a lot further. The lessons I've learned from previous efforts is that I'm taking longer on warmup, longer on cool down, and stretching after. I'll probably hang out at 4k for a while, nice and easy. Two of the major secrets to running is consistency and stopping before you have to stop.

There was a swim in between them, one of my best swims in a while, 1K, 19:30, dodging two other slower swimmers in a lane. Neither was good about pausing to let me pass, so I had to time it just right and push up to about race pace to pass them. Lots of fun.

If the hot tub had been guaranteed to be open, I might have made the time to swim today. That's what I really wanted, the hot tub. A rest day is good. I was out last night on a photowalk with Neil Zeller and a bunch of people that follow his Facebook page. Lots of fun, even if I didn't get many good shots. These are the ones I like best. 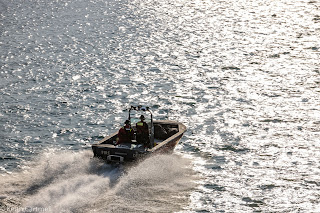 The star of the show. 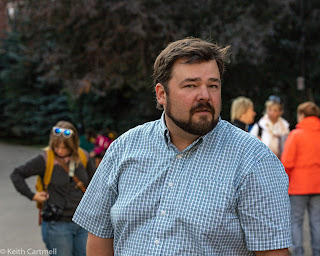 Some of the participants. I was thinking about shouting out to have everyone pointing their cameras over the rail, but this is more a social occasion than a photo taking occasion. 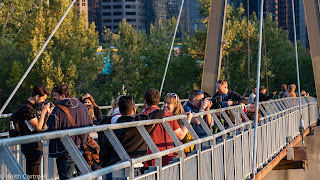 The fire rescue boat zoomed by as I was on my way to meet the rest of the group. I'm glad I had reset the camera and cleared the chip before I got out of the car. I had only a few seconds to get it up and let the camera find the focus. A few shots and it was a dot in the river.

The boat zoomed by pretty quickly, so I got the idea they were on a mission. It was a nice day out, so I could easily believe that someone had handed over their beer and said watch this. Or maybe someone slipped on the rocks and fell in. It's easy for things to go wrong on the water, especially if booze is involved.

It seems lately we've had lots of emergency vehicles in our neighbourhood. There's a story to almost all of them, and I sometimes wonder what it is. It's none of my business of course, till they come for me.

As a writer I often think about human situations, wondering if there's a way to work what I see, into one of my books. A set of tracks left in the snow on an embankment means that someone had an exciting few moments. A car sitting there with a police car behind it, lights flashing. A tow truck with a mangled car behind it. Sometimes the most implausible series of events happen and there the situation is. I am convinced that the various emergency crews have some amazing stories to tell.

The problem for a writer is plausibility. A simple thing like two characters meeting, so the writer can get on with the story of them falling in lust, breaking up for a while, then realizing they are the right person for each other, and settling down to live happily ever after. That's a harder thing than you'd think, writing two characters meeting. Do it wrong, and the readers roll their eyes and pick up another book. There's a story out of the photowalks, where two people met at one of the fireworks classes. Both single because of the death of a spouse. Now they're married. It would be tough for a writer to do that one and not sound like a cliche.