July image of the month.

It's been a busy month. In addition to the work thing, I had several photoshoots, including a pancake breakfast, a triathlon, and a couple photo rambles of my own. By my own rules, the events someone has asked me to shoot don't count towards photo of the month. Well, maybe if it was extraordinary.

I've really been looking forward to this long long weekend. One of the top things on the list is to get the image of the month posted. Here's the contenders. I sometimes post it in advance to build the anticipation, but you get it all at once. Maybe don't scroll down instantly, and let the suspense build. Of course there's lots of flower shots, being busy with work and not being able to get out as much as I'd like. 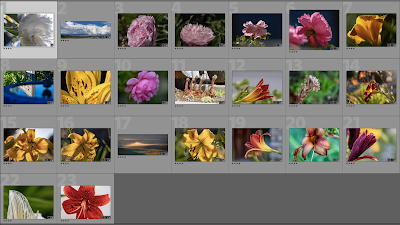 Second runner up. I tried a bunch of shots shooting the light through the blossoms, and I think this is the one that turned out best, though some of the yellow lilies were right up there as well. For some reason the red of the day lilies comes out really well on screen, but the red of the peony doesn't. Plus the background in the evening light really pleased me. You'd never know there's a truck in it. 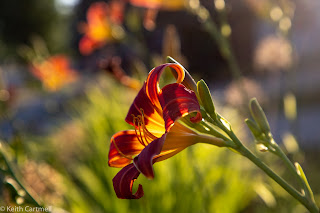 First runner up. These dark lilies are difficult to shoot, especially the shadowed side. The morning light just caught the tips of the blossom, and there was enough light to capture the texture of the blossom without washing out the dark colour. The yellow background for contrast worked out just like I hoped. 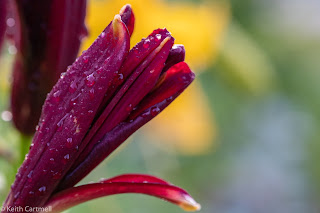 And the winner! It looks like a panorama but it's not. It's just the way I cropped it to get rid of an ugly sky. This was during a photo ramble with Sean, taken not far from Chain Lakes. I love how the morning sun has illuminated that patch of fog, and the gently rolling landscape. The power lines hinting at the curve of the shadowed road, and the patch of sun in the upper third adding interest to the shadows.

As always, it's a difficult choice. The flowers are mostly eager to please, trying to show off as best they can. Well, not the dread Alberta Rose, it swears at me when I try to photograph it. I try to get out every day and see what's new, to capture it before the next hail storm comes along. We've had two big ones now, and a few lighter sprinkles. The garden has taken a bit of a beating, but it mainly affects the flowers in full bloom. Most of the buds are ok, so we'll be getting more blooms soon. The dahlias are still on track. I'm sure the bees can't wait for them, and me neither.

Did I miss your favourite? Not all of the ones in contention have been blogged yet, so if there's one (or more) you particularly want to see bigger, be sure to mention it to me.