Officially NaNo-brained out, yay me!

Did I call it or did I call it? When I started this NaNoWriMo, I knew I was writing a bridge novel between two other chunks. To at least start the bridge, I had to lay some groundwork that was a retelling of what I had done before. I was looking to make some specific changes, so it wasn't a copy paste, except for one very little bit. To make up for that I decided I was going to need 55K words to validate.

Last night I was going through and cleaning up some notes to self in the to be validated text area. I got a bit sloppy and put them there instead of document notes. There were a few other little tweaks and tunes, and I realized I'd missed a few paragraphs of a certain conversation along the way. It made sense in my head because I knew the context, but when you actually read the words it's entirely different.

When I checked just before shutting down, I was 55032 words. There is a sort of beginning that at the moment makes more sense if you read my (unpublished) The Bone in the Digester. There is a middle, even though I didn't fully develop the sinister foreshadowing (that editing!), and there is an ending. There needs to be a few little snippets throughout the book to more fully support the ending for those that haven't read Bone.

I am really pleased. This was a bit more of a struggle than last year, when I pounded out 66K words to validate, and then kept on writing. It just flowed. After a year of editing, that book is now up to 110K words. Yeah, go me. This year I didn't have such a clear idea of the sequence of events, just an ending point, but it came together. I also had fewer characters to work with, so there are fewer interactions to write about. If you're a fan of story by conversation, you'll love my writing.

This year's NaNo book might grow in the editing too. I want to take a step back and integrate all 3 books, then figure out if I've got 2, 3, or 4 books here. One suggestion I've had is to break them into novella length and publish them fairly soon after each other. I'll have to look to see if there are natural break points. My main thing is the story. I don't want to distort it to fit some arbitrary word length restriction.

I'll take a couple days away from it, then make another pass over the weekend, and then validate. Or maybe I'll do that tomorrow. I can't think of any other things that need to be inserted. and everything flows about as well as a first draft flows. The sooner I validate, the sooner I can display my winning token!

Since there was no response to the little snippets I did, there won't be any till the entire draft is ready for draft 2 readers. Line up forms to the left, and each person gets a big cup of high test French Press coffee.

Curtis is pissed at all the lap time the laptop is getting instead of him. I've spent more time sitting and writing than I probably really should have. I can feel some creakiness. There have been a few swims along the way, mostly pretty good. Today I got the really good nose clips I ordered, so I'm looking forward to the swim on Friday with them. With the current ones about every 3rd flip turn I have to push them back on, and it slows me down. Here they are, the thin ones at photo top are to be retired. I have another brand new, unused pair of those, so if you want to try nose clips, they are yours for the asking. 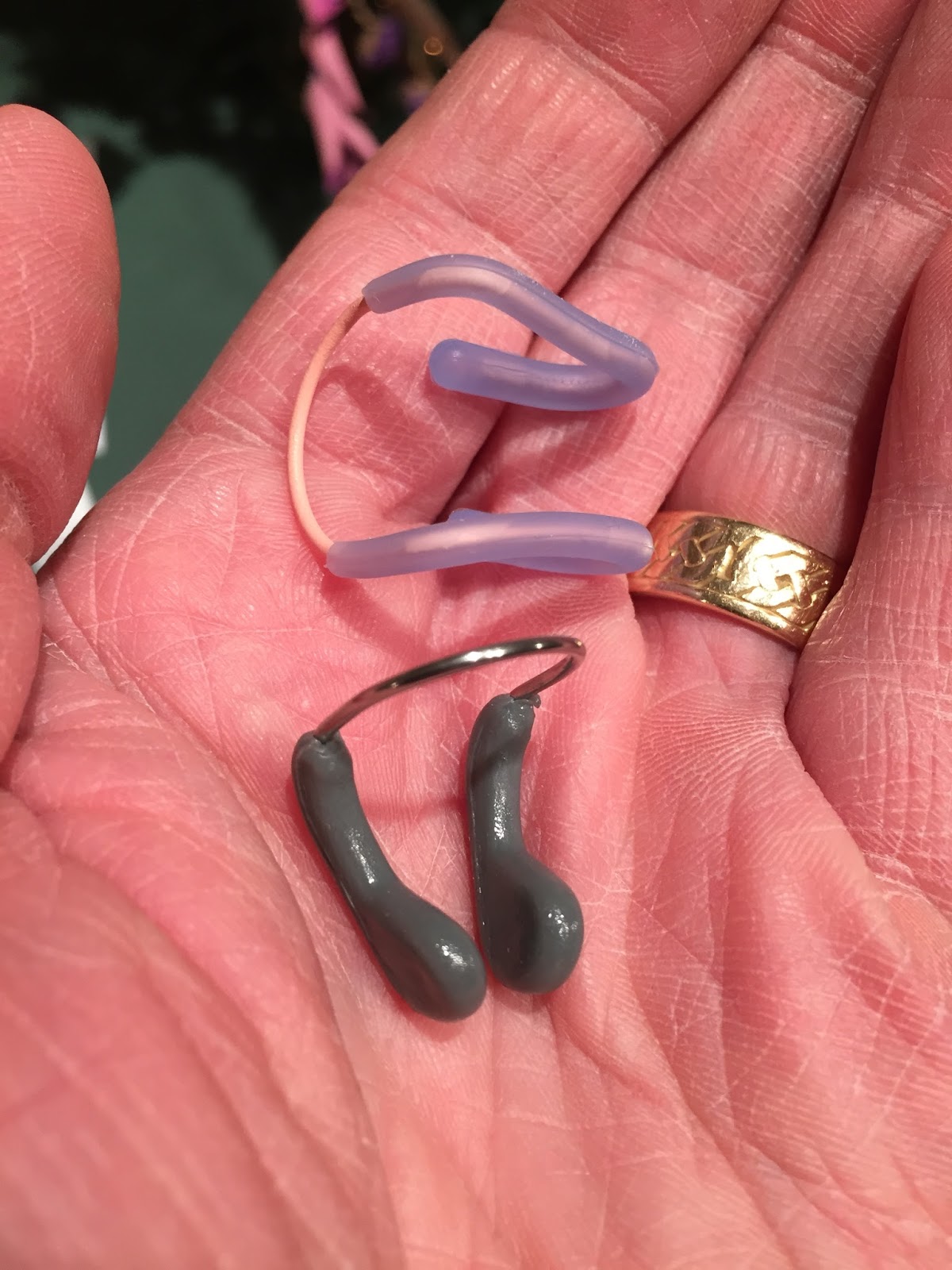 No running, no spin training. Legs are still tighter than they should be, and I'm feeling a little bit more tired than I should be. There's no obvious reason, but I'm not sweating it. November is a good time to dial back.

Part of dialing back is getting some face time with friends. We had brunch at 80th & Ivy last weekend, and that is sure a winner! We had a perfectly lovely time. Don't believe the grumpy short person, we all had a really good time, as did she until shortly before the photo was taken. 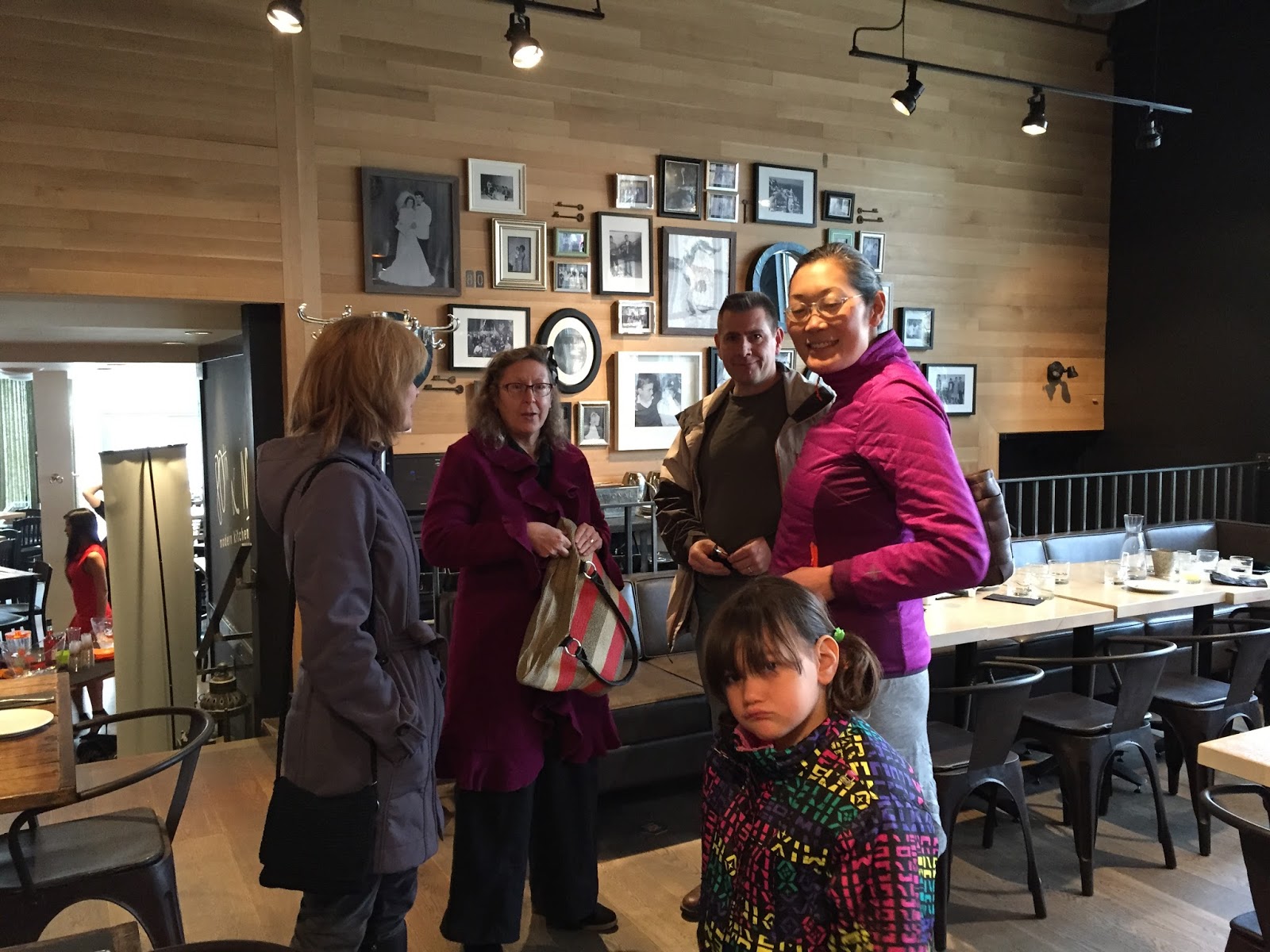