The first home run ever in my life

This was better. I met up with my buddy Michelle and we ran home from her work, which is a few blocks from mine. Aside from waiting for a few lights, and a horrific photo op, it was a pretty steady 7:30 per K pace while running. Very conversational. It's a great way to relax after work. 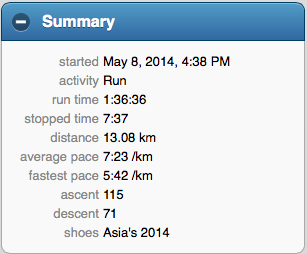 It turns out to be 13 K to get within a few hundred m of home, then I walked to cool down. It was a perfect day to run, warm and sunny with a bit of a breeze, but not too hot or too windy. We felt really smug as we crossed over Glenmore to look at all the traffic stacked up.

I've had 3 tries now running home from work and finally made it. Yay me! The first try was last year going down the Elbow pathway. I made it to South Glenmore park and Linda had to come get me. Last week I made it to Michelle's house and she had to give me a ride home. (Thank you again!) Tonight I made it all the way home under my own steam. Third time lucky and all.

Last week my hips were killing me near the end of the run. Today it was more solid tiredness down at the bottom of my thighs and knees, but everything kept on working. Starting after waiting for the lights was a bit tough.

Long stretch session, and I'm writing this with the laptop sitting on a wine bag full of cold water. It feels very nice. The hardest part was to go from standing there looking at my mat, to lying down on it. Then standing again. Both took some thought. Which is probably a good thing in the long run. In a few years I'll probably need to do that as a routine thing.

So what do you want first? The photos or the map? Here is me lurching along like Quasimodo or something. I'm not actually running at pace, but you could be forgiven for thinking I was just standing there. And the other, drink in hand, leaning to one side, turning around to see if the photos were over. The others are worse. Trust me. It's the subject, not the photographer. I really must do something about that gut when people are there with a camera. 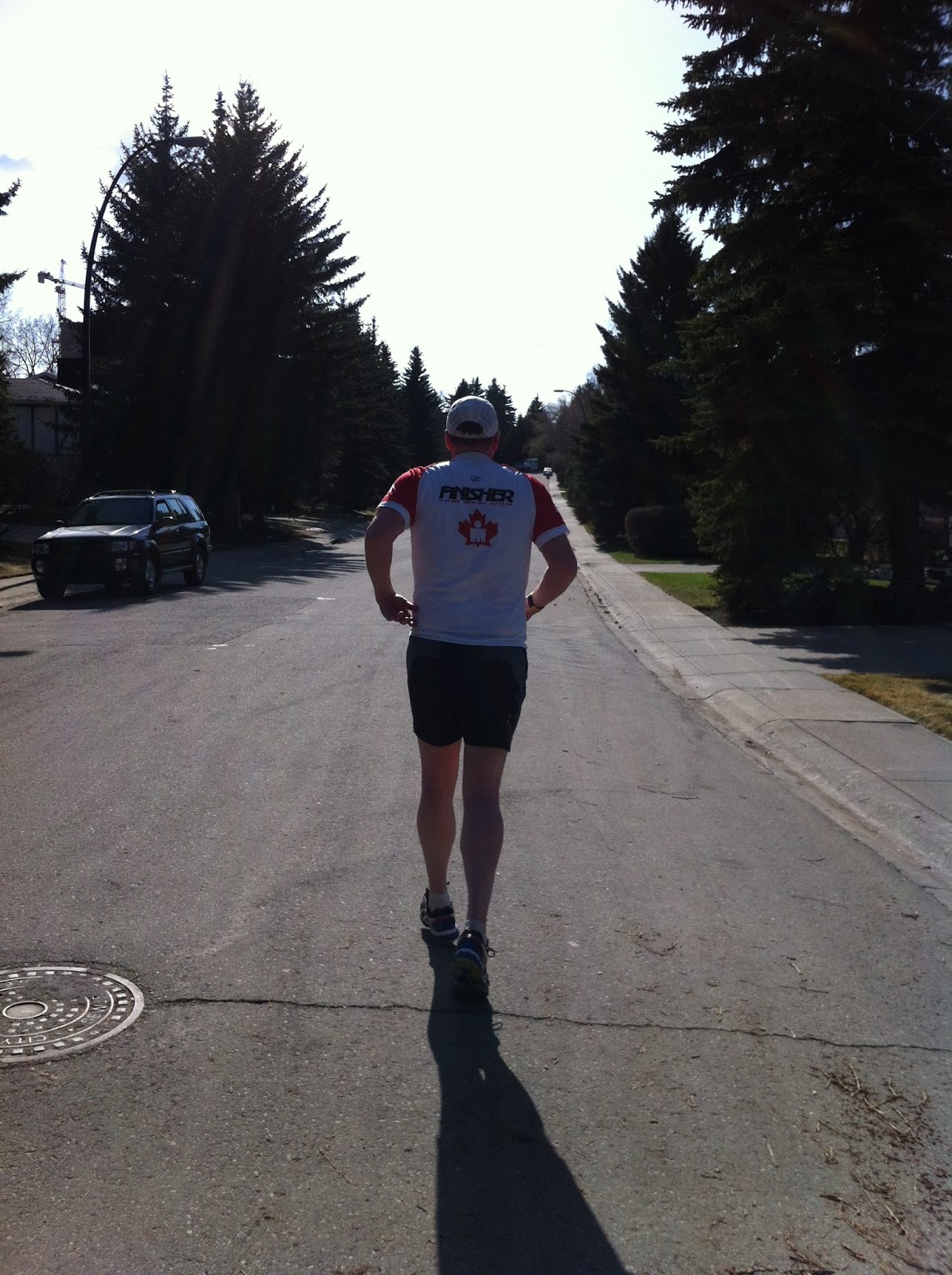 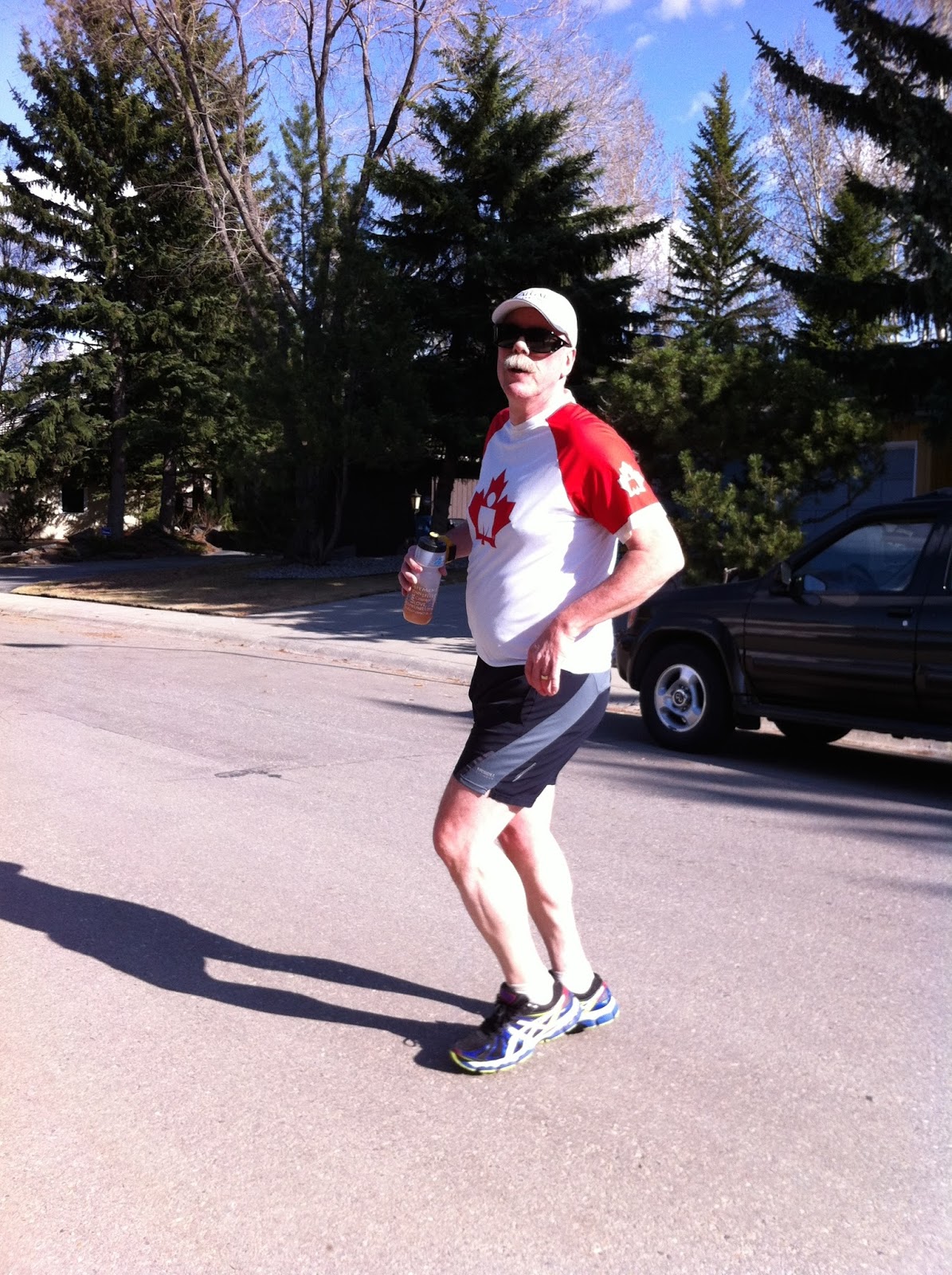 Here's the pace graph and map, with the beginning cut off deliberately. The big peaks of the graph are called 17 Ave, 90 Ave, Southland Drive, Braeside Drive, and Anderson Road. This year is really the first time I've ever been able to run at a steady pace. My long time fans, if they remember, know I'm all over the place. 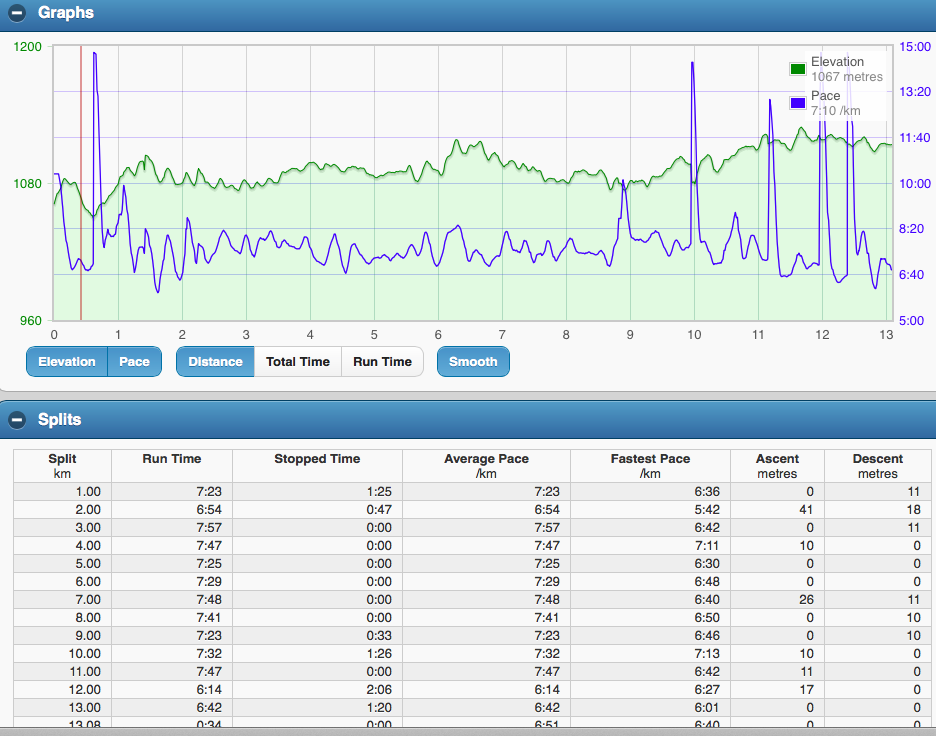 Race day is getting ever closer. I was hoping to sneak in an 18 K run before the race, but it would have to happen this weekend, and it's looking like another weekend of crap weather. Maybe I'll suck it up and go anyway. Or I'll get done what needs to be done in the back yard. A man has to do what he has to do.