The snow is mostly gone. Oh, there's still lots of white around, but at least it's not several inches deep anymore. Wednesday they say will be nice. Our backyard landscaper is already worried about being a couple days behind, and the season has hardly started. They're still working on remediation projects from last year's flooding.

Trying to write instead of working in the back yard was interesting. Earlier you saw how Celina tried to 'help'. Well, yesterday I had supervision. Mega-supervision. Curtis loves this posed. He reminds me of a 50's era punk, with the pack of cigarettes rolled into a T shirt sleeve, driving with his arm out the window hanging onto the roof. 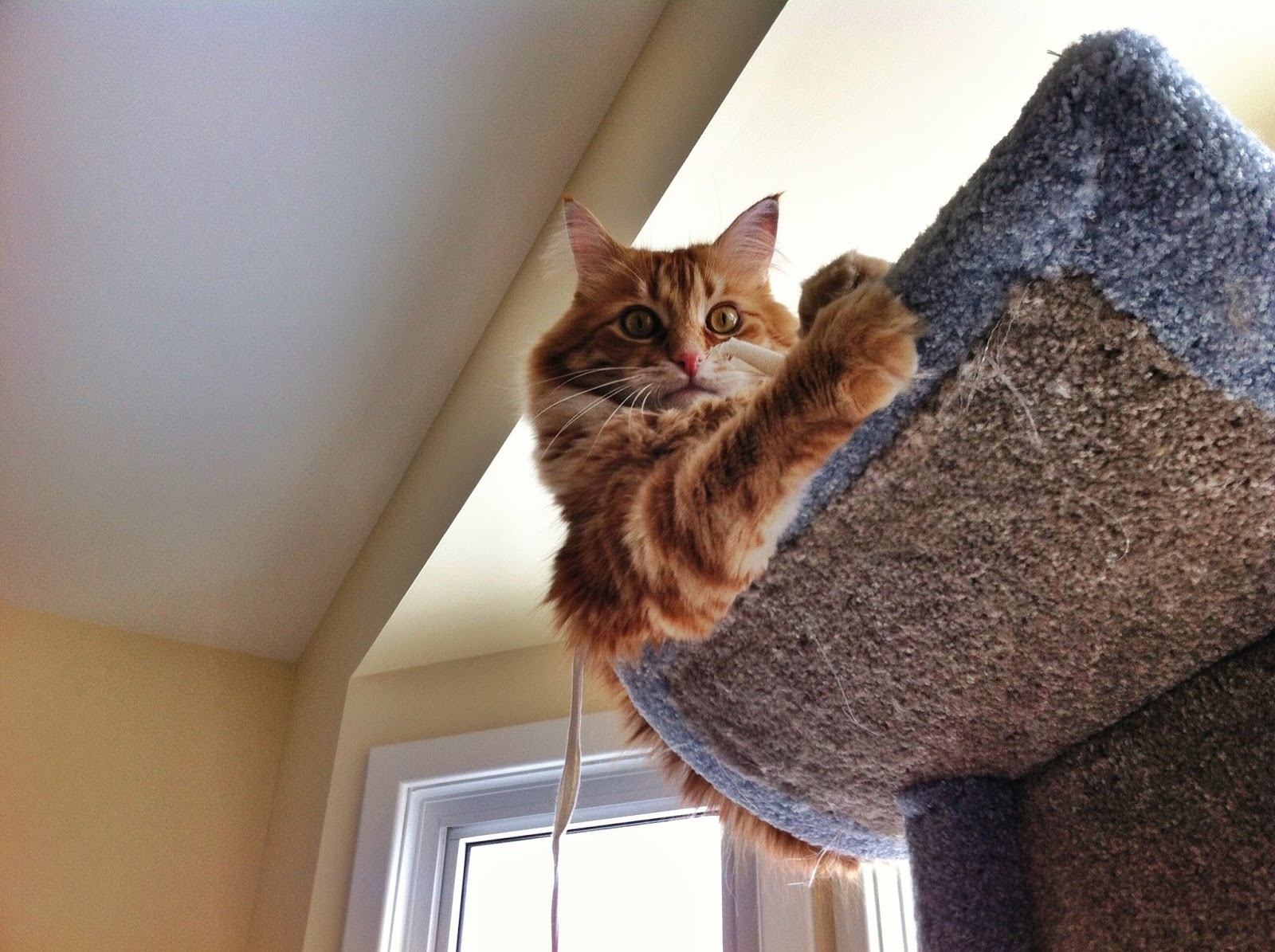 And I was distracted by cat antics. I suppose someone that knows the camera quality specs for an iPhone 4 could figure out how fast the paws have to be moving to blur the photo like these. 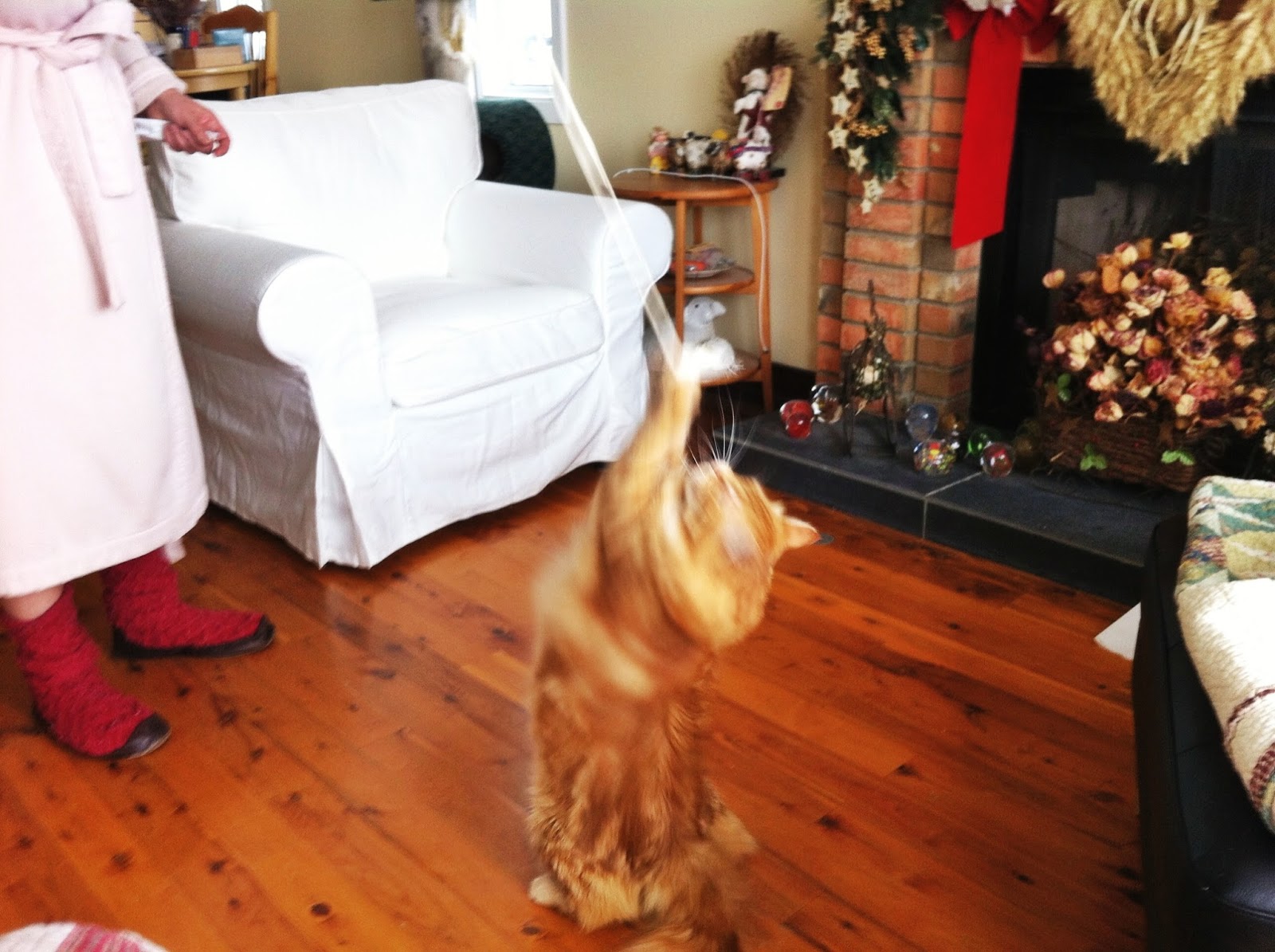 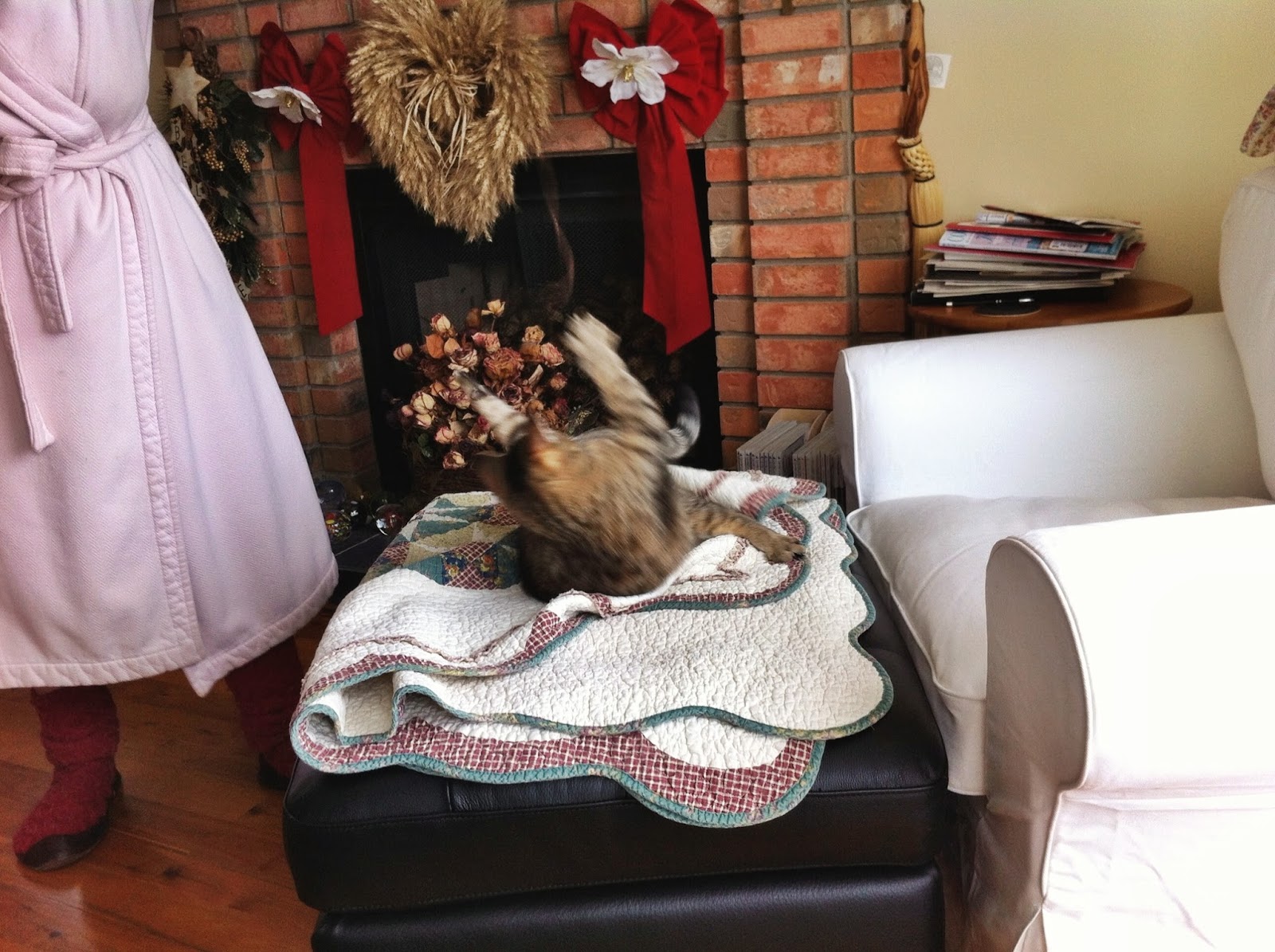 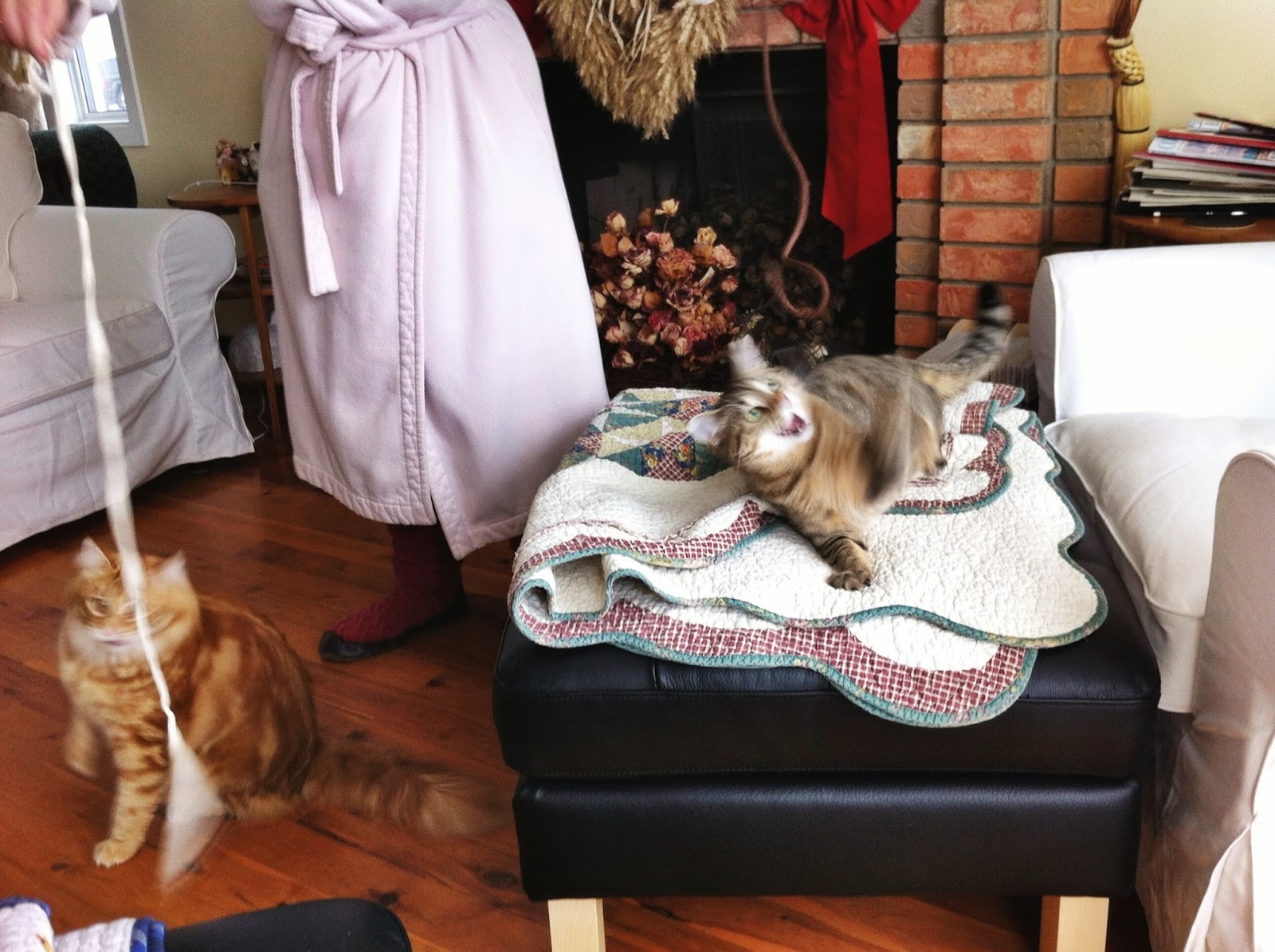 Then later they ganged up on me. No room for a laptop in that lap. 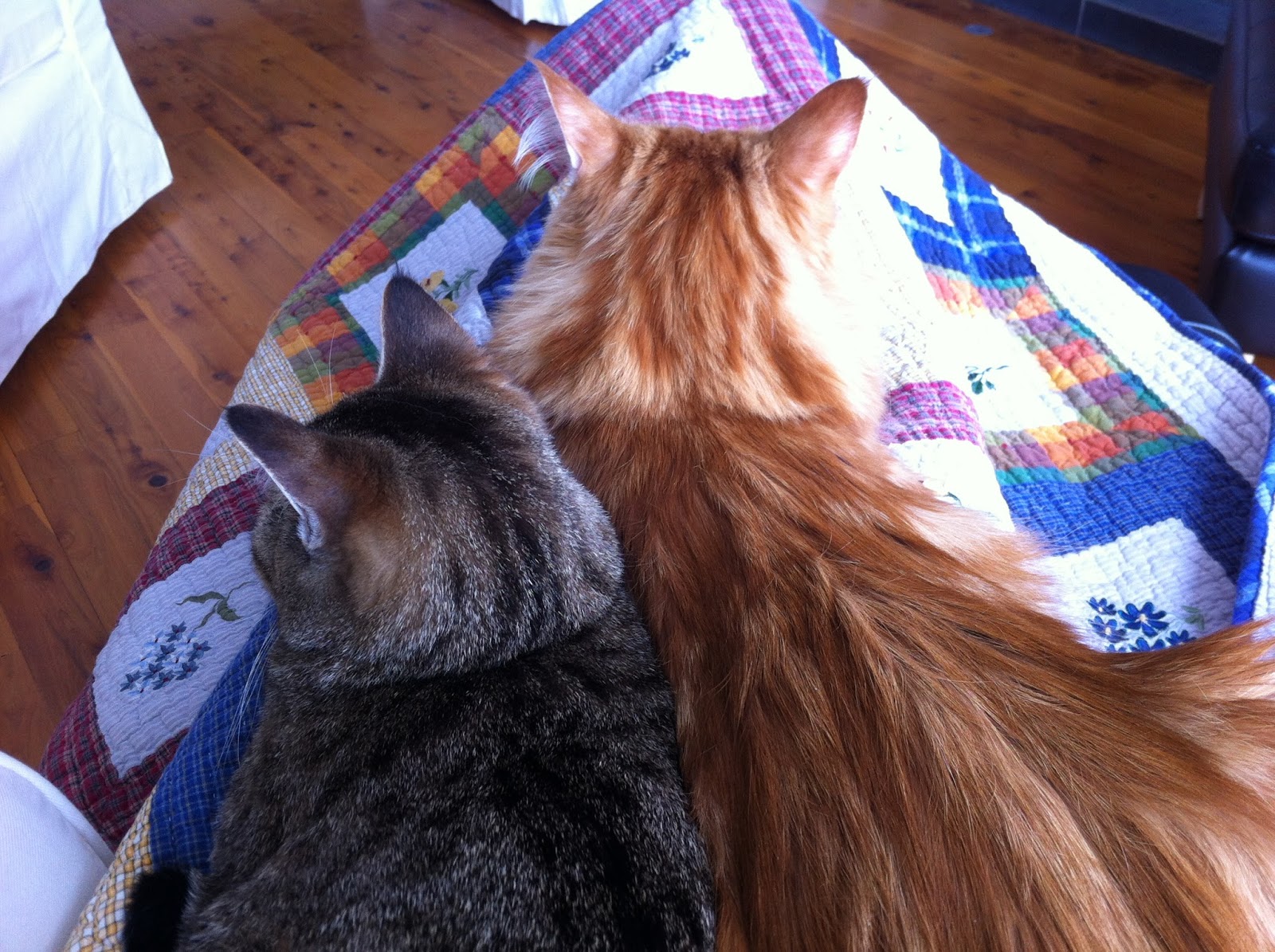 Still, it wasn't a total loss. Some actual writing got done, 850 words. Most drivel as I write myself into the scene, but that's ok. If I didn't write some drivel there'd be nothing to edit later, and we can't have that, can we?

The Saturday run felt really good. Then Sunday I was sitting most of the day, and I could feel it in my low back a bit. Then swimming on Monday, and I could feel the tug in my low back during flip turns. Water ran with Katie for 20 minutes, then 20 minute swim. She is such a champ. Most people would be prostrate if they were feeling that bad, but there she was, churning away hard at the training. Then sitting in my chair at work. So first thing when I got home I marched downstairs and did some stretching, and feel much better.

I started rolling The Stick lightly on the inside of my thigh starting at the knee and rolling up and down. My whole quad started to tingle, all over, all at once. Generally I start with light rolling up and down fairly quickly, then gradually slow down and start putting some effort into the sore spots. The ball and the drier ball thingie for my feet. I find I don't use the big foam roller much anymore, other than to support my knee when using The Stick on my legs. Oh, I use it to support my hips for feet in the air. I don't have a wall, so this is the best I can do. I should do some core stuff too, but supper was calling.

I've seen pictures of a big orange roller with whacking great huge spikes on it. Does that work? What rolling do you do, and using which tools? How long for each muscle? Stretch before or after the rolling? Tell me all about it!