But first, a bunch of you missed yesterday, with one of the best shots ever of Curtis. Just so you know, I'm already working on a glass of wine after a really good shower that I needed really badly.

Let's start with this. Any ideas what it is? It used to be stacked under the back overhang, and in the next photo, it's neatly piled in the garage. There are 83 pieces. It's day will come soon. 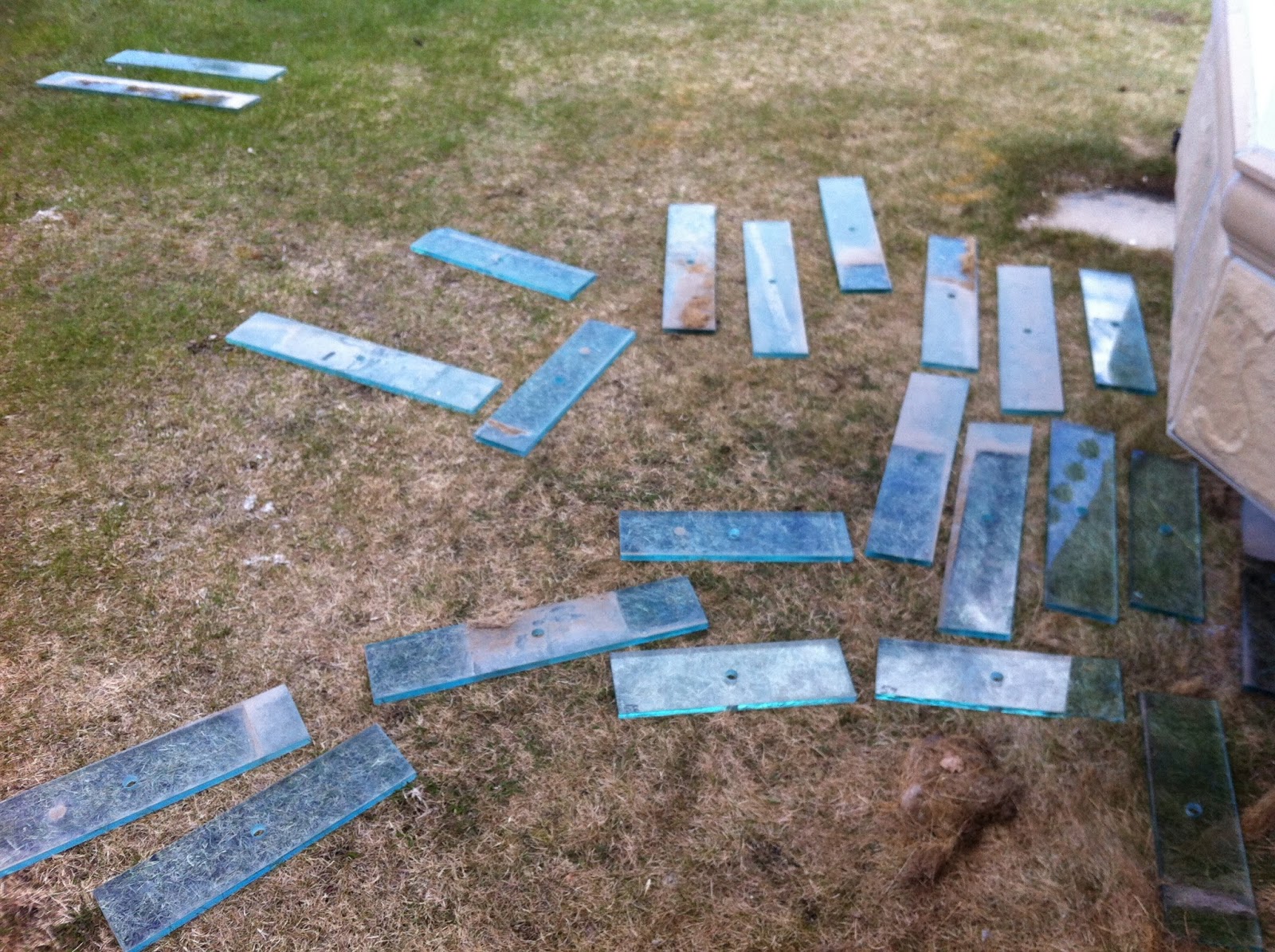 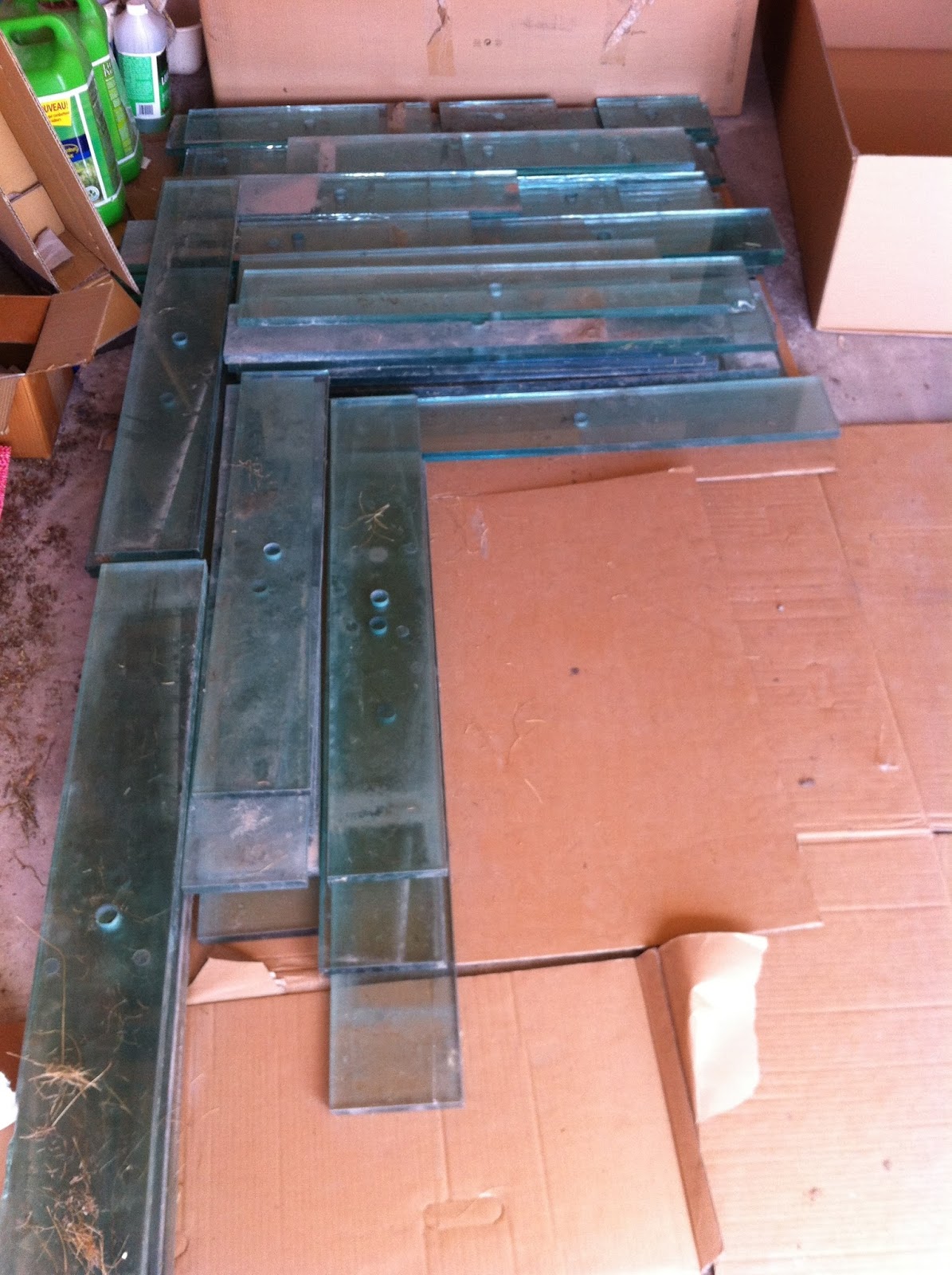 All that glass weighs a lot. Probably about 500 pounds worth. Pulling it out from the overhang meant being down on my hands and knees to pull it out carefully, then pick it up and carry it to the garage. The small pieces are no problem, being only a few inches long. But the biggest piece is about 4 feet long, and needs careful carrying. I didn't cut myself. I know that makes some of you happy.

Some of you may remember those big bumps of snow in the back yard. Those were a pair of big round composters that didn't work very well, at least for us. I moved them out to the front yard beside the street, and made up my own little sign. 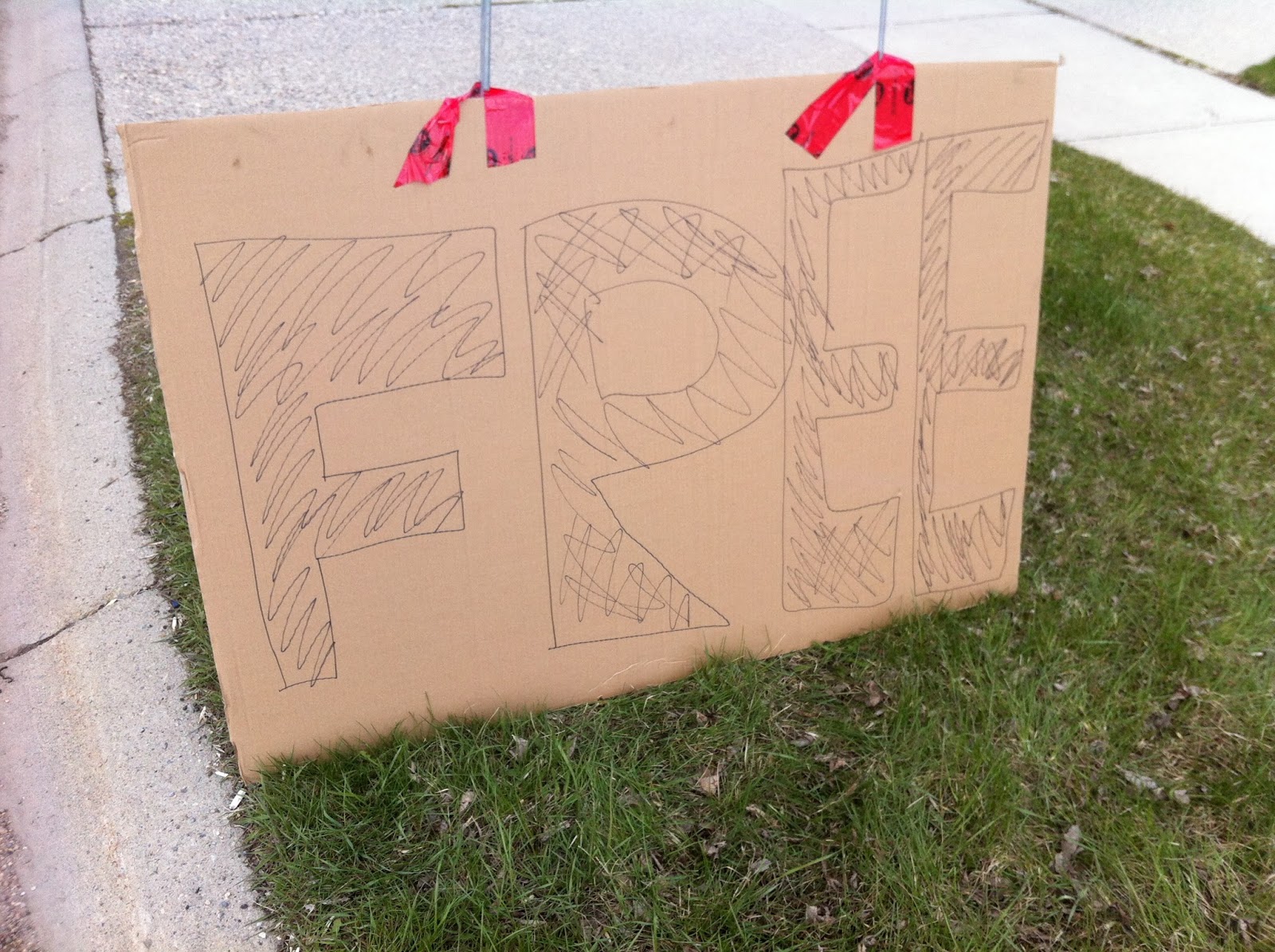 I was just taping the sign to the metal supports when a woman driving a mini-van hung a U-ie. "Are those composters, and are they really free?" Upon being assured they were, she loaded one into the van, and asked me to hold the other for a few minutes. She lives behind the 7-11 and was back in less than 5 minutes. A few minutes later a guy in a big truck stopped to ask what was free. I hadn't even had a chance to take the sign down. As the next batch of stuff comes up, you can bet my lucky sign will make another appearance. People love free stuff almost as much as I like it out of my face.

Here's the pile of garbage the landscaping crew will take away. We aren't going to miss any of it, or the back yard such as it is. I think our neighbors are going to be happy too. 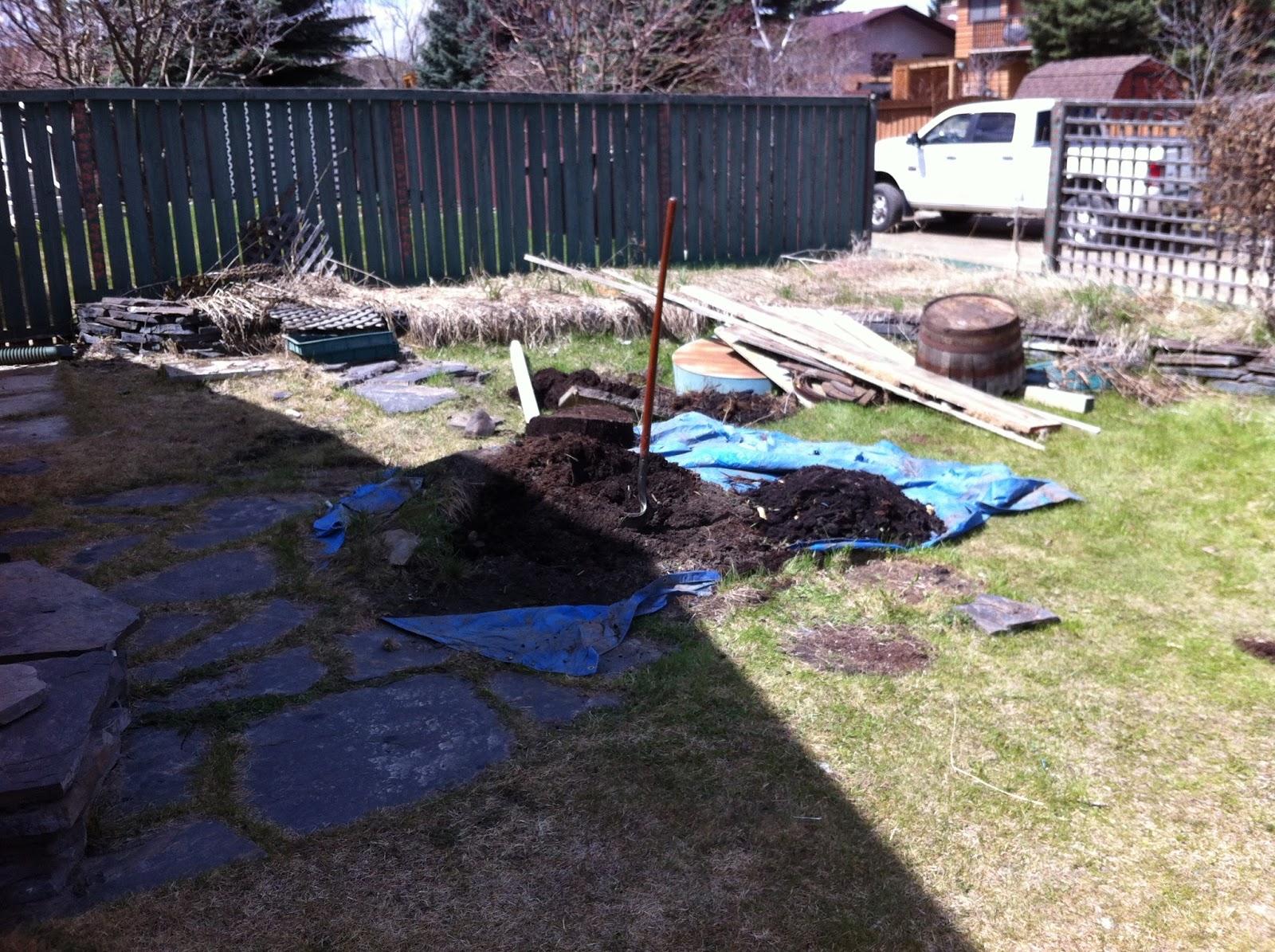 Meanwhile, the day started early, before the dew was off the grass even. Pulling apart the composters. Emptying the one that does work that we want to keep. Wheeling dirt up to the front to top up the flower boxes that Linda was working on. She planted 80 lilies! Transplanted 2 Climatus plants that had taken over the back fence. Generally did some flower box spring clean up. Check out the great posture! 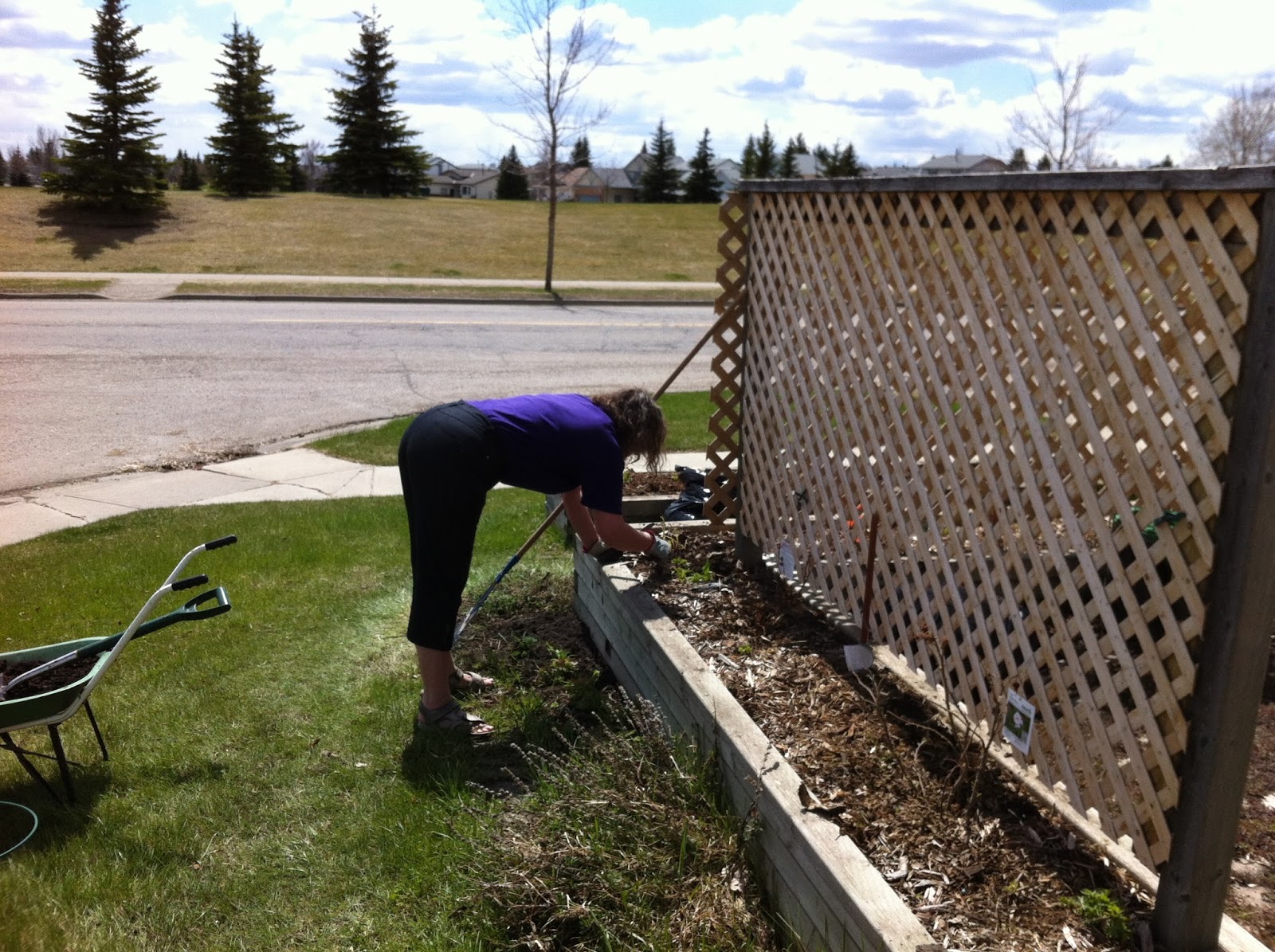 Some of the sidewalk slabs between us and our neighbor have sunk quite a bit over the years, so I was using up some of the gravel left from something else to build them up. We will have to see what happens when the crew gets in there working on the fence. Perhaps we will spring for a few extra $ to have them pick them all up, add more gravel, put them back, and top up with some more of the crushed brick that is already there.

Once upon quite a while ago now I built up the back steps with some black slate. I should have robbed a bank or committed some nefarious crime, since I'd worn off my fingerprints entirely. The pile of stone is held down by the top rock. It weighs a little over 500 pounds. Every spring I walk on it a bit and see what the winter has done. Usually I have to wedge a few stone slivers here and there, or kick a few rocks in. It doesn't move much. Except when the guy installed the stone tile they had to move things a little bit to get the room they needed. I really need to spend part of a day on that to put things back in and rebuild it, but didn't get the time. Stupid snow.

Some of my buddies went for a run today, and good for them. I'd sort of been thinking about doing that to warm up, then yard work. A bit of a systems check soon fixed that delusional line of thinking. I was still creaky from the work yesterday. The snow last weekend used up all our extra time, and the yard work HAD to happen to be ready for the crew.

A run is optional. At this point I've decided that the half marathon is strictly a training run, and that a full marathon in October is my A race. That gives me all summer to train. Which I'll need. In between glasses of wine in the new backyard, which will be so awesome that we expect many guests wanting to check it out and slurp some of my wine. As long as they bring food...

Let's finish off with another Curtis shot. 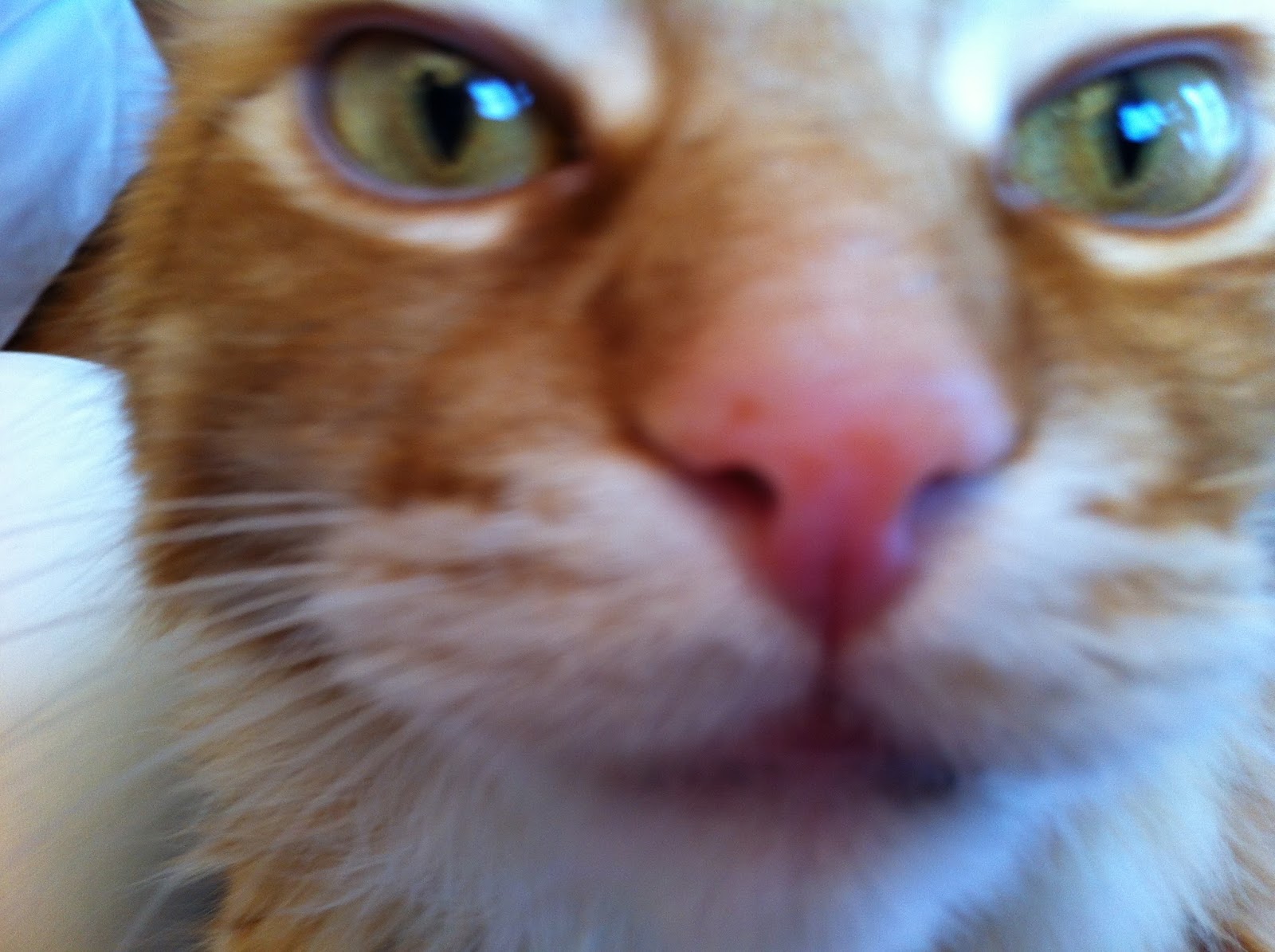