This has been a tough choice. The first half of the month was really busy and I didn't get out as much as I would have liked. The best photos I took were on a client shoot, and thus not really in the running for image of the month. I guess that's the way to have it though.
The other was a photo shoot where the photographer generously let me tag along. I got some very nice B roll shot of my new buddy, the makeup artist who I'd love to use on some of my own shoots, doing her thing, and some of the model as well. She was beautiful, was beautifully made up, we had great light in a lovely setting, so how could the photos not be great? Except, someone paid for that shoot, and I don't feel right about sharing those photos. I did one on instagram and tagged the make up artist, the photographer, and the videographer.
What's left doesn't leave me a lot of choice. As I write this, there is still Tuesday and Wednesday to get that image of the month. Hmmm. I was out for one of the days, and got some nice shots, but the best part of the day was chatting with a photo-buddy I haven't seen for a while. Still, there's a couple of new shots for you.
Second Runner up
I'm still fascinated by plants. Not just the pretty blooms that most people shoot, but everything right from poking out of the ground, to decaying back into the ground. 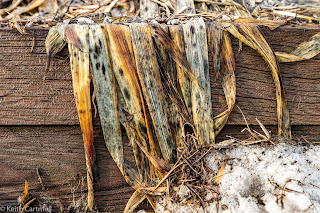 First Runner up
This is Ally from Savage Makeup working on the model. I think its a great illustration of how eyes make or break the portrait. 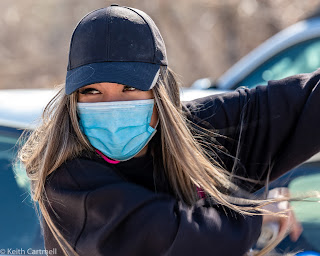 Image of the Month
Somehow, I keep coming back to this one. Yeah, I know. A back alley. Garbage containers. BUT! Icy ripply reflections. Nice light. 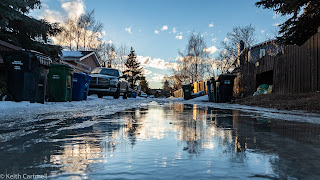