So Tuesday I found out that one of my co-workers has been exposed to COVID. He had been coming back from a fly-in worksite, and someone there has tested positive. He's self quarantining, and there's some concern he was exposed to one of the new variants. Our team is all working remotely, but he's shifted to another part of the project supporting a turnaround, and that means being on site. I don't know how this is going to affect the turnaround. It can't be good, that's all I'll say.
I was reading about how they've documented one case of a variant that came in from out of province, has led to 35 cases, including several in ICU and one has died. The variants are much more infectious, and pack as big or a bigger punch than the original.
Yesterday the province just announced we are back to stage one restrictions again. All the hard work over the winter has been undone. I heard about it in our community association board meeting. Our MLA usually shows up and she shared the unhappy news. The only good news is that lots more vaccine is arriving, and as of today Linda and I are eligible to sign up. People have told me a variety of stories about the difficulties involved, ranging from days of busy signals, to walking in for something else, and getting the shot because someone didn't show. No idea how this will turn out for us, but it is our intention to get the shot.
The renewed restrictions might lead to lineups outside stores again, with some poor sod controlling entry. That can't be fun, especially here in Alberta, with some people holding strong opinions about their outsized sense of self-importance. Here and I was just getting used to going back to the library again.
As a community association board we are trying to follow the guidelines as best we can, but there are a lot of grey areas. I get that it's hard to make province-wide rules, and there are always some who have at least some reason to consider themselves an exception to the rules for whatever reason. Yoga, for example, is included as a fitness activity, which it is. Except that it doesn't typically involve a lot of heavy breathing or sweat getting flung all around. It's easy to limit attendance. Linda's yoga instructor is reaching the end of her rope and might have to close the studio permanently. There's going to be a lot of that over the coming year.
We've been having great weather lately, with plants coming up everywhere in the beds. Linda is worried about more winter happening, since there isn't much that can be done to protect the plants from the overnight cold. The green netting is going on to protect the tulips from the marauding gangs of voracious bunnies. 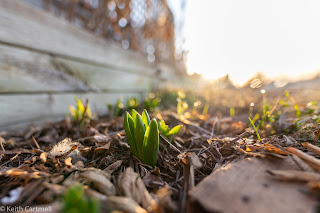 I'm thinking I'll get my bike down from storage, pump up the tires, and go for a ride. We see lots of people out for a ride, while we're doing our daily walk. One of the many projects I was going to do over the COVID restrictions was to build a camera holding basket on the handlebars. Yeah, just like so many other projects, it didn't happen. Maybe during the new restrictions. (And if you believe that...)
This is what our daily walk usually looks like from my perspective. Recently we are doing about 7 Km a day, mostly up the 37 St bike path towards the reservoir. It's almost exactly 10 K up to 90th ave, over to Southland, and back again. Sometimes we go south to 130 Ave. There will be lots of sound wall construction happening over the next several months. 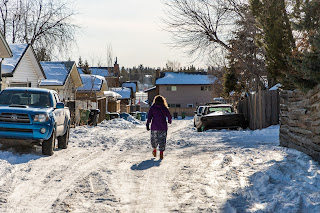 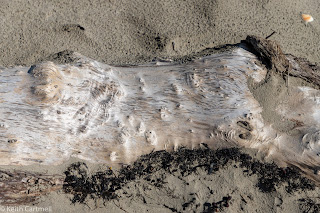 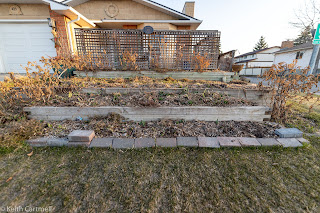