Of course, part of that was having an evening of lovely light on a beautiful and photogenic model, with her earning 23 4 star photos, and 5 5 star photos. I'm not about to go through day by day, but I suspect that's one of my best days ever in terms of photograph quality.

I've noticed in the past that good shots seem to come in bunches. You get in the groove, and even subjects that might be ordinary get caught just right. Find the right subjects, or the right light, and a good composition, and you'll get good photos. Get all three together and it's magic. And non-photographers wonder why their photographer buddy is so intently focused on something.

So picture me this morning, sipping coffee, discouraging Curtis from trying to help me eat my breakfast, and scrolling through beautiful photos. I was already sure that the photos of Michelle were going to set the standard for Image of the Month, and just as a hint, are currently setting the standard for Image of the Year. But the tulips, by golly! They were trying hard. The orange ones light up in the morning sun like molten glass. One particular pink and white one was just exquisite in any light. Some of the other tulips were amenable to me trying new and hopefully interesting shots.

The garden is almost always a fruitful place to look for photos, though sometimes I have to look hard. Other times I grab the camera and run. Like this morning. I realized the morning light was on the new begonias, and there was, changing lenses and trying not to trample the cats on the way outside. 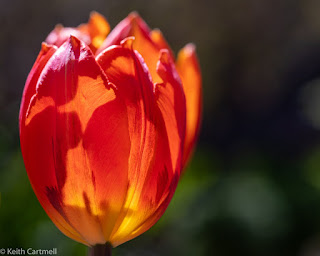 First Runner Up
The idea for this one came in a flash. I wasn't sure what shooting into the setting sun would do. I thought it might light up the hat like a halo. The settings were tricky, but worth it. 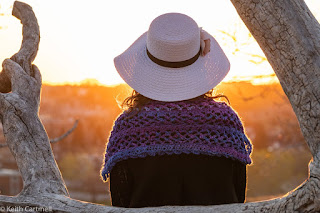 Image of the Month
If you missed the blog where this originally showed up, this one is special. We'd been out in fabulous evening light having fun with the shoot. Now it was getting into twilight in a great location, with that amazing backdrop. We had some usual portrait shots and then started to play with some of the tiny lights she brought. The original idea was to use a candle, but we were experimenting with a string of fairy lights. She is a cancer survivor, and it has touched other parts of her life. One of the reasons for doing this shoot was to get a nice photo of her to use as part of the Melanoma Awareness campaign.

I wanted to capture a moment of quiet contemplation, candlelight reflected in her eyes, yet showing the determination to carry on. To have this shot come to fruition pleases me enormously. Thank you Michelle! 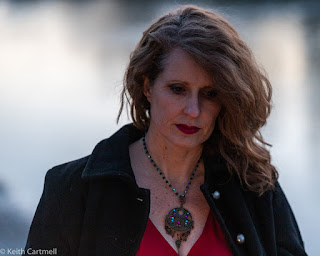