Often you don't get a second chance at a shot in photography. The moment, the light, the scene is there and then it's gone forever. And you wondered why photographers are obsessed by light, and being there at the right moment ready to go.

Lately I've been shooting lots of driftwood, trying to find pleasing compositions. It's interesting to me, at least, and if you aren't interested, oh well. Some driftwood wouldn't change much day to day. It sits there above the high tide line, slowly decomposing in the sun. Maybe someone comes along and uses it for beach art.

Some driftwood is still in the water part of the time. The look of a photo of that could change second to second. Other driftwood might change day to day, depending on tides, the light, and the vagaries of the passing humans.

Lots of times I have to wander around some driftwood, looking for the composition. It's not always there and I move on. I have the suspicion that a better photographer than me could find interesting compositions that I don't see. Sometimes I'll find something interesting I didn't notice at first. Sometimes I'm not sure and I'll take the best shot I can, but when I see it on screen I say meh. Some compositions are so striking there is no doubt about which way to shoot it.

A bit of a digression now. One of the so called photography rules is that you only ever show your best shots. People (hopefully) go ooh and ahh, and think you're a genius, mainly because they don't see the hundreds and hundreds of not quite right (at best) shots, and the many thousands that are instant deletes.

So there I was, seeing a shot, and struggling with it. Well, struggling with the image of it. The rocks and wood were quite happy. My first go at it showed me the potential was there, I just hadn't been alert enough to capture it. The problem was depth of field. Picture two rocks in line, with a wood background behind them. Other stuff too, but start there. For this, everything needs to be in focus. I knew I was struggling with it at the time, and took 3 shots, thinking I might be able to merge them into one shot. When I looked at the individual shots, each worked out the way I thought. The problem was they didn't merge. Oops.

I knew I could go back there the next day, and hoped I'd get another chance. I was fortunate, I did, but the lesson I learned is that I really need to be on the ball for this stuff. Get it right the first time. This is one of the differences between a pro and an enthusiast. A pro would have realized the problem, and fixed it the first time. I had to see it on screen and think about it.

When I got there I got the shot I wanted, then shot a pair of surfers for a while, then went back yet again to get another shot. And another. Yes, those are all the same rocks. 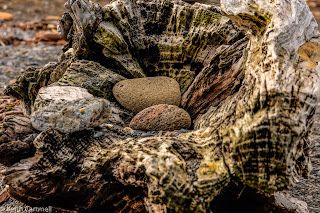 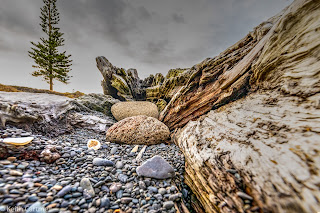 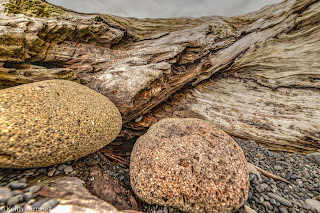 This is the thing about photography. Sometimes you get on a roll and you get a bunch of nice shots in a row. The only downside of these photos is that the light was nothing special. But then, given the orientation of the log, I'm not sure what would create extraordinary light on the two stones unless I brought lighting. And that's against my rules for driftwood. Remember, as found.