We drove past these any number of times before stopping to check them out. There are two big vertical pipes in each, one about 2 m in diameter, the other much smaller. 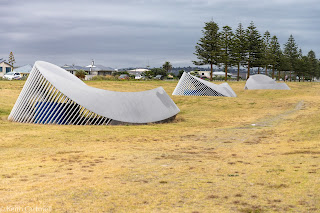 I had assumed that the pipes were left over infrastructure from some old industrial site, and the sculpture was a cheap way to disguise them and prevent any danger to beach users.

They turn out to be stormwater outlets. When there's enough of a flood, 3 big pumps sequentially start and pump lots of water. The three outlets are in a bit of a depression that fills with water, then it gradually flows over a sill to the ocean, and some is absorbed into the coarse gravel. Beats flooding homes and businesses.

This rectangular outlet is a smaller version of the same thing for smaller flows of water. I would not want to be walking just there when the pump starts. 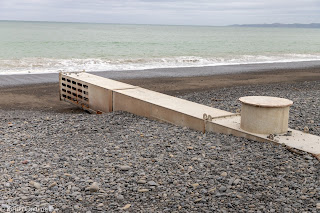 Then there's these, quite nearby. 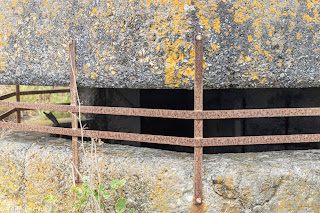 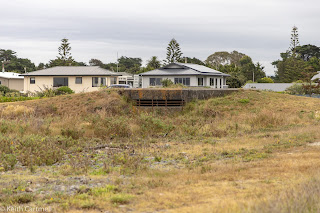 As you might suspect, these are old costal defense strong points. They tried destroying some of them, but it was surprisingly difficult and expensive. Duh! They were designed to be functional under naval bombardment, so you'd expect them to be durable. Most of them just get buried to confound future developers. Out of sight, out of mind. 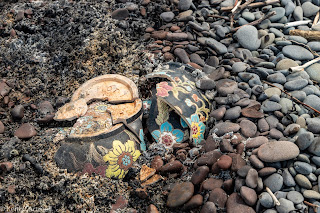 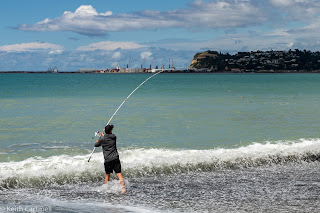 Why is that odd? Because I've never taken a photo of a guy fishing before. That's good enough for me to call odd.

In other news, it was a quiet day today. A very nice farmer's market. A stroll on two different nearby beaches. Shingle beaches, so lose the thought of golden sand and Linda marching for the clothing optional section. A lovely seafood dinner.