Over the past several weeks I've been shooting the new Sigma 14 mm lens almost exclusively. It's a lot different than all my other lenses. One has to pay a lot of attention to the edges of the frame, and keeping the camera as close to level as possible. Plus it sees stuff that is almost beside me when I'm shooting. It's changed a lot of my thoughts about composition.

On a private Facebook page one of my photographer buddies was talking about her new 150-600 mm lens and asked for advice. Since I love giving advice, I shared. That got me to thinking, I hadn't shot mine for a little while, so lets go do that. It isn't as heavy as I remembered.

I did a couple pedestrian bridges, then down into Fish Creek, for nearly 300 photos. Many of them are near duplicates, of course. One of the tricks for such a long lens when shooting hand held is to take several shots at once. That way you're likely to get at least one nice one.

As a digression, for a while I was running low on current photos for the blog. After a night out with Sean shooting the belt line murals, and my day with the long lens I've got lots to share with you. I'll spread it out a bit so as to not overdose you.

Starting with wide.
I've been seeing these green bikes everywhere, but this was the first time I've had a camera in hand. I like how the light is working with that green, but I think I'll have another go next time I'm out. 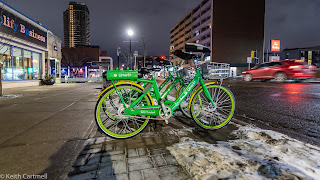 On to the murals.

The artist is Natalie Nehlawi (website) and this is only part of the delightful mural. Darn that couple that parked a car just out of frame to the right! Sean and I had a nice evening scouting out the locations, and coping with the challenges of photographing them. Lots have signs (mainly no parking) or power lines, and glare issues from artificial lighting to complicate things. 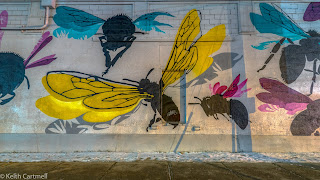 The artist is Curtis Van Charles Sorenson (website) and this is one that suffered from glare coming from the big advertising sign nearby. That explains the slanted perspective, otherwise the glare is right in the cat's face, even using HDR tricks. Sean and I were discussing that early morning on a hazy day, after the sign light is off might be a better time to photograph it. 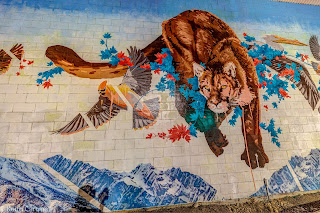 The artist is Kalum Teke Dan, with Colouring it Forward given as the (website). Here's his personal website. Pity about the car, and the glare from the restaurant. I'd like to have another go at this one in different light. 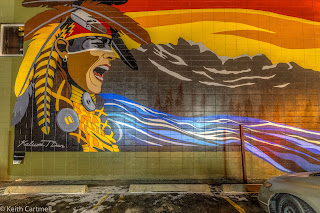 There are about 18 murals, and it's well worth a stroll to see them all. The map here is a guide, but Sean and I had to scout around a bit to find them. Plus he knew of one by the Rose and Crown that wasn't mentioned. In an update, you can see Sean's photos here.

Now to long. Getting warmed up. This is a case of the photo looking better than reality, mainly because the zoom lens compresses the scene. Downtown looks like it's just over the hill, but no. It's clear where I shot it from. 300 mm hand held. 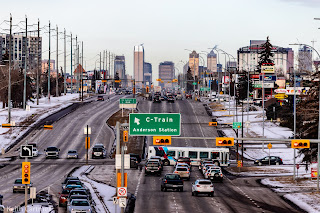 Bridge 8. I don't think this is an especially attractive bridge, but it's looking pretty good here. 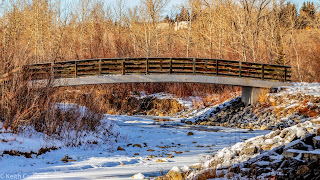 Three rocks in a frozen creek. I hope you can see the different textures in the ice. 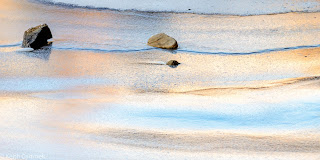 A vegetative art shot for you 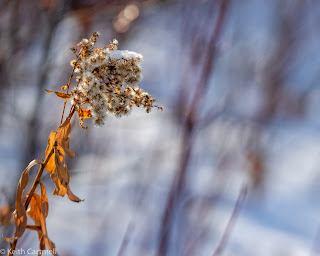