Tuesday was photo stuff. You may recall I'd taken a great many photos at the Chaparral triathlon. I finally got together with my victims I mean subjects. I was happy to discover they liked 58 of them enough to tweak them in Lightroom, and send the resulting jpg to them. I'm part way through doing the processing. The big step will be cleaning all the stuff out of my dropbox so I can put the folder there for them.

Here is the difficulty. Curtis not only insists on 'helping' me work on the novel, he also wants to 'help' with editing photos. Such a talented kitty. 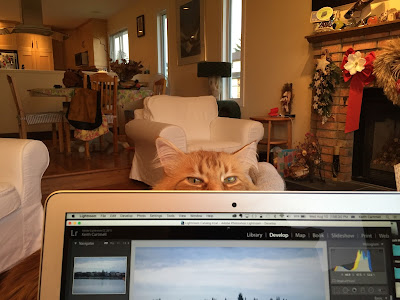 Along the way I sent a photo of a smiling buddy to her by posting it on her Facebook wall. Holy doodle she is a popular girl! About 200 likes later the torrent in my notifications thingie subsided. I sent her a couple wetsuit shots, and yes she both looks good and swims like a torpedo in it, and she got a bunch of Instagram likes.

Then there was a run on Wednesday. I wasn't looking forward to it. My legs have been grumbling since Saturday's run. Even with the mostly subsided grumbles, and the threatening clouds, and the weather statement about the weak funnel clouds, I was hopeful enough to head out. There's lots of runs and bikes and swims where I've started feeling crappy, and ended up having a good workout. I ain't made of sugar so the minor sprinkle didn't bother me. I was home about a minute before a torrential downpour. That wouldn't have been fun.

So 2 k warmup, 14 min. This was about what I expected. A bit clunky, not finding the groove, but gradually feeling better.
6K tempo tracked as 3 x 2K, 39:49 overall. This surprised me. As soon as I picked up the pace my legs were happier and I ran better. These were pretty consistent, 6:36, 6:38 and 6:41 pace per K over each of the 2 K segments. Breathing was fine. My legs didn't want to go any faster, but would have gone further. This actually felt pretty good, better than I had expected.
2K cool down, 16 min. One advantage of the iPhone is the little emoticons, namely the turd one. The cool down was dreadfully actively horrible. My legs felt like they wanted to fall off. I'm pretty sure I could walk faster than I was "running". That was a struggle to finish.

Thursday is an hour water running and a bit of water core after. Plus the hot tub! Yay! Hung out in that for a while.

I spent some time during lunch trying to get a grip on my schedule for When Words Collide this weekend. So far the schedule looks like this, plus more on Sunday. 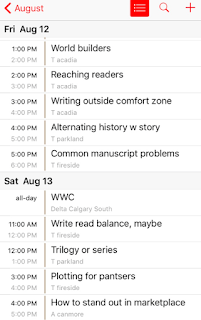 And then there's a 22 K run this weekend. Alone. I was figuring out what time the first bit of programming I wanted to attend on Saturday started, and it turns out to be 11 am. I figure 22 K will take about 2.5 hours. Anyone want to be my run buddy, starting about 7am? Not sure where yet. Hmmm, 22 K will almost get me from Anderson, around the res, and back. Or if I do loops around the neighbourhood I won't have to carry anything, just leave water and snacks in the front patio, and treat it like a pit stop. Hmmm. Plus a bathroom. I think that's the decider.