Once upon a time I got on my bike, this was long before Estela, and from home rode all around the reservoir and back. It was an epic journey for me. The hills were like cliffs and were higher than the Cliffs of Insanity. It took a really long time. The route looks like this now, and was slightly different back in the day. 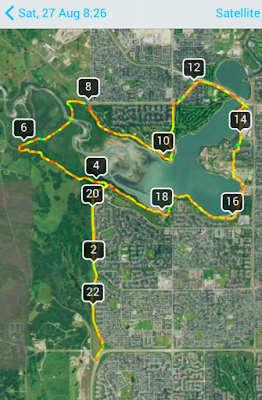 Gradually I got faster, but it was always a big ride for me. Then I got Estela and discovered the hills weren't really that big and trying to ride her along that route at speed was not a good idea. Somewhere along the way I actually ran around the reservoir for the first time.

Today was a run from home, around the reservoir, and back to home. There was a walk before and after. 22 K, 2:42:49 run time, 7:24/K pace. I only remembered after I was supposed to negative split the distance, but I was pretty tired the last few K and couldn't have pushed much harder. The first 11 K was 1:20:14, so I was just over 2 minutes slower. Oh well.

I was working really hard to get last Wed run out of my head and succeeded. I didn't run or swim Thursday or Friday, and went to bed early both nights. Today I felt a bit tired going in, took a K or so to find a pace, and settled in fairly even, hills slowing us down a bit.  Although we passed a couple of people on the way up to North Glenmore. (Yay us!) We stopped for a bio break in North Glenmore, and I checked out a possible photo vantage point (nope), but otherwise it was a steady run. Well, aside from the third first. (keep reading.)

So I'm pretty pleased, in case you hadn't noticed! First time I've done this route as a run. (first first.)

Yesterday I got some good news I can't talk about yet. Soon. Afterward I was shopping through MEC and picked out a hydration pack. Usually for long runs I put a little aid station on the front porch and do loops, but this time we were talking about doing a long point to point run down in Fish Creek. What with one thing and another we decided not to, and went around the reservoir instead. I didn't want to try to carry everything in pockets, so pack it was. 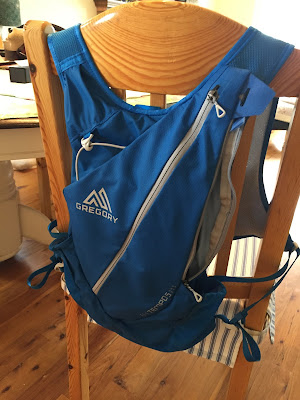 It has lots of pockets, including a pocket in a pocket which is always neat. 2 L capacity, which seems about right. One of the pockets is waterproof and my phone fits in it, so that's good. It fit comfortably right from the start, and once Michelle showed me the trick of getting all the air out of the bladder, I was good to go. (I had a whole bunch of bladder jokes going through my mind during the run for inclusion in the blog, but I'm over that now.) I'm really pleased with how it worked out. No shifting around, no chafing. (second first.)

I know that some of my readers have their special run buddy, but sorry guys, I have the best one in the world. Really! We've run together in cold and hot, rain and dry, chatting about everything under the sun. But today was a first, showing that special bond of trust between long time run buddies. She trusted me to gently dig around in some soft moist folds of skin, removing an irritant she couldn't quite deal with.

What's that you say? What??!! You perverts. We were on a public path, and her pants were on. I dug a bug out of her eye. You guys! Sheesh. Anyways, that was the third first. All in one run! We even saw some friends heading into Heritage park, and chatted very briefly.

It was a nice run, legs feeling pretty good, even toward the end. They were tired of course, especially hip flexors, but we chugged along. Long walk afterward checking out the new pedestrian bridge. Showered, nibbled some cold pizza, and the cats graciously gave me a recovery purr on the quads. Such a sleepy little face. 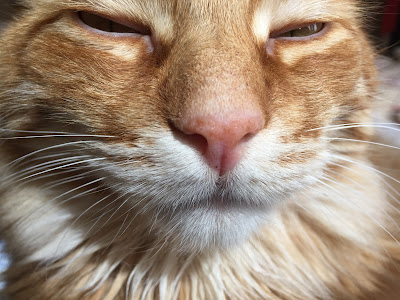 Hope the weather holds for a photo walk with the famous Neil Zeller tonight.