She who spanks bison

Tuesday was a short swim, about a K all up, mostly nice and easy, feeling pretty good.

Tonight was the first interval run in the marathon training program. It leads to an interesting graph. 3K warm up, 10 x(1 min FAST, 1 min recovery) 3 K cool down. The fast ones didn't all get faster, but they were quicker than I thought they'd be with my feet feeling heavy and tired. 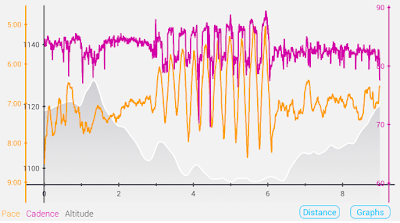 What was interesting was programing iSmoothrun to talk me through it so I wouldn't have to remember which interval I was on. That made life so much easier, I just did what it said.

Once upon a time I was called the cow whisperer. Read about it here.

Just south of here on the Road to Nepal there have occasionally been bison grazing on the other side of a very flimsy fence. Grazing implies bucolic. Nothing could be further from the bucolic truth than a grazing bison, especially a suspicious mama bison. Did I mention the flimsy fence, and the massive stink eye that had my liver shifting in my chest as I rode past? I would never dream of spanking a bison.

Linda is made of sterner stuff. While I was getting ready to run, she was hard at it, dominating the bison. Molding it to her will. Spanking the recalcitrance. 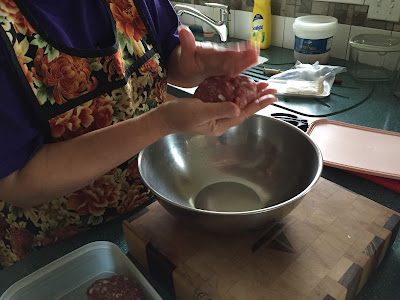 After the run was over I had no trouble barbecuing the repressed bison. It was tasty.