Some of you know I've lived most of my life in Calgary, having moved here as a feckless youth in 1980. The city was very different then. I've just spent a happy hour looking at city photos from various eras.

My first thought was to try to find photos similar to the ones below for comparison, but that didn't work out so well. Once you start looking at photos from much before mid-70's or so, it gets difficult to figure out what you're looking at, or where exactly it was shot from.  The Calgary tower looms over everything for a while after it was built in 1968.

It's been exciting, watching the crane-birds arrive, hatch their buildings, then depart. The Calgary Tower gradually started looking shorter and shorter. Lots of times I'll look at a new building and wonder what was there before? Sometimes I know, but not often.

Calgary is blessed with a hilly topography that can offer surprising views. Some are very popular, such as where I shot the north view. Others are less popular for whatever reason. My Friday night was to scope out a couple new locations and see how they work out. I'm pretty pleased with the locations. These photos are tweaked slightly in Lightroom. I've still lots to learn.

I'm under no illusions about these photos. The vantage points are public property, and probably almost every landscape photographer in town has been to them. Almost all of them have probably produced better photos, but that's ok. Just like writers have to get the first million words of shite out of their system, photographers have to produce some number of poor photos as they learn. It will be interesting to see my photos from these same vantage points a year or a decade from now.

From the west, earlier in the evening. You saw one similar to this the other day. No trouble finding the Calgary Tower here. It really is shorter than some of those buildings, but the perspective is tricky. It's also the furthest away. 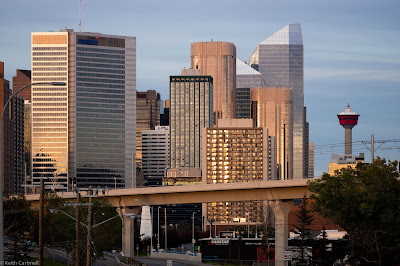 This is from north of downtown, up on the bluff. These are currently the 3 tallest buildings in Calgary. Can you see the Calgary Tower? The top is just visible to the left of the Suncor building, which some of you might remember as Petro-Canada. 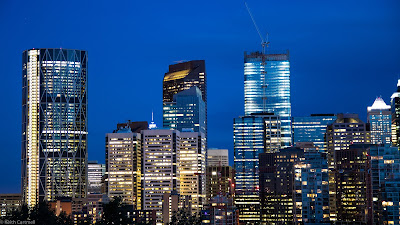 Here it is from the south, a bit later at night. Lots of LED lights were installed on the Calgary Tower for a variety of effects. What it does is mess up long night exposures! 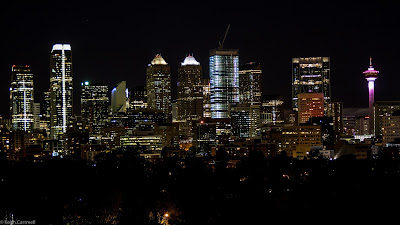 I've actually looked down at the Calgary Tower from a building. A buddy of mine had an office on the top floor of the then Petro-Canada building (or Red Square for those of a certain vintage) for a while, and we went in on a Saturday to work on some paperwork. Of course I took the time to stroll around the whole floor checking out the view. Now, if only I can get my buddy that works in the Bow to invite me for coffee...

It isn't just the office buildings that are getting taller. The condo buildings are getting pretty tall too. Here's a few of them. 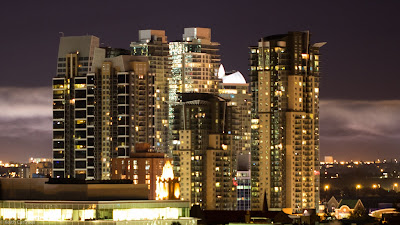 Next on my list are a bunch of new buildings going up in the Beltline. Stay tuned.

Email ThisBlogThis!Share to TwitterShare to FacebookShare to Pinterest
Labels: Canon