If this is retirement, bring it on!

Thursday, water ran an hour, doing slightly different variations. The straight-legged one with toes pointing up is tough. Remember, no float belt. Short work day, with people bringing stuff for me to do, and me frantically trying to prod Maximo into doing it before I had to leave. For a super-duper program it's awfully slow.

I've been meaning to get out onto Estela again. I had some rides early in the year, then I started focussing on the run, and we had all that crappy weather. But today was the day! 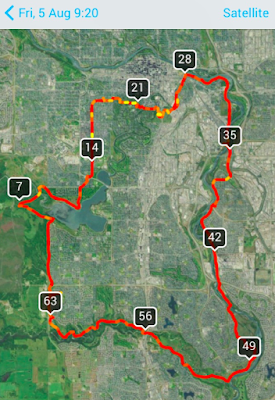 I'd been thinking of scouting some photo locations, and decided to work that into my bike ride. Turned out to be 65 K in 3:14 mostly just riding along. Lots of stops along the way to enjoy the scenery. Here's one of them, I think we all know where this is, plus the most photogenic bike ever! 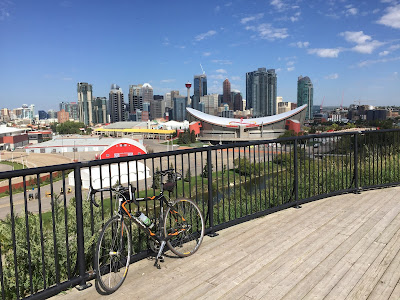 It worked out pretty well, but I goofed on hydration and nutrition. I figured I was only going a couple hours so I took only one water bottle. Shortly after that above shot I had to decide which way to go home. I could have gone down Elbow, or the Bow. I chose the latter knowing it was a longer ride. By 50 K was getting a bit hungry and if the ride ended then it would have been perfect. By 60 K I was out of water, getting hungry, and my legs and butt were getting tired.  Home to hydrate and a quick snack. Then Linda got home and we had a big lunch. 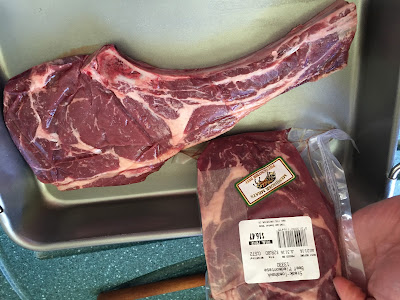 Stupid blogger, upside-downing that photo and not letting me fix it. Or maybe it's Apple's Photo whatever. Grrr. Sorry. 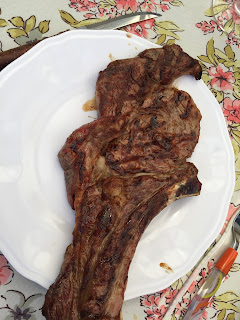 No, that isn't a little baby dessert plate. These are the tomahawk cut from the Italian Store. Pretty darn tasty! Yes other things were added to the plate.

After a big meal it's nice to torpor in the shady patio, then I went for a power nap.

My swim buddy graciously invited me to come along as her spotter for an open water swim. I was a bit unsure at first, then decided what the heck! The worst that would happen is I'd vomit from the exertion of trying to keep up, and I could swim away from that, and besides it would be a first experience. No doubt the lake has had worse. I try not to think about it when I'm swimming open water. We scoped out the swim exit and transition, then called it an evening.

Closer to sunset I zoomed out to one of the spots I'd scouted for a sunset shoot. BUGS! I'd forgotten about bug spray, and that detracted from the experience. I had a picture in my head of what the photos would turn out like, but I didn't quite get there based on what I've seen on the back of the camera. Later today I'll put the chip in the laptop and find out for sure what I've got.

From there I scouted for locations for the Perseid shoot. Holy cow Calgary is a bright city. My thinking was to go south a bit and try to find the lee side of a hill, but it didn't work out that way. The light bounces off all the dust and crap in the air.

Since I was there I tried anyways, then shot some of a distant lightning storm, then some stars off to the SW, since it was dark in that direction.  This is a learning experience so I don't expect much from any of these.

All in all an active happy day! I'm not sure I want to be that busy all the time, but there's lots to do and a limited time.