The marathon plan, and MCK explained

MCK is going to be my motto till October 22. That's the day I'm going to run a marathon. It's the last one of the MEC races of the season, starting at Telus Spark, running down to the Bow river and noodling through Inglewood, then west to Silver Springs and back. Mostly flat, with a big hill at the turnaround.

I consulted with Katie, who coached me through IMC 2010. She is so enthusiastic, and started researching a training plan for me. We met up for coffee to discuss it, and I took Michelle along, almost in self defense. I think Katie forgets how old I am, and she has boundless confidence about my ability to soak up training. I'm less sure. Michelle suggested a minor modification to the plan that just might save my ass.

As I knew she would, the words 'More Core Keith' came up. MCK. That's my motto for this training. Run my ass off, with some swim and biking for variety. Plus lots of core. Lots and lots of core. I need it. Weak and flabby, thy name is gut and butt. Make of it what you will.

Technically the plan starts tomorrow, with a rest day. Today I was out and ran 16 K along the ridge near Douglasdale. The view to the west and towards downtown is stunning. No wonder those people paid big bucks for those homes, and every one of them has a big deck to enjoy the view from.  Not that I saw anyone doing that. Maybe it gets old.

I've walked there a long time ago, before most of those homes were built. It's different now. Much of it is a very nice run, but the bit beside the golf course got hot coming and going. The intent was to run easy on the way out and a little faster on the way back. No matter what I did, I couldn't run much slower than 7 min/K on the way out. My breathing is easy, and my legs are happy. The way back was a bit harder, with a big steep hill at the bridge beside the Fish Creek plant that I walked. I don't think I negative split it, but it was pretty even so I didn't miss it by much.

My phone says it was about 20 C, so not too hot, but the sun was pretty fierce. I sprayed on a good layer of sunscreen. Technically this is the last non-training run. Thus far this year has all been building base. I'll find out how well I did in the next 12 weeks.

I've been looking forward to this 4 day weekend for a while. Yesterday started with the consultation over great coffee from Monogram. Then meeting up with some buddies to see Life of Pets, then tea and munchies after. The rest of the afternoon was taking it easy.

Linda has been tending her garden, and worrying about hail. We've been hailed on 4 times now. Once a year is more like it. Mostly it's been fairly light by Calgary standards, though the most recent bout was almost dime sized driven on a strong wind. These particular lilies have been through a lot this year. They were attacked by lily beetles, we don't think they like the soil, and the hail has been really hard on them in particular. Still, they're trying. See? 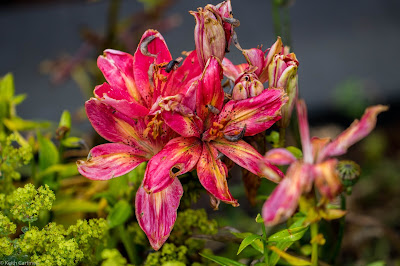 After my run I fired up the BBQ for bison burgers, then started writing my blog and editing some photos. Here's my support. 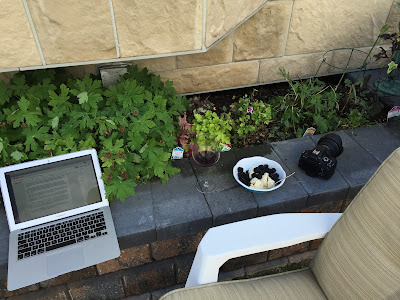 Laptop, wine, Madagascar vanilla ice cream with fresh BC blackberries, and the camera to take photos of the building thunderhead to the north. Or the garden. Here's my view the other way. 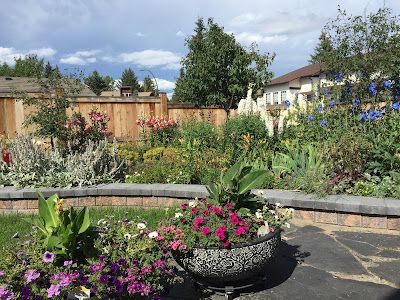 Some of you might know my boss hinted my contract will not be renewed at the end of August. I've heard this before. I don't know if he was expecting me to break down and beg for my job or what, but no. I've got things to do in September. August too, come to think of it, and the original plan was end of July. In any case, if it does end, I'm not broken up about it. It started May 2012 going till the end of the year with no idea about renewal. 5 or 6 renewals later, here I am, surviving the departure of almost everyone I knew.  There isn't any particular virtue in it, I think my particular skills lined up with what Penn West needed.

My retirement theory was that I'd look for interesting projects to work on. If one of those is a paid gig, so much the better. I figure a few months at my current hourly rate covers my average yearly expenses, so why should I work any more than that? Every year I do that, puts off drawing on my retirement savings another year.

Now, I drafted that plan back before the price of oil crashed. Lots of my buddies are looking for work, and telling me there isn't much. That's now. The Calgary and Alberta economy is a roller coaster. Sooner or later the price of oil will go back up. It has to. There is a limited supply of the stuff, and it's one of the most useful commodities around. Sooner or later demand will come back.

The question will be if I'm drooling on my shoes by then. That would be too long. But I've had nearly 5 years of work with only minimal vacation, so I'm not going to mind several months off, or even a year. If I'm thinking about doing Calgary 70.3, it would be nice to be not working till this time next year. What with photography, novel writing, the blog and working out, plus whatever trouble my buddies get me into, I expect I'll be busy.

For those people that might be thinking of hiring a guy like me, keep in mind I'm willing to talk about all sorts of projects, in oil and gas or not. A bit of advice is free, and even the paid stuff isn't too expensive and well worth it according to some people. There's all sorts of pies I've had my finger in, and I'm willing to taste others. But keep this in mind. I don't need any argy-bargy about working hours, and I'm not interested in monkey turning the crank entry work. I'm looking for interesting work requiring thought, and figuring stuff out. Building processes to get the best value out of software is fun. If you have any of that, get in touch. Remember, lots of my SQL statements start with WITH, not SELECT. Ask your data guru what that means.