Half marathon recovery has gone well enough that I ran today. I achieved a big goal at work and I rewarded myself with a mid morning run. The only problem is that I somehow turned on auto-pause for almost the entire run, or my phone lost track of the satellites. I figure it was 4 k, 26 minutes, feeling pretty good. Downtown must have got quite a bit of hail and rain. There were leaves and little branches all over the path near Stampede grounds, and technically, the path under Macleod Trail was closed because of high water. I ran there anyways. It was only a little damp.

I don't spend a lot of time concerned about my readership stats. This blog is to amuse me, and if it amuses others that's a nice bonus for them. I'm still surprised at what gets the readership. Sometimes I know. The NIMBYISM post got lots of retweets, and the issue hit the news. The followup had some retweets but didn't do anywhere near as well. The children of the canola got ONE, count'em ONE retweet, but that was enough to power it into 4th place for overall readership, and slowly inching towards third.

Stock at Large is by far the earliest post in the top 10, and I'm pleased to see it holding it's own. I know why, but I suspect many of you don't. Any guesses?

Once upon a time, "Boobs, a rant" was proudly the second most read post. Lately it's fallen out of the top 10 where it's harder to see readership. I'd mentioned it to one of my buddies, who was in shock they hadn't read it. There you go, happy early birthday.

I could wish Blogger was better about stats. I see page views for individual posts, and an overall page view number, but the latter is usually far bigger. Lately I think I've been hit on by bots that artificially inflate the count. I tried Google stats, or whatever it's called, but there's something I don't get about it.

So far it hasn't rained today. There's been a lot of that lately. My lawn is turning into a jungle, but it's still too wet to cut. The garden has had a little more hail, but seems to be doing ok. Here's a lily leaf hanging in there. 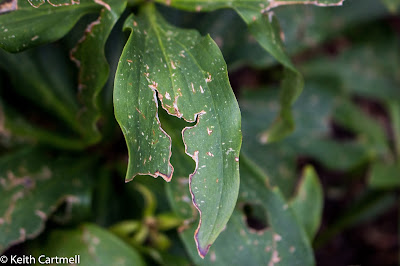 I like this contrast between the plant and two pots. 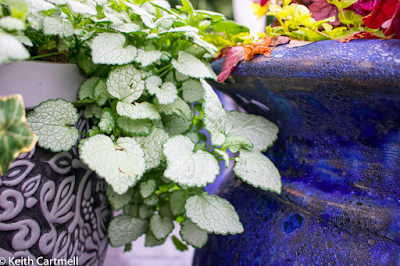 There's a tonne of photos I'm working on processing. Even though I knew the RAW format size was huge, I'm surprised how quickly it ate my laptop hard drive. This is the first time ever I've had to think about hard drive space. Some photos have already been shuffled off to an external drive. I need to figure out if I want to keep any significant number of the photos I take, or just the ones that have been tweaked in Lightroom. Still thinking. The latest batch of photos are 25 to 30 MB each. EACH. I took nearly 1000 in one weekend. That's 25 to 30 GB, which is a good sized chunk even on a TB sized drive. Good thing they aren't expensive. Also thinking about just how big a dedicated photo drive and backup needs to be. Lots of fun. Still lens shopping. Any advice?