Linda and I had a long and serious discussion over dinner tonight. (BBQ chicken on a bun, w cheese, if you were wondering.)

It's Canada Day today. (Yay us! Go team go!) We didn't do anything special. The serious discussion was about when we did something special for Canada Day. Last year? Two years, three? More? We clearly remembered wandering around downtown, having fun, taking part in the festivities, nibbling from the food trucks, watching the fireworks. But when?

In the end I had to consult this very blog. It turned out to be two years ago. Remember how you used to say your older relatives were getting a bit dotty? I fear that is becoming us.

Then again, I was out for a run today in the hot sun. 11 K, 1:15, 6:49 pace. It was all good, till the last three K. I was fresh for the run up to the reservoir, then in the shade to the top of the hill and back. Then out in the sun for the last 3 K and I was beginning to feel the heat. It was cloudy when I started, 19 C, so I wasn't as thorough with the sunscreen as I should have been, and I'd left my sunglasses in the car. The sun came out, it got up to 23 or 24 C, and humid for Calgary. Maybe this explains the dottiness. I hope.

The rest of the day was sleeping in after a very weird night. Not dreams, at least I don't think so. I woke up at 2, listening to a rumbling diesel. Not the police helicopter that wakes me up sometimes. I wandered out to get a drink, and peered out to see a huge tow truck hooking up a somewhat smaller one. Behind that another big tow truck had hooked up to a commercial truck of some kind. Bigger than a cube van, but smaller than a semi. Several normal sized tow trucks were nearby, watching. All the same tow fleet. No idea what was in the truck that required such a big tow truck. After a while the convention moved off, amber lights flashing. I was wondering if I could work that into my book, but didn't get anywhere.

Linda found more pots, and got a great deal on them. Right now she is out filling them with flowers. The garden is mostly recovering from the battering earlier this week. Most of our closest neighbours had some water in the basement. 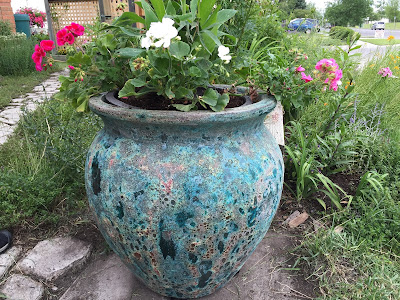