It struck me I hadn't done a race report in a while, which I suppose is the inevitable result of not racing in some time. In some senses today was a very cerebral race for me, so I thought I'd talk about the whole experience.

I'm what you call an adult onset runner. I ran in high school, then nothing to speak of till about 9 years ago. It's been a long slog, trying to build milage. I'd get to about 10 K, then it seems I'd push too hard and have to rest.

I was a swimmer, but as the triathlon saying goes, you can't win a triathlon in the swim, but you can lose it. You can win it with a strong run, which I don't have. Again and again I'd get out of the water in a reasonable time, and then everyone would pass me on the bike. The only reason people didn't pass me on the run is they had already finished.

For whatever reason I've wanted to do a stand alone marathon for a while. This year I got serious about running consistently. As I got to a long run of 10 K, I stayed there for a while, till it felt comfortable, then started adding distance again. It really helps to have a run buddy who is amiable about distance, doesn't care about route, and naturally runs about the same pace I do. (Hi MC!) 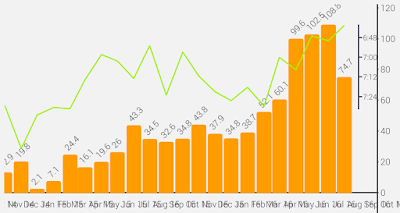 Gradually the distance grew, and the times got a little faster. One of them she snuck in a faster pace on me because I hadn't been paying attention, which sort of got me off the plateau I'd been on. All good. Then the 10 K earlier this year was essentially an hour, which was a surprise to me. My weight had been slowly creeping up a bit since Ironman, but this year it's been sliding back down. That helps the running too.

This race was a big step for me, to see what my time was, see how I felt. I've no need for another medal or shirt, so the MEC race was the right venue and the perfect time. This is the first one of their's I've done, and I'm impressed. The race experience was flawless! It started on time, there appeared to be enough volunteers, the aid stations were where expected, and a good time appeared to be had by all. There was the faintest rain shower during the race, and shortly after I finished it started coming down cats and dogs.

I didn't have specific goals, though my recent training had me thinking I wasn't likely to be faster than 2:15 (a 6:24 per K pace or so) and I wanted to be faster than 2:30 (just over a 7 per K pace). I pretty well nailed it, so I'm quite pleased. I deliberately hadn't looked up previous half marathon times, and it turns out this is only a few minutes slower than my fastest one. Yay me again!

The pace right from the start was surprisingly fast. Within the first K I was running nearly alone, a few behind me, most out in front. It took a few K to settle into the groove, and I chugged along averaging about a 6:10 pace. I was happy and comfortable, and would have been able to chat, if there was anyone to chat too. For most the race I was leapfrogging a woman doing a walk run, but we didn't talk.

About 9 K I was getting some chatter from my legs and I slowed down a little, then about 12 K my pace fell again to about 6:30. K's 14 to 18 were tough sledding, with my pace falling to 7 per K. I was focussed on keeping my legs moving, thinking about my posture, trying to keep my hands and arms relaxed. I was determined to run the whole thing, no walk breaks. The cadence stayed about where it was, but I could feel my stride shortening and becoming stiffer. I got passed by a couple people that had been staying behind till then. I still wasn't breathing any harder, but my legs were starting to protest. I kept moving. There was a funny niggle up the outside of my left thigh to behind the hip bone. Never had that before, but kept my feet going. It got a bit easier as I got closer.

I tried staying with the people that passed me, but they ever so slowly pulled away. Sometime during the last mile I got another wind and my legs picked up, so the last K was a 6:20 pace.  Photos and buddies and bananas at the finish line!

The phone thinks the half marathon pace was 2:16:57, which is nearly exactly what I ran the 2010 Hypothermic half in.

I think it's clear I need to work on leg endurance, to be able to keep running at a desired pace. Core. Hill work. Hope it doesn't snow for Oct 22, MEC race 7. 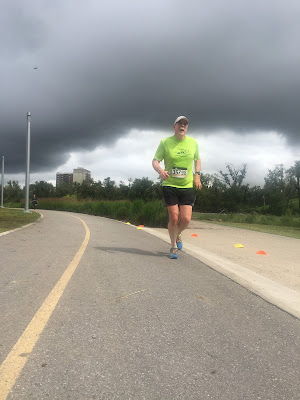 And a couple more, credit Ken. This qualifies as a focussed look, I think. 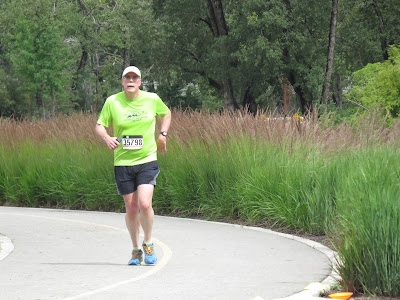 My buddy Patricia, happy after a great race. 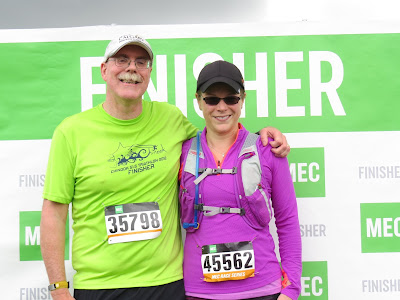