Shooting a swamp, then this happened

There I was, deep in the heart of Fish Creek park trying to get a shot of trees reflected in the swampy water, when I got that watched feeling. I turned around and there it was. 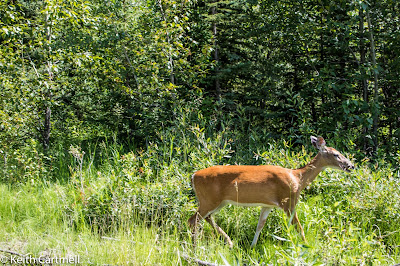 As soon as I moved, it started trotting off. I've no idea what the camera settings were, I just clicked off a bunch of shots, and this is the best of them. It was probably 10 feet away there, wary but not frightened.

Out of the 188 shots I took, many are garbage where I was experimenting with camera settings. This is to be expected. Some are ok, though a few of them I wonder what the heck I was thinking. Some I played with just to start learning Lightroom. There are 5 or 6 where it looks like I nailed it, and the shots right out of the camera are pretty good. I'll be tweaking them a bit more and will publish them. I got that Facebook nature photo challenge so they will end up there and here. Just to fill you with anticipation, it's swamp water. I know, you can't take the suspense. Sorry.

Earlier this year I found that someone had been creating art with rocks in the Bow River near Crowchild. I guess their younger sibling is just learning. I found this Inukshuk in Fish Creek. 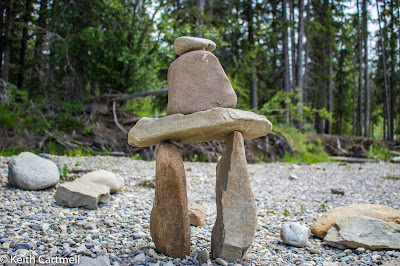 Today was a long run with my ex-work buddy Patricia, and the famous Michelle. I'd been wanting to do Bowmont park in the far NW for a while. I'd hoped to have a native guide (Hi Leana!) but her life has been a whirlwind lately and the timing hasn't worked out.

This is a stunningly beautiful run! I'm going to have to do this one again, even though it is on the other edge of the city. Great views (bring a wide angle lens!), good hills either way, nice breeze, a porta-potty just where one was needed, what's not to like? 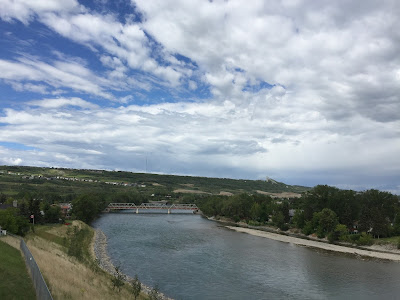 Along the way we saw this giant raptor bird. All black or dark gray. Too big to be a hawk, I thought maybe an eagle with that huge hooked beak, but Patricia thought maybe a vulture. Doing a bit of research it might have been an immature bald eagle. Pity it turned it's head just as I took this. Birders? 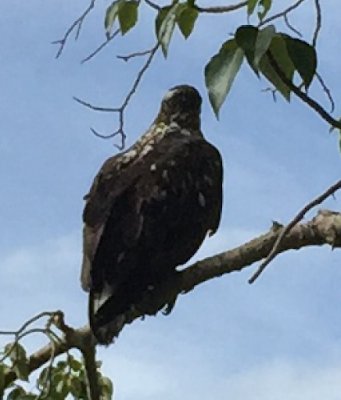 15 K, 1:45:30 for 7:02 pace overall but I walked one hill and that slowed me down. Breathing was good, legs feeling tired. Even so, I'm all signed up for the MEC half marathon July 16. If I'd been on the ball with planning training properly, I'd have done a somewhat shorter run Friday, and the 18 today. Oh well.

As I was getting ready for the run, Celina was giving poor Curtis an earful, and tried to dominate him. Good luck there. Home again, the cats ignoring me as I'm using the laptop. They're deeply involved in important cat business. 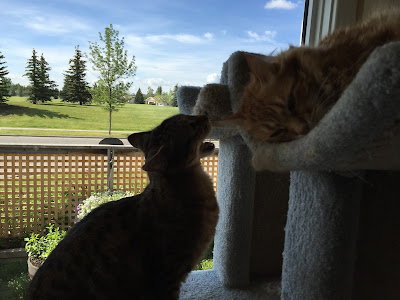 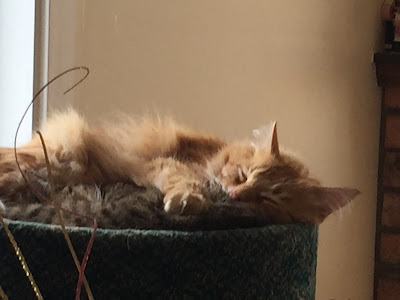