This is a major life achievement goal I set for myself last year accomplished. I am so pleased.

First thing is some thank yous.

My wife Linda has supported me, made me put on sunscreen, and put up with the 4:30 am runs. She's helped in a million ways I can't begin to describe. Her scrubbing my feet this afternoon, for example. First of all she didn't put on rubber gloves. Second, it felt great!

My coach Iron Greg Bradley. Let us not understate what he has done here. He took a guy turning 50 soon, about 50 pounds overweight, that hadn't run since high school. Just about my first words to him were "I haven't run in 30 years, and I want to do a half ironman next summer, am I smoking dope?" I will be forever grateful he didn't burst out laughing. Greg has been great, building a plan, bringing me along slowly to avoid injury and over stressing an aging bod. Thank you Greg! Lets have a big round of applause!

My friend Susi. You couldn't ask for a more helpful and enthusiastic person to have around.

There's a ton of others as well, blog buddies, friends, and co-workers who have all been supportive and encouraging.

Finally the number you are all dying to read. It's less than 8 hours, so I'm happy. That was my goal. To finish.
Swim, about 38 minutes, then out on the bike course at 45 min.
Bike, about 3. 75 hours, into a headwind on the way back, which is a bit unusual
Run/Walk, the better part of forever, except for where my new friend Kelly and I essentially walked the last 3/4 of the last lap together.
Total time 7:40 or so.
The official results were posted at the banquet, but I didn't look at them. There will be time tomorrow, or later, when they're actually posted on the web.

I'm really pleased with the swim. There was a tough time just after the start where I was getting squeezed a bit. The second lap was much better, though I had a bit of a nasty cramp in left calf coming out of the water after the first lap. I don't know how the heck you're supposed to seed yourself when nobody was talking about times. I probably went out just a little hard at first, since my second lap was about 2 minutes slower. My friends Sean and Lori joined Linda to see me into the water, and cheer me onto the bike! Thanks! There were a ton of bikes in the transition area when I got there. Then most of them passed me throughout the course.

The bike went pretty well as expected. The time is dialed right into what I've done on my training rides. I DIDN'T EAT THE PASTE! I rode my pace, passed a few people anyway. Kelsey caught up to me at about 33 K after a tough swim, I passed her on the down hill again, then she passed me and was gone. Chatted with Kelsey's buddy Graham at the half way point. Good ride back into a headwind, feeling reasonably strong. There were lots of bikes in the transition area again. My buddies Gord and Gail were there to see me in, which was a nice surprise. Thanks!

I ran most of the first loop, getting passed a lot by people doing their second lap. Hot. EFFING HOT! Poured lots of water on my head. Did the first lap in just under 1.5 hours, then pooped out. My run times started getting shorter and shorter. I'd promised my feet if they got to the end of the first lap in good time, we would walk as much as they felt like in the last lap. Kelly caught up to me at an aid station, and power walked me through. We had a great chat. Thanks! And actually, the second lap was only a little slower than my first.

Linda was there for the finish. Classy medal. Drank cold choco milk. Went for a bit of a dip in the lake. Packed stuff. Walked slowly back to the car. Showered, did a bit of stretching, and humped Estela and stuff out of the car. Not a second's problem or worry with Estela, she was a total champ! Sunscreen missed a couple spots, the back of my calves, and the back of my right arm. That's not so bad.

Lastly, the event itself. If you missed a turn, or got lost somehow, then you might as well kill yourself now because you're to stupid to function in the modern world. You couldn't ask for better signage. Every corner was marked, lots of straightaway signs even. The volunteers were EFFING AWESOME!!

So in summary, I had a good day. I've proved to myself I can do this. I had a good time, and I'll do more. I probably won't do Sylvan, though I'll discuss with Greg. I think I'd prefer to put the energy that could go into Sylvan into more training. I've got to leave for the banquet in a few minutes, but maybe I'll come back later and add more detail, and see what photos exist on the camera, and what the finisher photos look like.

This is really the only finisher shot that I liked, and the other is of the medal. It's actually pretty classy, sort of an etched pewter. The girl in the photo with me is Kelly.

I'll be watching for Susi on the internet at IMCDA tomorrow. GSG! 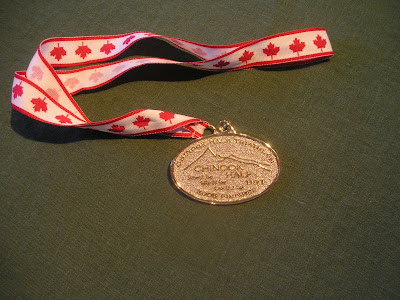