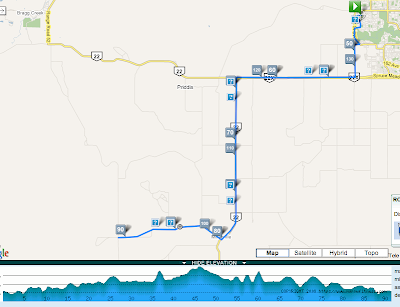 Recovery is all very well, and necessary, but I've been feeling pretty good lately. My theory is that the only way to find out your limits is to try to pass them. Cautiously of course, with suitable thought given for the attempt and possible consequences.

I had mapped out a nice 110 K loop out 22x, down 762 to Millarville, across 549 to the Road to Nepal and back home. The Millarville General Store is about the 70 K mark; a good place to rest a bit and water up for the hills to come.

Starting out about 8am today I promised my legs that I'd pay attention to any messages and modify my route accordingly. It wasn't long before I got the message loud and clear that I was ok for easy spin and the flats, but I wasn't up for big hills. My calves are still tired. As long as I was smooth, things were good. Push too hard and I'd get into a pre cramp feeling. It's odd though, I still felt strong, within my limits. I was comfey on the bike, though my toes were going to sleep a little.

So that ruled out Road to Nepal. You can see my actual route to the right. My goal thought was, high cadence easy spin, low heartrate, no concern about pace. I'm actually pretty pleased. It was a beautiful day for a ride. I got out before it got hot, and it's only when I was almost home again that the heat started to soak in. The mountains were stunningly beautiful.

I took along lots of nutrition, since I was hoping for 110 K. 4 Cliff's bars, 2 bananas, 2 energy drinks, and a water bottle. I finished all but a bit of the energy drink and there was a Cliff's bar left. For a 3.5 hour ride, I think that's right in the ballpark.

There weren't all that many people out riding on the out leg. Waved at most of them. Oddly enough, even though I didn't need to go, much of my thinking was about the mechanics of peeing while riding a bike. I'm just assuming that riders don't go in their pants. I tugged a little at my shorts leg. There is no way that is coming up high enough. That leaves dropping the top, and here things get interesting. My assumption is that correctly done there isn't any on you, your bike, or anyone else. You've got one hand to manipulate the material, and the junk. It seems to me that you drop the pants enough to moon the world, sit sort of sideways, and away you go. Lets hope nobody is behind you. That's the out the bottom model. Just for comparison, I considered the "over the top" model, where the front of the shorts comes down, and you twist sideways somehow. This might work if you're much longer than average, but the odds aren't good. It passed the time.

So there I was at my turnaround spot, thinking about bio pressures, or the lack thereof, and decided to eat my banana first. Just as well. You know how it sometimes happen where you go from being all alone to being surrounded by company almost instantly? That's what happened. I wasn't two bites in when a guy pulled over, hopped out, and asked nice where Millarville was, and how to get there. Gave him directions. A small herd of motorbikes thundered by. Just as I was finishing the banana, two more riders came to the intersection coming down from Bragg Creek. We chatted a bit, then rode to Millarville together. They were going to turn around and go back, and I kept on going.

There was a guy way ahead of me, so that became my goal. Pedaling steady, try to reel him in, as the saying goes. It took a long time, but I finally caught him near Red Deer Lake school. The winds were light, and there were a bunch of times I was surprised how fast I was going. There are days I think I need to check my bike computer and make sure the wheel size is set right.

Here's the numbers for those who want to know. My spoke magnet fell out to the rim a few Km from the house, so the numbers aren't totally accurate.

My weekly totals essentially consist of this ride, and a bit of swimming. Looking to get back on the training bus tomorrow.